Hello, friends. I apologize for the late post. I just mentioned in yesterday's Friendly Fill-Ins challenge how I find technical difficulties to be an inconvenience, and perhaps I jinxed myself with that comment. My laptop and wifi have not been getting along, and so I have not been getting along with either of them, and so now here we are late in the morning with a late post. That's okay, though. Because better late than never, right?

Moving on. It's the third day of April, which means we've reached the third letter of the alphabet for the A to Z Challenge.

As we've mentioned, our A to Z Challenge theme is halfway to Halloween, because that is exactly what the month of April is. I've also heard this month called Halfoween, which I quite like the sound of. Anyway, we're doing spooky springtime doodles with Halloween details related to that day's letter. So, what does C stand for? It stands for cat-o'-lanterns, of course! 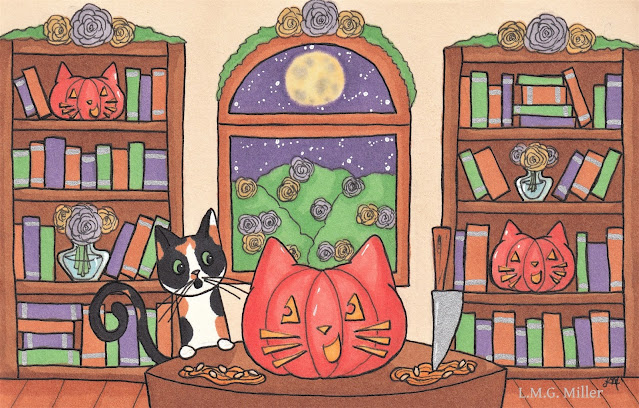 Poor Rosie. She doesn't seem all that thrilled that someone is carving up cat-o'-lanterns and leaving them and their guts scattered everywhere. Maybe by the end of the month Rosie will come around to the idea of Halfoween.

Trivia of the Day

According to some sets of data collected over the past couple of years, Pumpkin is often amongst the top 5 names given to ginger kitties. The collected data would indicate, though, that Pumpkin has not been the very top name for orange cats as of late. Instead, it's often beat out by names such as Leo and Tiger. Have you ever met any orange cats named Pumpkin? What about Leo and Tiger?

Very cute drawing. Pumpkin was one of Prancie's nicknames. :) XO

No cats named Pumpkin here. No Leos or Tigers either. Your artwork is adorable.

Halfoween is the best, Rosie!

Maybe she likes Halloween, but doesn't like that someone is making and leaving a mess lying around!

We can see why Rosie might be a little bit confused. But she sure is cute!

In the almost 24 years I've been volunteering at the shelter, we have had two orange cats named Pumpkin. :)

Mummy doesn't know any orange/ginger cat called Pumpkin, but She has named one of the street cats She feeds Mishmish, which means Apricot. Now that you have put the idea into her head, maybe she will call one Pumpkin. There are LOTS of orange/ginger cats on Our Street.