Tonks Tuesday and the Letter W

Today, Tonks wanted to show off a couple of her favorite toys. 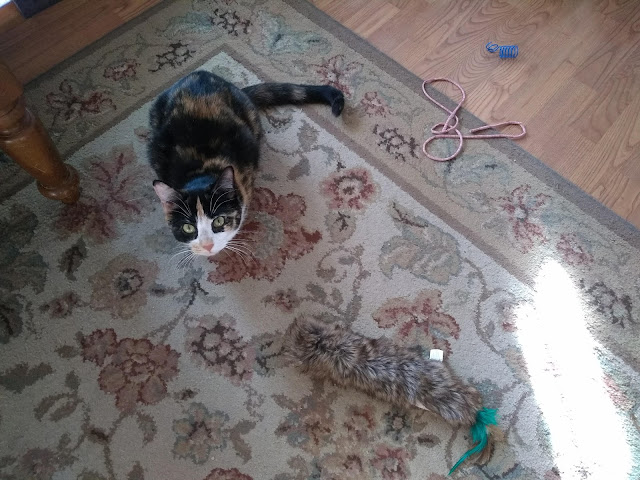 Camouflaged in the rug is a fuzzy kicker toy roughly the same size as tiny Tonks. We we got that for Christmas from our wonderful Secret Santa Paws, that being the crew over at Tomcat Commentary by Tim. Tonks absolutely loves this thing, and she has some pretty active and epic wrestling matches with it. You'll also see a cloth pink ribbon next to her, which she loves to chase if I run around the room with it. That's quite a spectacle, I'm sure. And in the upper right is a fun little coil. It's bent because I stepped on it, but Tonks now seems to prefer that one over the non-maimed ones. The coils are currently Tonks' favorite toy with which to play fetch. For hours. And hours. On end.
Tonks hopes you all have lots of fun today!
***
Shall we move on to one of the final days and letters of the A to Z Challenge?

Today's letter is W. Since our weird and wacky theme is halfway to Halloween, or Halfoween, W of course stands for witch. 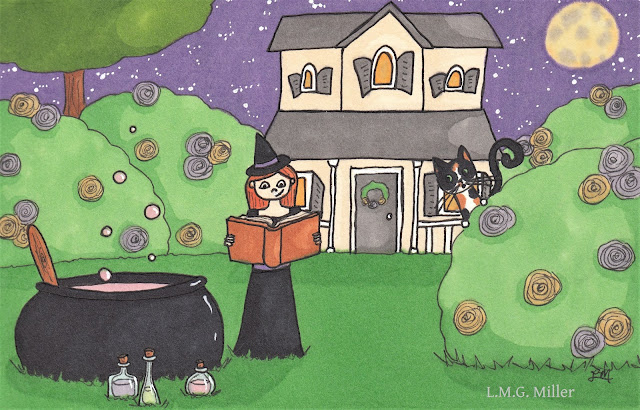 Have you ever heard of the Celtic folklore surrounding the idea of the cat-sìth? The common concept is that the cat-sìth is a fairy creature that looks like a big black cat with a white spot on its chest, and it is said to haunt the Scottish Highlands. Some versions of this folklore vary a bit, though. For example, one version indicates that instead of being a fairy, the cat-sìth is actually a witch who can transform into a cat nine times. On the ninth time, the witch remains a cat forever. And that is one of the potential origins of the common saying that cats have nine lives.

Posted by The Menagerie Mom at 9:27 AM

We have a bunch of those coil toys too and you're right - they seem more fun when they've been squished around a bit.
We'd never heard of the cat-sith - that's a cool story.
Love your wonderful drawings - so cute and fun!
Midnight & Cocoa
Mini & Fluff
Tyler & Marty
Beeb, Beanie & Bella

Tonks, thanks for reminding me to move all of the furniture to find where Da Boyz have kicked all of their spring toys!

Tonks is a cutie. Those look like some fine toys. Cute drawing too. And I had never heard that Celtic tale. very interesting.

Those are some fun toys, Tonks!

That's quite a toy, and a very good doodle!

Wow, Tonks. You sure do know how to have fun!

Mom Lorianne, we love your doodle today. We wonder what fun that witch is cooking up in her cauldron?