Some poor boy is going to the dreaded V-E-T today. 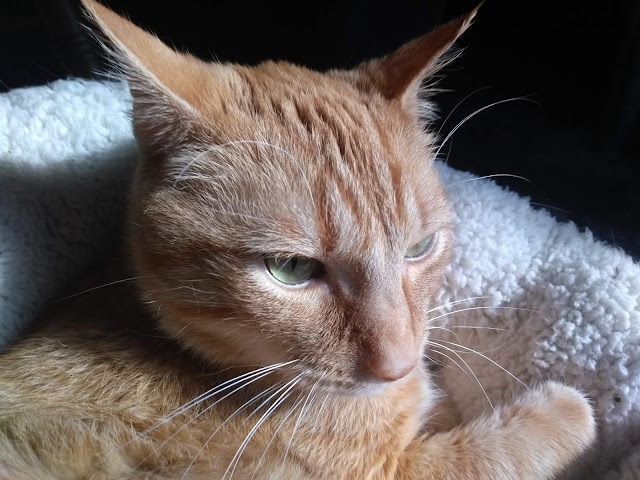 Nothing all that major is going on. Evan has had urinary incontinence for a couple of years, and a couple of times he has ended up with a UTI. As Evan's veterinarian has mentioned multiple times, UTIs can be very common not only in cats who are paralyzed like Evan, but also those with urinary incontinence. Evan has both of those going against him.
The only sign Evan usually shows when he has a UTI is increased urinary incontinence. He'll urinate in his sleep much more often, and often with much more volume of urine. He'll also more or less constantly drip urine when his incontinence is at its worst or has turned into a UTI. All of that also leads Evan to be very difficult to keep clean and dry on his paralyzed rear end, which means he needs constant sanitary shaves and all that good stuff. Evan is displaying all of those signs again, and so he's going in today to have his urine checked again. If he doesn't have a UTI, then he's just having a bit of a flareup with his urinary incontinence, which has happened before and is totally fine. If he does come back as having another UTI, he'll get some trusty antibiotics and all the extra cuddles he could ever want. Well, he'll get the cuddles regardless.

Evan's not thrilled about being dragged to the vet yet again, but he still wishes you all a magnificent Monday!

For this reason and that, this time in 2019, I shared some doodles inspired by the Harry Potter series. I grew up when that book series was new and incredibly popular. As a child who loved to read, especially fantasy books, I was all for it. I still enjoy reading the books and watching the movies. Anyway, after reading and watching the Harry Potter series again recently, I decided to share a couple of my favorite old Harry Potter doodles I scribbled up in 2019. Like this one, with a kitty on her way to learn all sorts of magic. 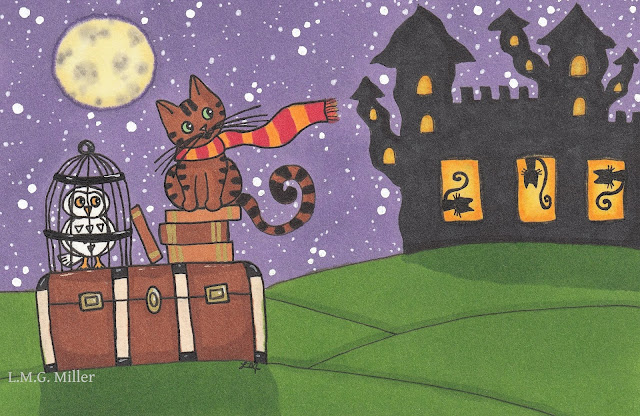 Today's tip in our litter box series is all about cleaning that litter box. A clean litter box is very important for keeping your cat healthy and happy. Cats are very clean and particular creatures, and so a dirty box might drive them away from using it. That is why an unclean litter box is one of the primary reasons why some cats begin urinating or defecating outside of the box.

So, as you all certainly know, be sure to scoop the litter box, or boxes, regularly. Scooping once a day is recommended, but more often, if possible, is of course even better. Twice or three times a day helps keep the litter box odors at a minimum, and of course helps your kitty stay healthy, happy, and with somewhere clean to use the restroom. You may also need to alter the number of times per day you scoop based on the bathroom habits of your particular cat, or cats. Some cats only go once a day, and so once a day scooping would likely suffice. For cats who go more frequently, though, more frequent scooping is of course a better option.

Cleaning a litter box doesn't just stop at scooping it, though. Doing a full clean of the box, which involves disposing of the old, dirty litter and scrubbing the box down, is also recommended on a regular basis. The frequency of a full litter box clean might vary, depending on your particular cat's bathroom habits, and even depending on which professional you might ask about this topic. If possible, try doing a full clean of the litter box once a week, to keep the box squeaky clean and your kitty healthy and happy. If that's not possible, perhaps at least try for once a month. After disposing of the old litter in the box, you can scrub it down with a safe cleaner. This might be warm water with dish soap, vinegar and water, baking soda and water, or another pet-friendly cleaner that you are certain will not leave behind any harsh or hazardous chemicals. Once the litter box is dried, you can add fresh litter, and even a bit of baking soda or other pet-safe deodorizer.

Litter box cleaning may not be a desirable chore, but it's a crucial one. To prevent your kitty from avoiding the litter box, or from simply having to suffer the discomfort of using a smelly bathroom, be sure to keep the box nice and clean. So, do at least daily scooping, and roughly weekly scrubbing, and your kitty will likely be very happy with you.
Posted by The Menagerie Mom at 12:00 AM

POTP coming your way for Evan.....hope he is OK!

Aww, Evan...hope the vet person makes you feel all better.

Oh Evan I wish you did not have to go to the Vet but we bet you will feel better soon. And it will be easier if you are drier too. Purrs little friend

Poor Evan, I hope he feels better soon. I like the drawing and your tips.

Lots of prayers for Evan that all is well.