Hello and happy Thursday! We can get to rhyming now, thanks to Angel Sammy's Thoroughly Poetic Thursday challenge.

As usual, our host shared a photo prompt to guide us as we get poetic. This week's prompt is this mesmerizing one here: 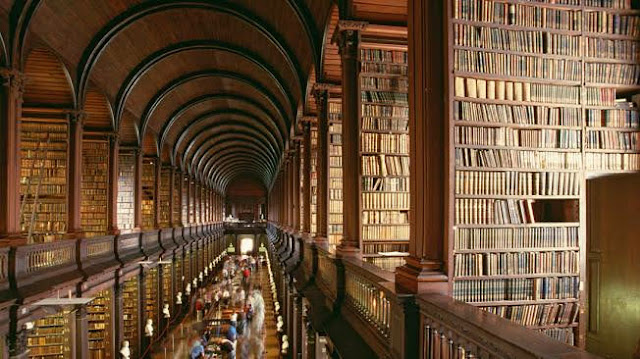 I love that image. I love any image with books, libraries, and you get the idea. This image did give me an idea for a poem, and though I thought it would be one of my usually long poems, it ended up relatively short for me. If you're curious to read it, here it is:
Laz and the Library
Once upon a time there was a girl named Olive,
Who quite enjoyed gaining this thing called knowledge.
There was nothing more in the world that she liked
Than her beloved library that stood three stories high.

This library held books from floor to ceiling,
Which you could read at a table or even a balcony.
This library's options were endless for what to read,
And for where to sit and which view you wished to see.

Olive once began reading a riveting tale
About pirates who in a grand ship did sail.
Then, lo and behold, on the book Laz did sit,
And the cat had not a single qualm about it.

Then Olive began a book about a witch,
And, you guessed it, on it Laz did sit.
So Olive moved on to a book about the stars,
And on that one Laz next did park.

How was Olive supposed to read?
If beneath the cat her book she could not see?
And that is why Olive read so many books at once.
Because when Laz the cool cat sat on one,
The reading of a different book indeed begun. 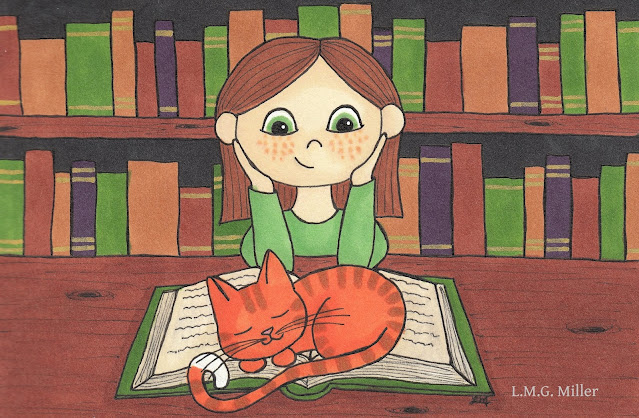 That there doodle is a flashback from 2019, and I'm fairly certain I already re-shared it in the past few weeks. But, the true illustration for the above poem is actually a recreation of this one, but I'll be sharing that new one on Saturday. I meant to have it done for today, but I've had to work quite a few extra hours at work this week, so Saturday is when you will see that new doodle instead. The crazy work week is also why this post is going up so late today, but I digress.
***
Now it's of course time to give thanks, which is easy to do with Brian's Thankful Thursday Blog Hop.

On this hot summer day, Thimble is grateful that she used her adorable face to beg for some window whiffies. 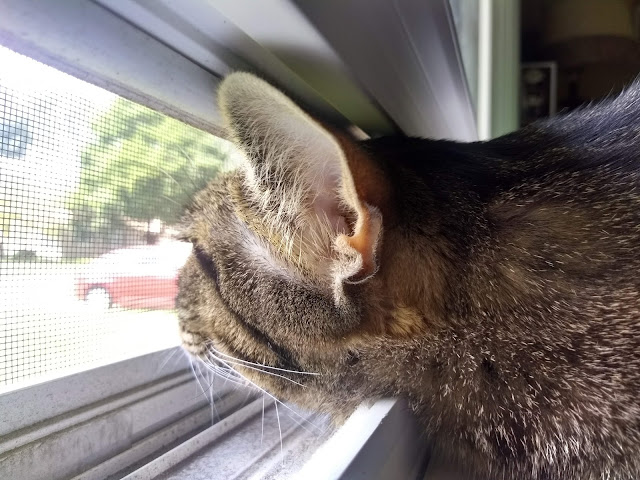 She'd be even more grateful if the window wasn't only just barely open, but she's thankful nonetheless. 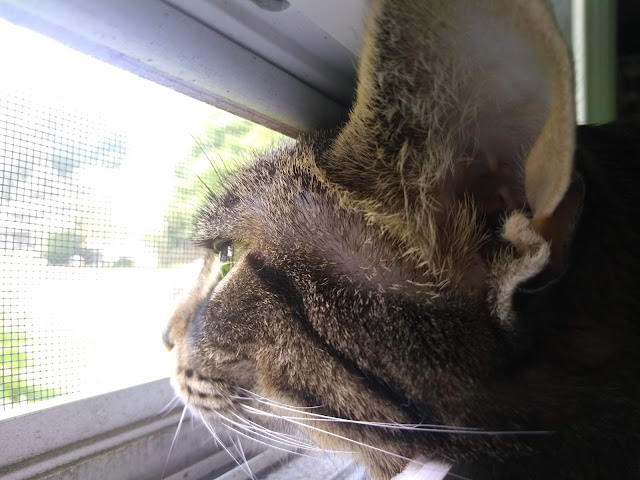 We'll see you tomorrow, friends!
***
Tip of the Day
Believe it or not, we still have a couple tips left in our litter box series. Today's tip is to consider regularly replacing litter boxes as they grow old and overused. Some cat care professionals recommend brand new litter boxes on a yearly basis. At the very least, do take note of how old your cat's litter box is and what shape it's in, and replace it as needed.

There are a couple of considerations to make when deciding whether or when to replace a litter box. First, keep in mind that plastic litter boxes can become adorned with scrapes and scratches from cat claws, and those scratches on plastic litter boxes can ultimately harbor a variety of microbes. This can, of course, ultimately lead to potentially unsanitary conditions within the litter box. In addition to that, ammonia and other components of excrement can potentially leach into the plastic of litter boxes over time. This can make lingering odors, such as that of urine, more or less permanent, which could very well be unpleasant to those sharp noises of our kitties. The aforementioned are just two reasons why regularly replacing old litter boxes may indeed be a good idea. As we've said before, maintaining a fresh, clean litter box can be crucial to sharing your home with a happy, healthy feline.
Posted by The Menagerie Mom at 11:29 AM

Chili Bruce sits on my newspaper, so I can no longer work the Sudoku puzzle.
I know that he knows the answers, and he's just blocking me to prove that *I* cannot solve the puzzle...and he's usually right.
Smartyboots!

Cats and books...what else is there? Thimble, you're going to get a crick in your neck!

Wonderful poem - great way to get a person to read more! That library is one that my Mom and Dad say they will NEVER forget visiting when they were in Ireland.

Something fun is out there Thimble. Great poem!

Cats do love to sit on books, or newspapers, or anything square or rectangular. In fact, science has shown it's their favorite shape of anything to sit in/on, although no one knows why. It does explain their love of boxes, though.

Thimble, i'm glad you got window whiffies. It's hot enough here that we're not doing that right now. Our window unit A/Cs are struggling enough as it is.