It's rhyme time! In other words, it's time for Angel Sammy's Thoroughly Poetic Thursday challenge.

As always, our courteous poetic host shared a photo prompt to help guide us. This week's prompt is this image here: 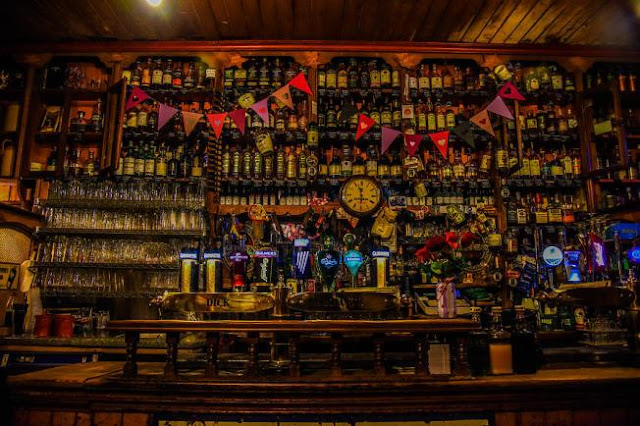 Perhaps it's just because I'm sitting over here in the July wishing it were autumn and time for Halloween, but when I first saw that image, I pictured a bunch of potions or apothecary bottles. So, I melded that idea with the reality of the image and ended up with this exceedingly weird poem:
Bubble Bubble Brewery
Chuck had a rough day at work.
Nothing went right and his boss was a jerk.
As if to add insult to injury,
His car would not start due to a malfunctioning mystery.

And so there Chuck was on that sad night,
Walking down the street in his sad little plight.
Truth be told, he wanted nothing more than a drink,
Something to wash away the terrible day's stink.

Chuck told himself he'd visit the first bar he passed.
It took nearly an hour before he found one at last,
But he stopped when he saw the sign that read Bubble Bubble Brewery.
He mused, "That's a bizarre name for a bar, quite truly."
Even so, Chuck wasted no time heading inside.
He wanted a beer with a stiff shot on the side.

There were no other patrons inside this bar,
Not a single soul drinking, not near or far.
With a shrug, Chuck walked right up to the counter,
Behind which were lined bottles with labels reading Love, Luck, and Power.
Chuck had never heard of any beers by those names.
He was going to order one anyway, though, just the same.
That is, if anyone ever showed up to take his order.
Just then, someone indeed did round the corner.
Actually, it was not a someone who arrived.
It was an orange tabby cat with the greenest of eyes.

The cat jumped onto the counter and took a seat atop a book,
A book at which Chuck had not even bothered to look.
That's probably why he didn't notice that its title simply read Spells,
Just like he hadn't noticed the bubbling cauldron on the counter, or its smells.

The tabby cat atop the book on the counter meowed,
To which from the back of the little building came a responding shout.
"I'll be right there!" this voice did say.
Chuck shrugged and figured he had no reason not to wait and stay.

That's when an old lady in a strange robe of a dress appeared.
Chuck wasn't going to tell her that he found her pointy hat quite weird.
The strange lady said, "My name is Helga, in case you were curious.
Now, can I get you something to feel happy? Perhaps less nervous?"
Chuck said, "I just want something with a basic label.
A beer would do. Or, actually, a fuzzy navel."
With a gasp, Helga said, "Goodness me, I don't sell fuzzy navels here.
What a strange, strange request, my dear."
Before Chuck could reply,
Across the counter walked the cat with the bright green eyes
It pawed at the cauldron, which Chuck only just then noticed.
He thought, What is this place? And who is this hostess?
After staring at the cat and nodding her head,
The weirdly dressed woman named Helga said,
"Ah, I see. It's a special sort of drink that you need.
Coming right up, indeed!"
She ladled a green liquid right out of that cauldron on the counter.
It was as green as the tabby cat's eyes and looked like it might taste sour.
Chuck asked, "What kind of mix is this?
What's its proof? Is it good and stiff?"

"It's whatever mix you want it to be," Helga said
She gave him a strange look as she shook her head.
After a day like that day, Chuck himself just shrugged,
And then he gave the freakishly green drink a chug.
Chuck thought it tasted just a tad bit like sour apple,
But the other flavors had him far more baffled.
He asked, "What kind of cocktail is this?
Does it contain vodka, or is it something else I've missed?"
"Vodka? Goodness no!" Helga said with a horrified look.
Then she added, "This is a far superior brew from my brand new spell book.
I have given you something much, much better, Chuck.
You see, good lad, you're drinking liquid luck!"
The illustration for that there weird poem will be shared this weekend. Some of my newer doodles, like this poem's doodle, got put on the back burner over the past week while I finished some older projects before July started. With all of those projects getting wrapped up, lots of new doodles that have been sitting in limbo will finally be shared.

***
It's time to give some thanks, which is easy to do with Brian's Thankful Thursday Blog Hop.

Like yesterday, Thimble is sharing yet more candid, bloopery photos as her gratitude for today. These are also sequels to yesterday's photos, in which Thimble won the window seat in a window seat battle with pup Astrid. Thimble is of course so very thankful for her victory. 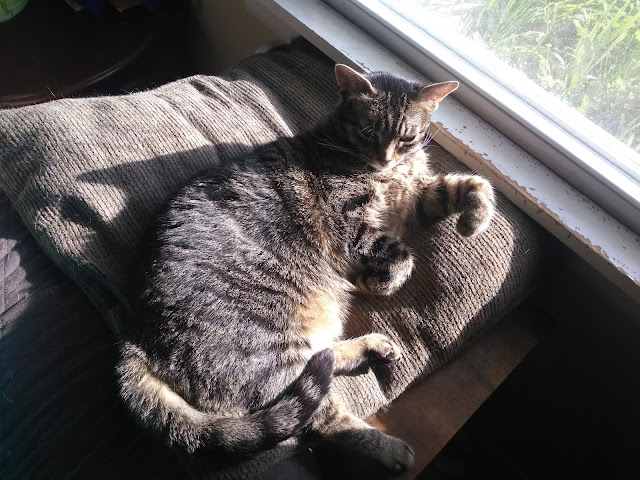 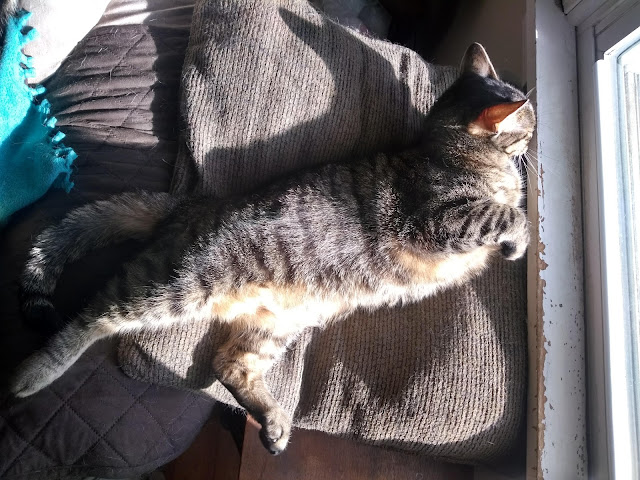 We'll see you tomorrow, friends!
***
Flashback Doodle of the Day 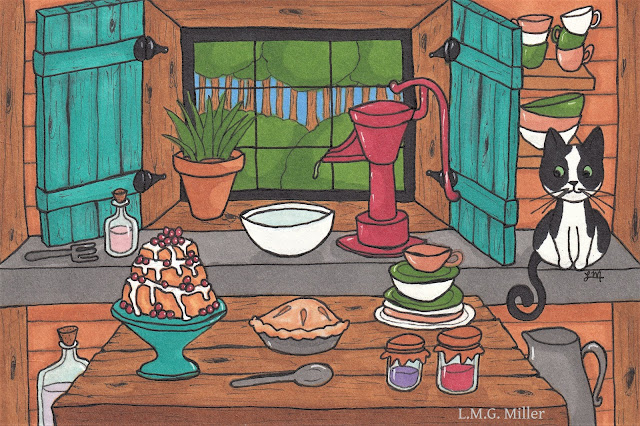 ***
Tip of the Day
Yesterday, we mentioned some of the benefits of growing cat grass indoors for your kitty. We wanted to offer a couple more tips in this same line of thought. First, you don't only have to grow cat grass in small pots from which your kitty can have a bit of a green snack. Another option is to create for your kitty a cat grass bed. For example, you could grow some cat grass in a larger pot, and some cats will enjoy this grassy environment for napping or playing purposes. Cats' ancestors out in the wild often live, sleep, and even play in this type of grassy environment, so why not our domesticated kitties?

Another option is to create beds or play areas out of artificial grass, which can again give off the idea of a more wild environment for your kitty. Most synthetic grass materials are safe for pets, but you should of course still always double check, or simply look for ones that are specifically designed to be pet-friendly. There are, in fact, artificial grass toys, scratchers, and beds that are specifically designed for cats. Did you know there are even artificial grass potty mats for dogs, or even cats? All in all, artificial grass is not only low-maintenance, but can also have beneficial effects for your kitty. It can offer them a place to play or snooze, all while mimicking grassy environments found out in the wild. If you think your cat might enjoy cat grass or synthetic grass in the form of a bed or play area, perhaps look into setting this up for them.
Posted by The Menagerie Mom at 7:03 AM

It's sun puddle weather for sure, enjoy sweet Thimble!

What a wonderful and fanciful poem for the photo this week! I would LOVE to "belly up to the bar" in a pub and have a big tall glass of liquid luck. That was a lot of fun to read - rather magical!

That is a heck of a Poem and we think Thimble likes it too. Or is she acting it out?

Good for you, Thimble! Oh how I wish it was autumn too. Your doodle is SO yummy!

I don't do bars so I like your twist- I would love a luck potion. :) Thimble does look pleased with herself. And those are great tips. XO

It sounds like Chuck's fortunes are about to change.