Hello and happy Thursday! We're here to rhyme, which is easy to do thanks to Angel Sammy's Thoroughly Poetic Thursday challenge. 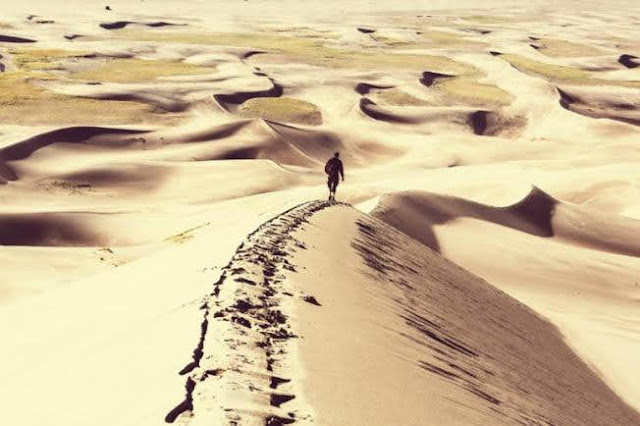 That desert looks a bit hot, and very sandy. In truth, I've been in a Christmas in July sort of mood, so I decided to take this image that route. So, here's that strangely festive poem:

Merry Christmas in Whenever

It was a desert,
To be quite curt.
It was hot and full of sand,
And cacti filled the land.

It was hard to know what month it was.
There was always sand on the ground and hot sun above.
That did not change once throughout the year.
After all, it was the desert, did you hear?

A traveler journeyed that way,
Wandering the desert on yet another hot and sunny day.
He stopped outside the desert's one, lone building,
Hoping inside he could do some resting and chilling.

Was the building a saloon?
Inside would he find a drink and meal to have at noon?
He also needed somewhere to sleep that night.
If he was lucky, the building would have a bed in sight.

The traveler walked through the building's doors,
So that out in the heat and sand he was no more.
He at least found exactly what he needed,
This building being a catchall with beds, food, and drink.

On the counter of the place sat the resident cat,
Who immediately claimed the traveling man's hat.
He had all but set it down on the bar,
And in it sat the cat, whose name was apparently Star.

An old man appeared behind the counter,
And the traveler asked him, "Is it December?
I quite honestly can't remember."
The man behind the counter replied, "Does it matter one beat?
Every day is the same in this land of sand and cacti and heat."

The traveler shrugged and said, "I heard Christmas music in another town."
The old man behind the counter looked at him with a frown.
He mused, "Could it be December, then?
In this never-ending desert I never know the what or the when.
Are they celebrating Christmas in July?
Or did December's Christmas sneak up as a surprise?"

Suddenly whistling Christmas tunes himself,
The old man began pulling out boxes from the counter's shelves.
The cat only then left the traveler's hat.
After all, boxes were best friends to a cat.

"What's in those boxes?" the traveler asked.
The old man opened one and pulled out a different sort of hat.
It was bright and red and really quite festive.
Then he pulled out ornaments, wreaths, and even more in the Christmas collection.
"If it's Christmas in any way,
We simply have to celebrate," the old man did say.

And so the man behind the counter, the traveler, and even the cat set to work.
Into a festive place the building was soon turned.
When they were done, inside and out the place was shining with festivity.
Really, it looked nothing if not Christmassy

"We're in the desert," the old man said.
Then he gave a scratch of his head.
"I never get right the month in this hot and sandy place, not ever.
And so, I guess, Merry Christmas in Whenever!" 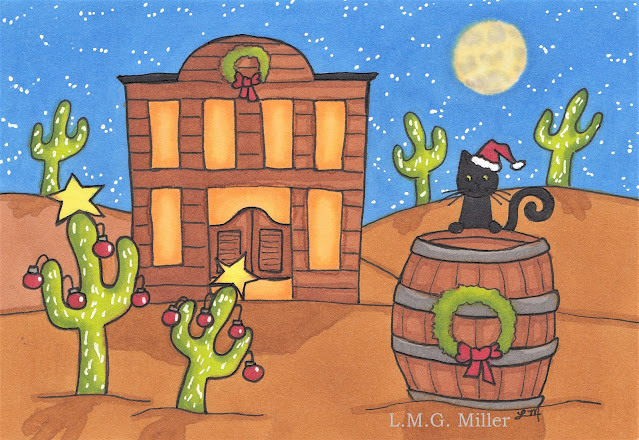 Now we'll move on to the poem for last week that I ultimately forgot to share. The prompt for that one was this fun image here: 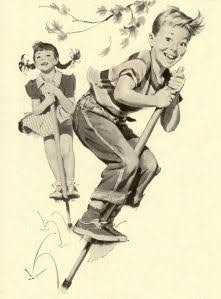 For whatever reason, when I saw that bouncy image I thought of Tigger from Winnie the Pooh. Technically and truthfully, my favorite character from Winnie the Pooh is Eeyore, because I'm over here rooting for the underdog. But, I also quite enjoy Tigger. So, I vaguely wrote a poem about those two, sort of, also trying to intersperse in there a few of those two characters' famous quotes. Anyway, here's the strange thing.

Thanks for Noticing Me

There once was a creature orange and bouncing.
He was bright and striped and a funny and feline sort of thing.
He bopped and jumped everywhere he went,
His energy never even slightly dwindling or spent.

And there once was a creature grey and gloomy.
He was sad, cynical, and something you might call doomy.
Have you ever stumbled upon the word lugubrious?
This sad, grey creature depicted that word in a way quite duteous.

There once was a time the bouncing orange one came along,
Singing and whistling a happy, bubbly, bouncing sort of song.
He hopped and skipped right into the path of the sad, grey thing,
Who never once in his life did hop, skip, whistle, or sing.

The one who bounced and sang did say,
"Well, hello there on this fine, happy day!"
The lugubrious fellow did shake his head.
"I guess the day could be worse," he then said.

All seemed fine until the morose one went on, saying sadly,
"I'm not sure how the day could be worse, but I suppose it could be."
The orange one bounced and bounced and bounced, racing.
He stopped only to say, "Oh, stop that gloomy roomynation!"

The lugubrious one looked as if a raincloud appeared overhead,
Until he just might have smiled a little, and then he said,
"A little consideration, a little thought for others, makes all the difference.
Having a friend like you might just sort of pique my interest."

The striped one of course bounced in reply.
Then he said, "There's no need to say ta-ta for now or goodbye.
Come on! Let's do some bouncing, friend, huh?"
"Thanks for noticing me," the grey one said, with only a little grump. 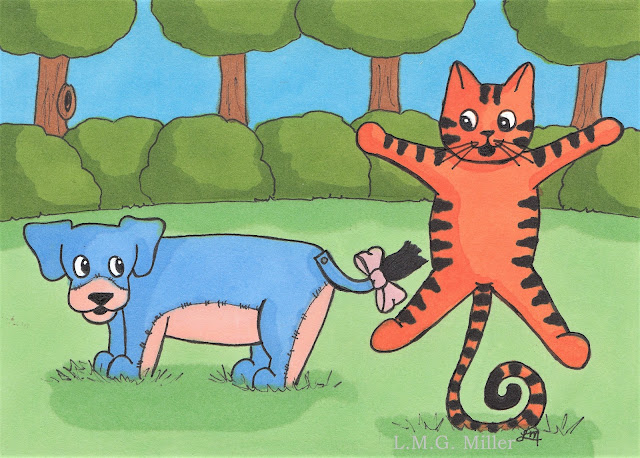 Thimble's going to begin by quickly saying that she's grateful for the idea of Christmas in July, which makes these hot summer days at least a bit more bearable. In honor of Christmas in July, Thimble is sharing a flashback of the Christmas tree kitty bed that always sits on the table in our library. Because what else would you put on a table? 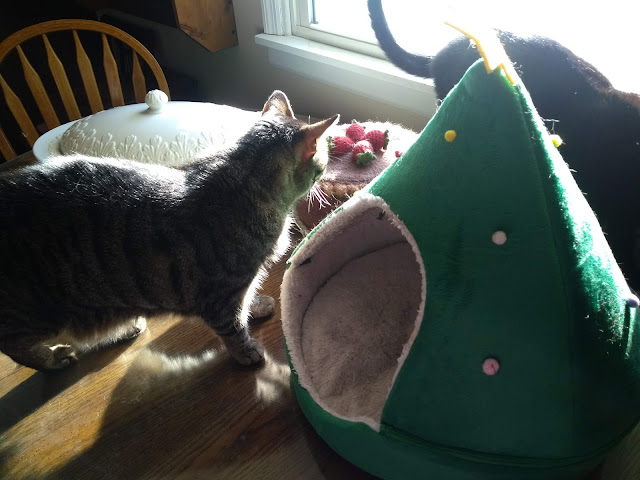 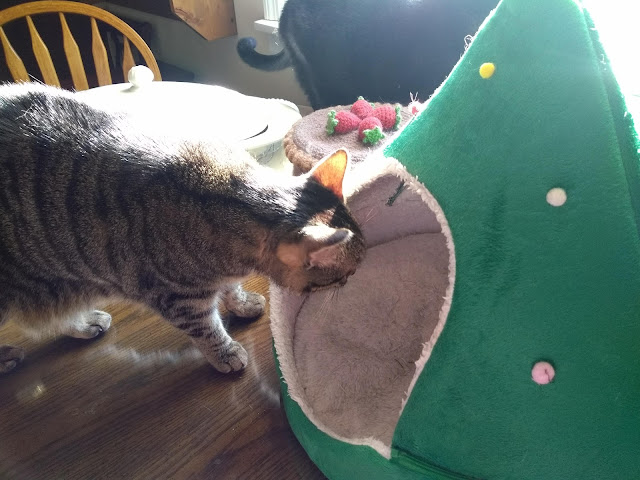 This here human and the resident furbabies are grateful for lots of things, of course including festive fun and Christmas in July. But do you know what we're most thankful for right now? That two of our online feline friends who had found themselves lost are now both back at home where they belong. Sawyer of The Cat on My Head was missing from home for 24 or so days, but his Mom Janet posted yesterday that he was finally home. We were beyond ecstatic to learn that! And Bridget of 15andmeowing was on a walkabout for a few days as well, but she's also home safe as of this early this week. Welcome home, Sawyer and Bridget! Now stay there please!

***
Tip of the Day
As we mentioned yesterday, we're doing a series of tips dedicated to none other than the litter box. Yesterday, we talked about choosing a type of litter box. Today, we're going to talk about the number of litter boxes you might need.
We're going to begin this discussion with a bit of an equation:
(# of cats) + 1 = (# of litter boxes)
That up there is the general rule for how many litter boxes a home should have, for the comfort of the kitties living there. Since we're a broken record, we'll say it again: the number of litter boxes should equal the number of cats, plus one. This general rule helps ensure that all of the cats in a home have plenty of options, something that is especially important in a multicat home. Finding a clean litter box, and not being bullied out of it, is more easily done when there is a sufficient number of boxes. As for single cat homes, the equation above still typically applies. Why? One reasons is that some cats don't like to urinate and defecate in the same box. Another reason is that, again, it gives them more options for a clean box, and can thereby reduce potential out-of-box behaviors.
Now that we have that little equation out of the way, we'll also mention that it's possible that not all of the litter boxes in a home should be or will be the same type. For example, do you have one cat who likes covered boxes, and another cat who prefers uncovered boxes? If so, then you should probably have litter boxes of both of those types. This ensures that each cat has a choice that suits their preferences. So, it's not only important to ensure that there are enough litter boxes, but that the boxes suit the needs of all cats present in the home.
Posted by The Menagerie Mom at 9:59 AM

We're so thrilled that the lost kitties have been found. I love that your Christmas bed is out year round :)

Excellent poems and drawings to go with them. And I love the flashbacks of Thimble with her bed. Excellent tips too. XO

Oh I don't think the poems are weird at all! They are as always from you VERY creative and clever and full of fun. Love the accompanying artwork too - especially the pogo-tailed kitty!!!! Thanks for playing poetry with us every week.

Christmas Whenever is a great idea!