I'll preface this review by saying that my feline furbabies can be, to put it simply, food snobs. When it comes to yummy, stinky, should-be-delicious moist foods, they'll often turn their noses up and walk away. Whereas some brands and flavors are gobbled up, others are barely nibbled at, if even at all.

My girl Thimble loves the concept of moist food, and she is the only kitty in the house who will wake me up in the wee hours of the morning to lead me to the empty moist food dishes. She often follows up this ritual, though, by simply sniffing the food I offer and sauntering off as if she has far better things to do, like talk to the closet door. Then there's Evan, who will sometimes show absolutely no interest in moist food at all, while at other times gobbling up an entire bowl of it and then moving on to the next bowl as if it might be his last meal. And Eddy, well, Eddy acts like moist food doesn't even exist. Honestly, the girl is infatuated with dry food, and that's it. Well, she'll eat bugs, too, but I guess that doesn't count. And housemate Toby's reaction to moist food is all over the board. He ignores it, he begs for it, he loves it, he hates. The boy doesn't know what he wants.

Despite all of that, I put out moist food every day. I used to work at a cat clinic where I'd see so many cats come in with everything from UTIs to urinary tract blockages, often in large part because the kitty simply wasn't taking in enough moisture. And so, even if only to make myself feel better, my kitties are offered moist food every single day.

That's why, when I got the list of goodies for this month's Chewy.com Blogger Outreach Program, I perused it in search of what I thought might be the most deliciously moist and enticing yet also natural and healthy food to hopefully attract my furbabies' attention. In the end, I chose Nature's Variety® Instinct® chicken formula. 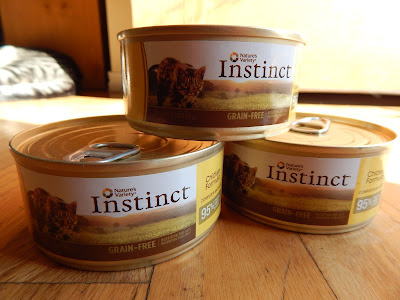 Nature's Variety® Instinct® chicken formula moist food is labeled as 95% chicken, turkey, and liver. The other 5% is vegetables, fruits, and other wholesome ingredients. Food like this always makes this momma happy, since the first ingredients listed are, indeed, real meat. This food is also grain-free and gluten-free. I also liked seeing that it was made in our very own USA.

So, this momma was very happy with this food's first impression. But, what about the furbabies?

Well, my little felines certainly seemed interested in it from the get-go. 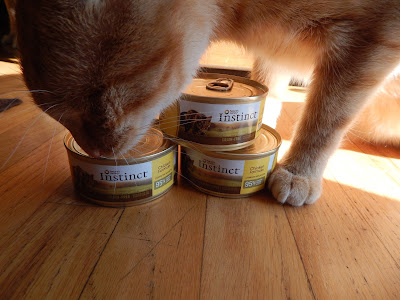 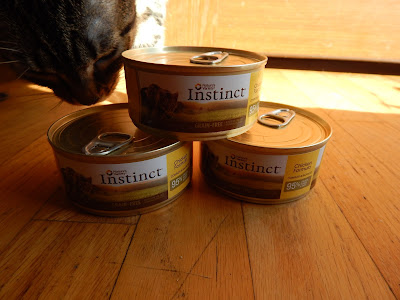 I couldn't even get a can of it opened before they were hovering over me like vultures. I hoped that was a good sign. I wouldn't know until I offered them some, though, and so I opened up a can and started divvying it out into their bowls. 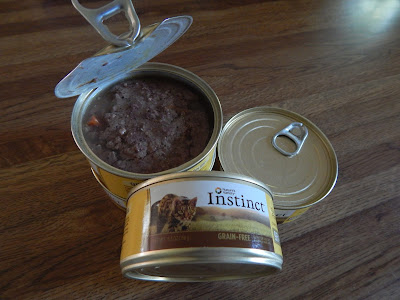 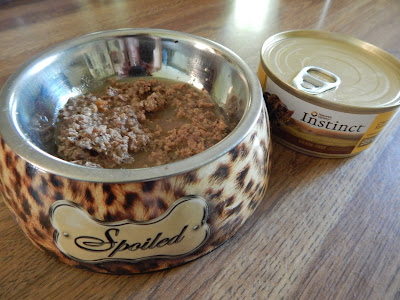 The first thing I noticed was that this is a very juicy sort of food, as it was sitting in a plethora of gravy. For me and my furbabies, this is always good news! If a moist food isn't, well, moist enough, my little felines won't even give it the time of day unless I add water to it. For this food, I didn't even have to consider adding water, because the gravy at the bottom of the can was more than enough to make the food perfectly moist and mushy and pungent. So, there was another plus. But, I still needed to see if my furbabies would eat it.

My biggest food beggar is Thimble. This can be a bit ironic, though, because she's also the most likely to, as I said earlier, simply sniff the goods and walk away. Naturally, she was at my feet the entire time I prepared the food, and so I let her try it first. 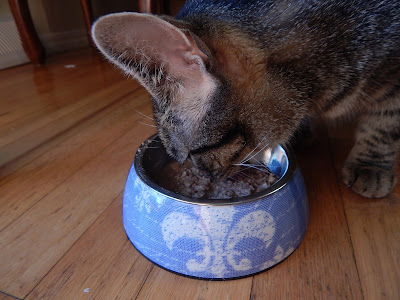 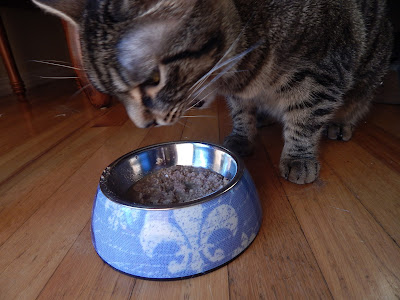 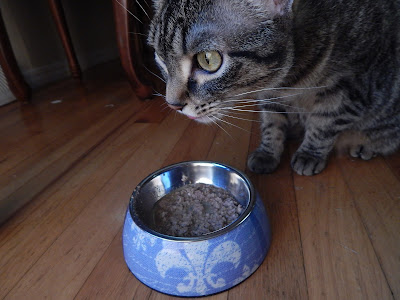 It's even lip-licking good!

After a couple more licks and some additional lip-smacking, Thimble called it quits and walked away. Don't let that fool you, though, because that is completely normal for her. Although she is a beggar, she is far from a gorger. The fact that she took even one lick, let alone a couple more, is a sign that she actually liked the food. It usually means that she'll come back to her bowl later and have some more, which she did (after I put my camera away, of course).

What about the other kitties? Well, we've already established that Eddy isn't a valid option in food reviews. If it's not her favorite dry food, or a bug, it's not even on her radar. And as for Evan and housemate Toby, well, at the time I first offered the Nature's Variety® Instinct® food and had my camera out, they were too busy chasing each other up and down the hallway to listen to my food calls. However, as I've become accustomed to doing with my furry food snobs, I left the bowls on the floor for a while to see if anymore kitties would pass by and notice. And they did. Evan rolled through not long after and had himself a taste of it, and then some more tastes. Housemate Toby tried it out as well, and had himself a nice little snack of it.

What's more, I've given them a couple more cans of it since then, and each time they keep eating it! And so, it would seem that my furry little food snobs give Nature's Variety® Instinct® chicken formula moist food four paws up. And that makes this momma very happy.

For the record, the stray cat (potentially feral cat, as he seems to have no interest in being touched by a human) that likes to hang out on my back patio also likes the Nature's Variety® Instinct® chicken formula moist food. In fact, he loves it and can scarf down a bowl of it in the blink of an eye.


Disclaimer: As members of the Chewy.com Blogger Outreach Program, we received Nature's Variety® Instinct® chicken formula moist food as compensation in exchange for an honest review. All opinions are our own. We only review products that we believe will be of interest to our readers, and we never recommend a product that we do not believe in.


***
Our Tip of the Day:
This seems like a good post to revisit a previous tip regarding water intake in cats...Always keep in mind that cats are, by nature, strict carnivores. Since animal meat consists heavily of water, yet our domesticated kitties aren't necessarily going out to catch their meals, it is often up to us humans to make sure that our felines have access to and are consuming sufficient water. Having plenty of fresh water available as well as feeding moist food are two primary ways to help ensure that your kitty is taking in enough water. With a diet low in moisture content, a cat can be at heightened risk for any number of urinary tract disorders, among other potential health concerns. So, always put out plenty of fresh water for your kitty, consider feeding moist food if you are not already doing so, and of course consult your veterinarian with any concerns.
Posted by The Menagerie Mom at 12:03 AM

We are fans of the Nature's Variety Instinct...but not all the flavors. Chicken seems to be our favorite. Great review!

So glad to hear someone else has the same problem as I do.I might have to try this Nature's Variety Instinct. Most of mine do go for the dry food but I would much rather they eat the moist food. Great review. Thanks.

Great review! You have a picky bunch so it must be a good food if they liked it. I could never leave food sitting around, Sammy and Joanie make sure they eat anything they can see. Great tip about water, it is so important for cats to help prevent kidney disease and blockages.

Great review! The kitties here always have s canned food breakfast, but like yours, sometimes snub it but only after first eating some. They waste food every day, which drives me crazy. Still, like you said, it's good for them to get that moisture.

We used to eat Instinct, but when they changed their formulation we stopped eating it. Merlin will eat anything. Dragonheart is quite fussy. Devi will only eat pâté, but she doesn't care what kind.

Glad your food snobs liked it! :-)

That's wonderful that so many of your babies are enjoying it! Until Mudpie I've never had a cat show such little interest in wet food...it absolutely drives me crazy. Like you, I offer it everyday anyways. I figure any bit she laps up is a plus. I think she and Eddy would be great pals!

Glad they liked it and hope they like the Creamy Bisques too. Heh heh! I love my Chewy food until the review goes live. Then I won't touch it anymore.