The A to Z Challenge has now brought us to the letter I. This was a tough one, I won't lie, and I had to really think on what animal to add to our A to Z Menagerie. To be honest, I was going to doodle out an iguana, but in the end, I just wasn't feeling it. No offense to the little guys, but I don't think reptiles are my forte. That being said, can anyone guess what this is? 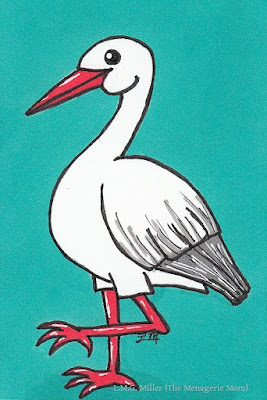 Did you take a guess? It's an ibis! There's no use denying that I wasn't even sure what an ibis was until I was perusing a list of animals that begin with I, stumbled upon the word ibis, searched it, and found a picture of a bird. It looked slightly more promising than an iguana, so I went for it. So, there's that.

Now, today being Tuesday, we also have some toesies to show off. These toesies belong to our housemate Toby. 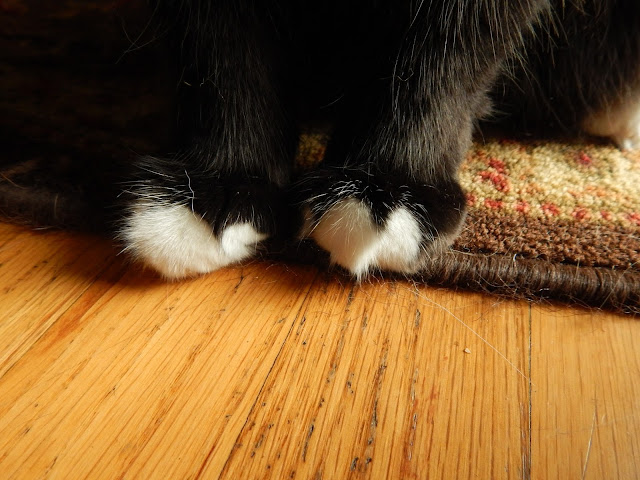 Don't you just love how his little white toes are shaped like little hearts? 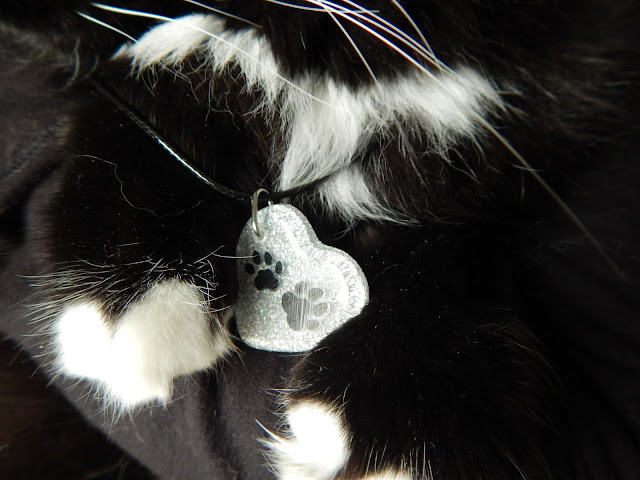 Toby wants to know if any of our furiends have any shapes to share? Any other heart toesies out there? Maybe some fur patched into fun shapes?

We hope everybuddy has a beautiful day!


***
Our Tip of the Day:
We have given a similar tip at least once or twice in the past, but we're going to repeat ourselves again today. Before considering declawing your cat, please do your research on this controversial surgery. When a cat is declawed, it is not just the claw itself that is removed, but part of the digit itself. In fact, did you know that declawing is more or less equivalent to a human having their finger cut back to the first knuckle? This will affect how the kitty ambulates, as they will have to learn to walk on truncated toes. For this reason, many declawed cats end up with early onset and/or severe arthritis. Some declawed cats have also been found to have an aversion to using litter, which could perhaps be due to pain or other uncomfortable sensations due to the removal of the tip of their toes. Before moving forward with declawing a kitty, please do consider that cats are affected in these ways, among others. Please try to find alternatives to declawing, such as learning to trim your cat's claws at home, or taking them in to the vet or to a groomer to have this done regularly. Another easy solution is to provide plenty of scratching posts or other similar items throughout the house, and directing any unwanted scratching behaviors to these allowed areas. There are even claw caps available on the market, which can be placed over the cat's claws and which stay in place for a couple to a few weeks. Declawing is a controversial topic for a reason, so please do all that you can to avoid putting your kitty through the loss of part of their toes.
Posted by The Menagerie Mom at 3:52 AM

Oh Toby, those are sure some great hearts on your paws. And the ibis is too cute. We had lots of those when I lived in Charleston, S.C. You all have a super day.

We've never heard of an ibis before. It's a really big bird! Toby has adorable toesies.

Cute drawing and I learned something new because I had never heard of an Ibis before. Toby has adorable paws, such a cutie. Excellent tip, I am completely against declawing. I don't care if my cats ruin my furniture and rugs, they are all that matters, anything else can be replaced.

When I saw that today was "i" and I saw the drawing of the bird, my first thought was 'ibis' too. I couldn't tell you what it looks like or any of the details, but I know it exists. Don't tell Bear though ... he might get the idea for tasty whole Ibises!
ps - Toby, those white paws are something else. I'm a total sucker for white paws :)

My momma knew what it wuz right away - she's seen em! And your drawing is a good representation.

Those are lovely paws, Toby ! Purrs

Your heart toesies are to die for!!! And I have never even heard of an ibis!

Your drawings are so adorable and well done. Colourful & fun!

And Toby, we love your heart toes.

Like cats, ibises were sacred to the ancient Egyptians. They represented Thoth, the God of Wisdom.

Little Binky, of "Angels Whisper" has an interesting silhouette pattern on her back that looks like another kitty !

Ibis is one of TW's fave birds. She's loves them more cos they're always an answer on her crossword puzzle.