Wednesday with the New Kids

We told you all that we'd soon be sharing more pictures of the new kids. In case you missed anything and have no idea what I'm talking about, I have added a cute little calico to my crew, and her name is Tonks. My sister adopted her black lady cat sister, Winky, and since my sister lives me us, so does Winky.

Before I go on, let me just be honest. These kittens are, somehow, even worse than Eddy when it comes to photo shoots. They aren't great at this thing called sitting still. Photos of them are most often frighteningly out of focus. I've decided they may be the kind of cats best captured in video, so I'll work on that.

That all being said, we did sort of manage a couple of photos of the newbies to share with you all. How did I finally snap these photos of the kittens? By having my sister wrestle them and hold them up off the ground until I could get even a half decent shot of each of them.

So, are you ready to see a couple shots of the newbies? Here they are. 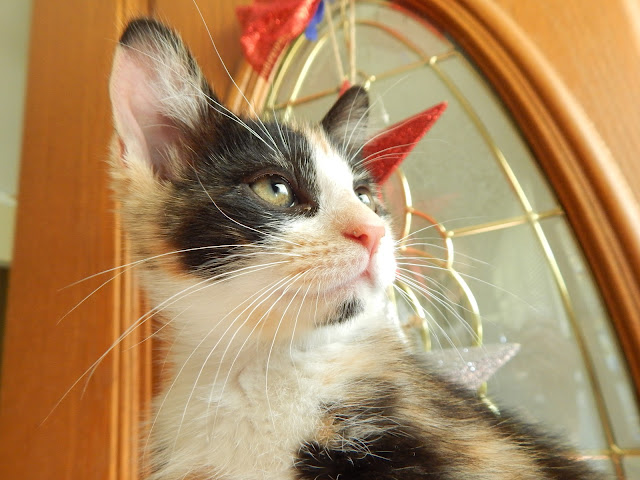 That up there is the calico cutie known as Tonks. She is the most likely of the two new kitten sisters to sit still. She's also the most likely to eat all of the food in the house. Tonks the 3-lb kitten shoved Astrid the 70-lb dog off of her food the other day, and ate it right in front of her. 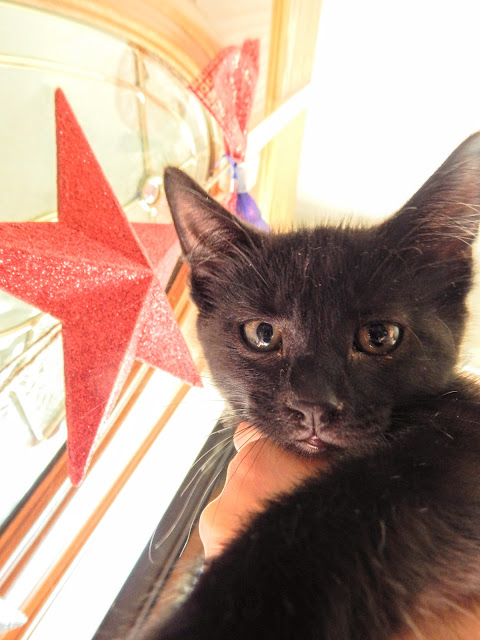 And that up there is Winky. Friends, I don't how many pictures of Winky I'll succeed at sharing. Not only am I pretty much the worst photographer of black cats to have ever walked this earth, but this little black lady cat thinks sitting still is the leading cause of death in kittens. You have no idea how long it took my sister and me to get even this underwhelming shot of her. Winky was not impressed, as you can probably tell.

Now, how about a little update on the integration of these young lady cats into the family? Let's start with what the boys think of them. After a few days of getting used to their insanely high energy levels, Evan now finally enjoys running and playing with the kittens. He's always seemed to enjoy playing with other cats, so I didn't think he'd be a problem. What's more, he is also very good at sternly yet harmlessly telling them when they're getting too rowdy and rambunctious.

As for Toby, he took to the kittens surprisingly quickly. His favorite thing these days is to just sit back and watch them play. I will also add that I think Toby is actually the best furbaby in the house at teaching Tonks and Winky when enough is enough, as he gives very gentle boops anytime they get out of line. Of all of their elders, the kittens heed Toby the best.

Now, what about Thimble? To be honest, she is still not too sure about the whole thing. She does not hide from the kittens, and she often even willingly visits with them (when the kittens are out running and playing, we put up baby gates, and the big kids get to choose whether or not they wish to join the kittens). The problem with Thimble is that she is not really assertive enough, and the kittens literally walk all over her. She does not like that, and I don't really blame her, because they are relentless about it. For some reason, the kittens just don't listen to Thimble when she tells them to back off. She has tried hissing, growling, and whining at them, but, perhaps because she is a small cat who looks a bit like a kitten, they seem to think she is a a playmate or even a plaything. I often have to redirect the kittens in order to give Thimble a much-needed break from them.

And then there's Eddy. Eddy has not had direct access to the kittens yet. Change and unfamiliar things really throw Eddy off and prompt her to go into hiding. She is a very timid, skittish cat, and the new kittens seem to instill a good deal of fear in her. If I'm to be honest, I don't know how she'd react if one of the kittens did to her what they do to Thimble.

The above all being said, Eddy has not even once hissed or growled at the smell or sight of the kittens. She seems to make small yet forward progress with the whole situation every day. She hid for nearly two days straight immediately after the kittens' arrival, but that is not the case anymore. She now watches the kittens from afar, and has even started getting closer and closer to the large cage in which they stay when they cannot be supervised. When the kittens are running amok and playing in the house, I put a baby gate up in my bedroom doorway (my bedroom has always been Eddy's safe haven), so that Eddy can watch the kittens play on the other side of it. Sometimes the kittens even run right up to the baby gate, and while Eddy does not get too close to the gate, she also does not run away. The sight of the kittens no longer immediately makes Eddy hide, but instead seems to finally stir some curiosity in her. I have hope, therefore, that somewhere down the line, she will at least be willing to coexist with the kittens.

Oh, and we can't forget about pup Astrid. The long and short of it is that pup Astrid loves cats. The kittens had never seen a dog before her, and so they were very unsure of her at first. They are far more accepting of her now, though, and that makes Astrid very happy. That being said, Astrid does not get any unsupervised time with the kittens, as they do excite her, and a 3-lb kitten is no match for a friendly yet excited 70-lb dog.

So, we're still very slowly but surely integrating the kittens into the family. Primarily because I need to ease Eddy into this, we may still be working at this for many more weeks. I'm okay with that, though. I can have patience, especially if it means we might eventually have one big, mostly happy family.

Wish us luck! And, we're wishing you all a wonderful Wednesday! 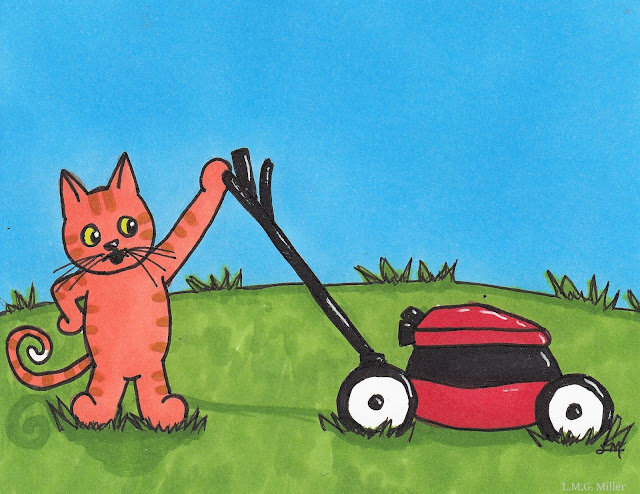 We are working through a series of tips on how to keep strays, ferals, and other outdoor furbabies safe and sound in the summer heat. We began this series of tips yesterday by discussing the importance of offering shaded areas, where outdoor cats or even dogs can stay cool. In this same line of thought, today we want to remind you to put necessities for outdoor furbabies in said shade. Whether you have shaded areas beneath trees or bushes, a table that offers shade, a summer shelter that offers shade, or something else similar, be sure that you place food and water in those shaded areas. This will ensure that animals outdoors can have food and water that is as cool and fresh as possible, and that they can eat and drink out of the sun.

In addition, try to offer somewhere comfortable for strays, ferals, and outdoor furbabies to rest in their shaded area. For example, you can place bedding or even a chair in the shade, so that strays and ferals can get comfortable while also remaining as cool as possible. Then again, keep in mind that many furbabies will not want to sleep on blankets or other potentially insulating material in the heat. So, also take this into consideration, and make sure that shaded shelter truly allows for cool and cozy safety and relaxation. All in all, in the hot summer months, don't just offer shade to strays and ferals, but also food, water, and other necessities in that shade.
Posted by The Menagerie Mom at 12:03 AM

They are so cute!

The new kids are adorable and finding their place in the family just fine - it's the "already heres" who are finding it a little interesting to adjust and that's always the case. Things will settle down and find their "LEVEL"...they always do!

Hugs, Mom and Teddy too

I am so glad to meet you and I am extra glad of all you mentioned here in the blog about outside kitties. Thank you for that and I am happy to meet all the kittens and in-place residents.

Oh those kittens are too cute. Bet that if fun to have them around. Glad Eddy is putting up with them. You all have a super day.

Serious cuteness! Don't worry about the black kitten photographing; you'll figure it out as you keep working at it. And use the selfie on your phone; pick up a kitten, take a photo without you in it, and voila...kitten photo!

Tonks and Winky are adorable!

They are so cute! I am glad they are settling in well.

OMC they are just PRECIOUS!! So adorable! That Tonks is gorgeous! I love that Astrid loves kitties, Dakota does too!

The kits are adorable! We hope the integration continues to go well...and Eddy eventually doesn't mind having them around.

I knew Astrid would love them. They are so cute, especially Tonks, I love calicos. Evan will teach them boundaries in no time. Very cute drawing. And excellent tips. XO

They are SO ridiculously adorable it's not even funny!!!

They are beautiful, and watching a dog let a kitten push him/her over is funny!

They are flat out adorable! We are glad the integration is happening; you're doing it right by taking your time!