It's time to rhyme! That is, it's time for the Thoroughly Poetic Thursday challenge, hosted by the handsome Angel Sammy and Teddy.

Each week, our hosts offer us a photo prompt to get our creative juices flowing. This week's image is this beautiful one here:

This image makes me feel very calm and nostalgic. To be honest, that peaceful place looks to me like somewhere to which someone might retreat after retirement. I don't know really know why, but that's simply the thought that came to my mind. I know that I wouldn't mind hanging out somewhere like that once I retire.

Anyway, my poem this week is very loosely based on my great-grandparents. That being said, I'll be the first to admit that this is certainly not one of my most riveting poems. It's also, surprisingly, one of my shortest. So, for another random rhyme by me, feel free to read on!

Everything was golden
For Jim and Audrey Holden.
They had lived decades numbering nine,
And their years had been more than fine.

They sat that day upon their porch,
Their rockers swaying back and forth.
Upon their laps snoozed their two feline friends,
Who had been with them for years that numbered two times ten.

Jim and Audrey gazed out at their lake,
As they waited for the sun to wake.
It would soon rise golden in the sky,
Allowing another day in their golden years to pass by.

Everything was indeed golden
For Jim and Audrey Holden.
Golden even were their memories,
And their adventures could fill treasuries.

Jim looked to Audrey and asked,
"Remember when we traveled the Nile all those years past?"
How could Audrey have forgotten?
She would take that memory with her to her coffin.

Reminiscing then began,
About that journey to that golden land.
They had sailed the Nile for miles and miles,
Their journey bringing them many smiles.

When they sailed ashore to that golden sand,
Jim and Audrey were both perfectly tanned.
But that was not an important detail,
And against all else it really paled.

The golden sand they traveled for hours,
Until they saw pyramids ahead like towers.
The pyramids stood tall and golden,
And brought much excitement to Jim and Audrey Holden.

They toured the pyramids for a very long time,
And lost count of how many they did climb.
But their journey did not end there,
For then they visited a creature quit rare.

You see, next up was the majestic Sphinx,
Which looked nothing like their cats, Tiger and Lynx.
Jim and Audrey were nevertheless in awe,
Of this creature with its stern face and giant paws.

After their time with that golden creature,
Jim and Audrey proceeded to the next feature.
They returned to the Nile and saw a great many things,
Until they finally stopped at the Valley of the Kings.

It was Tutankhamen's tomb they sought,
And disappointed they were not.
The king of old slept in his golden coffin,
Visitors in awe of it really quite often.

The journey to the land with golden sand,
It was but one of Jim and Audrey's adventures grand.
Though they treasured the adventures on which they roamed,
There was nothing like the comfort of home.

And so Jim and Audrey sat upon their porch,
Their rockers swaying back and forth.
Beside them, as always, were their two faithful cats,
Who, like Jim and Audrey, were full of class.

These four companions gazed out at the lake,
For here there were still golden memories to make.
They watched the sun rise golden in the sky,
Casting gold onto the water beneath which did lie.

You see, everything was golden
For Jim and Audrey Holden.
Their youth had been like golden treasure,
Filled with joy beyond any bit of measure.
And golden were their memories,
That they treasured with the greatest of reverie.
And now, golden were their years,
Which they held incredibly dear. 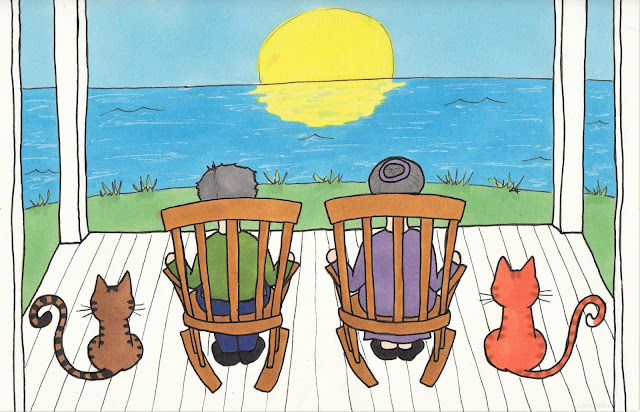 My great-grandparents' names were, indeed, Jim and Audrey. Their last name was Robinson, though, not Holden. But, Robinson didn't rhyme with golden quite to my liking, so I took some liberties and changed it up. They also never traveled to Egypt, but that's just another liberty I took.


Thimble said that's enough with all that other business. It's time for her to shine. 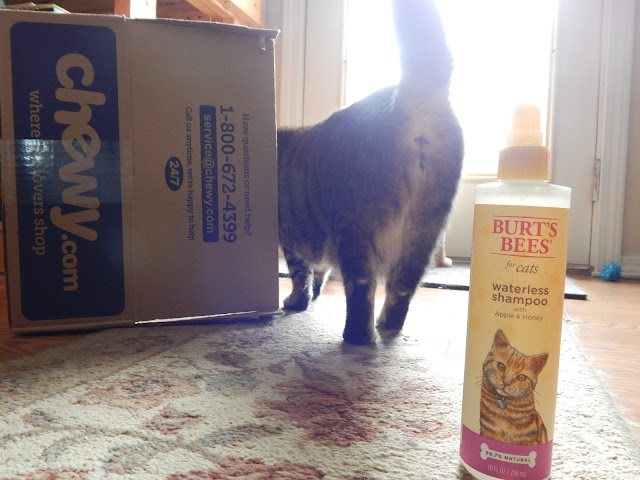 What are we looking at here? 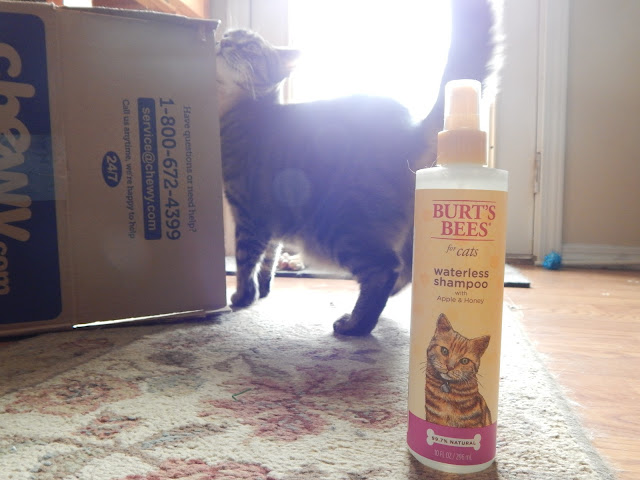 Oh, yes, these bright and shiny shots star Thimble's tushie. These are actually some throwback shots to our review of Burt's Bees waterless cat shampoo (to read our review, just click here). Since Evan is hind limb paralyzed and therefore his aim in the toilet is at times not all that on point, he got to be the main reviewer of the shampoo. Thimble did not like that, though, so she sidled her way into to some of the shots. A model's gotta do what a model's gotta do.

Speaking of models, Thimble decided that she wanted to portray how thankful she is for her modeling skills as part of Brian's Thankful Thursday Blog Hop.

In all seriousness, though, we have so much for which to be grateful. We are thankful for our health and happiness, and for our home and each other. As always, we are of course also so incredibly grateful for all of you friends of ours. Blogging and making friends here is something that makes us happy every single day.

Last but not least, below are the fill-ins for tomorrow's Friendly Fill-Ins challenge. The first two fill-ins come from the mind of my co-host, Ellen of 15andeowing. I came up with the second two.

Is your kitty or pup a fast eater? If your furbaby inhales their food, there are some potential ways you can help slow down their eating. One way is by placing something such as a golf ball or tennis ball, or another safe item, in the bowl. This can slow down eating since they have to eat around the item. Of course, do make sure that any item used is not a choking hazard, and also that it doesn't take up such a large portion of the bowl that it would restrict the ability to eat altogether. There are also bowls on the market that have partitions that serve the same purpose, to slow down a dog or cat's eating. In this same vein of thought, sometimes all it takes is using a plate rather than a bowl, as having the food more spread out can also slow eating. Using methods to slow down eating can help reduce problems that often result from rapid eating, such as regurgitating food and weight gain from overeating.
Posted by The Menagerie Mom at 12:04 AM

Pawsome poem!
And Thimble, you're CRACKIN' us up!

Great poem telling the story of your great grand parents. They sound like they were wonderful people. Have a fabulous day.

Your poem was absolutely wonderful and so are your photos beautiful Thimble! Thanks for joining the Thankful Thursday Blog Hop!

Oh this one really made us smile BIG......love the accompanying doodle too but the poem is the "flavor" of what came to mind when we chose that photo for Angel Sammy's challenge this week. It spoke to us of quiet moments, memories, love of nature, time passing....all the things that are "comfy"....I'm retired and I can assure you that it feels just like this photo (at least for us!). At one with our world and the time to enjoy it.

Hugs and thanks again for your wonderful poem-stories. They are a highlight on Thursdays.

We'd like to be sitting on that porch (or deck or whatever it is) and relaxing too. What a great poem, once again.

Even if it was fiction, i will bet your great-grandparents had a mostly happy life.

That porch looks divine. Our mom would love to live there. That's such a wonderful poem to celebrate the lives of your great grandparents.

Delightful poem, and nice photo of Thimbles...er, um...starfish! LOL! Manny eats slowly, CB gobbles so fast! Either The Hubby or I have to stand guard, to make sure Manny eats all of his, and that CB doesn't raid Manny's bowl. I'll mention to The Hubby that maybe a plate would slow CB down, thanks for that!

I love your poem and the art you created to accompany it! What a cozy, peaceful little setting. I would retire there happily!

We love the picture, to us it is a respite from a busy day and the sound of birds.

We love Thimbles pictures, She does make me smile!

How blessed you were to know your great- grandparents. I enjoyed your poem and the drawing with it. Thimble has a cute little bottom. Excellent tips too, I use a golf ball in Joanie's food, it works for her, but Sammy just knocks it out :) Looking forward to the fill-ins tomorrow.

TW wishes I was a faster eater. She doesn't really want to keep my food out for a couple of hours but I still don't finish it in that time. Your doodle will be TW and Pop in a few years. Mark my word. TW loves Burt Bee's products.