Welcome to another Thursday, friends! If you visit us regularly, you probably know where this post is going. As always, we're starting with a bit of rhyming.

Every Thursday, we enjoy participating in Angel Sammy and Teddy's Thoroughly Poetic Thursday challenge. And, every Thursday, our hosts offer us a photo prompt to guide us on our poetic endeavors. The image for this week is this intriguing one here:

This is probably one of the images that I struggled with the most. Sometimes, when I see a photo prompt, my mind goes wild and gets multiple ideas at once. When I saw this one, though, it drew a blank. I did recognize that squirrel, as, if I'm right, I believe it's meant to be the squirrel from the animated Ice Age movies. Even after I made that realization, though, I still struggled to think up any semblance of a story to go with it. Ultimately, after quite some time, a vague idea inspired by none other than a fairy tale popped into my head, and so I ran with it.

The Squirrel and the Girl

Huey was a prince like any other prince.
He thought his name and gold could get him out of any pinch.
That's why he thought he could taunt that little old witch,
Who lived down the road from his castle in Ipswich.

Her name was Margaret, that witch down the street,
And tending her garden was her own little treat.
That's perhaps why she battled squirrels so fiercely.
Losing plants to those rodents made her stomp, fume, and scream.

It was not just bushy-tailed rodents the witch did combat,
But also young hooligans whom she oft told to scat.
The witch's house was old and small,
The witch herself a tad bit crabby, and not very tall.
Perhaps that made her seem like an easy target,
Perhaps that's why the hooligans picked on old Margaret.

Huey the prince was indeed one such hooligan,
Even though he had already surpassed the age of ten.
It was one dark and stormy night,
When Huey tiptoed to the witch's house, staying out of sight.

Other hooligans had already pulled pranks of all kinds,
And Huey wanted to trick the witch with something fresh from his mind.
Much to Huey's delight,
He had an idea he thought quite bright.

Huey yanked from the garden this plant and that one.
He did not know the names of any of the plants, no, none.
Long before Huey considered himself done,
He was interrupted by a certain someone.

"Get out of my garden, you lout!"
That was what the approaching witch did shout.
The old woman named Margaret was clearly angry at best.
Huey should probably get out of there, he guessed.

But first the witch did shout,
Her voice quite a grating sound,
"If you're going to act like a sneaky squirrel,
Then, here, let's give this a whirl!"
Margaret the witch pulled out a wand and waved it around,
And suddenly Huey was very close to the ground.

When he looked down to see his hands,
Huey saw that it was on furry feet that he did stand.
Good grief, the witch turned him into a squirrel!
Huey thought he might up and hurl.

The witch laughed and threw back her head,
And when she finally stopped, she said,
"You will forever be this filthy squirrel,
Unless you somehow make friends with even a single boy or girl.
Good luck, because no one likes a rotten squirrel."
Then the witch disappeared in a swirl.

Huey, now a squirrel, at first panicked a bit.
What was he going to do with a situation like this?
Finally, he scurried his way back to his castle,
Where the guards treated him like he was a hassle.
They even rudely chased him off with a paddle.

Next, Huey tried a visit with his royal friends,
But even they only laughed, shooed him, and away he was sent.
It would seem that, now a squirrel,
Huey was a respected prince no more.

That prompted Huey to travel back to the witch's little home.
After all, he was welcome nowhere else he roamed.
Huey hoped he could beg and plead for his freedom,
But the witch would not even open her door to see him.

Huey hung his furry head and moseyed about,
And then heard, "Is this what it looks like when a squirrel pouts?"
The words had been spoken by a little girl,
Who lived by the witch, just next door.
Like the witch's little shack,
The girl's home was small and a bit out of whack.

To Huey the squirrel, the girl continued to speak.
"Are you sad, or is it food that you seek?
If you like them, you can have some of my leeks."
From the bowl in her hands the girl withdrew a serving,
And Huey realized that, in his stomach, hunger was indeed lurking.

That day, the girl shared with Huey every one of her meals,
Which included turnips, asparagus, and even some eel.
The girl even offered Huey a place to sleep,
In a tiny little barn where his roommates were sheep.

For more mornings and nights than Huey could remember,
From October and all the way to December,
The little girl offered Huey kindness, food, and shelter.
That really was all quite swell,
But Huey had to admit he had much more to say to the girl,
If only squirrels had far more functioning vocal cords.

It was on one bright and shiny morn,
When the girl came out eating a bowl full of corn.
She had a separate bowl out of which Huey could eat,
And he found the meal perfectly savory and sweet.

The girl then drew out a book and opened it up,
At the same time offering Huey a sip of milk from a cup.
She headed over to her old swing that hung from an equally old tree,
And hopped up in order to take a seat.

As always, she asked Huey the squirrel to join her as she read.
"A good story is best enjoyed with one's very best friend."
Those were the very words that the girl did say,
And just like that, the witch's curse went away.
Thanks to the girl next door making him her friend,
Huey's days as a squirrel had come to an end.

Huey, believe it or not, had indeed learned his lesson.
The prince no longer spent his days wreaking havoc or causing tension.
He was a changed person by then,
And with the witch he even made amends. 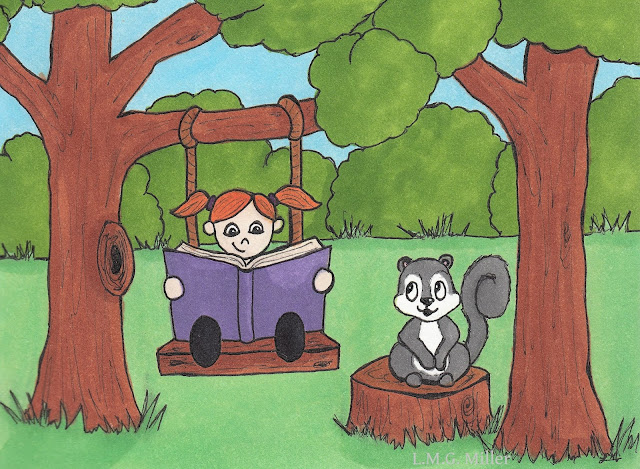 
Some of you can probably guess what's coming up next, because it's the same as what you see next on every Thursday. It's Thimble! 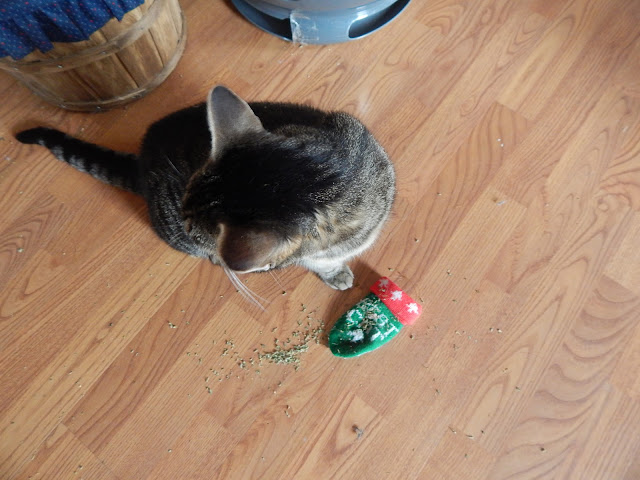 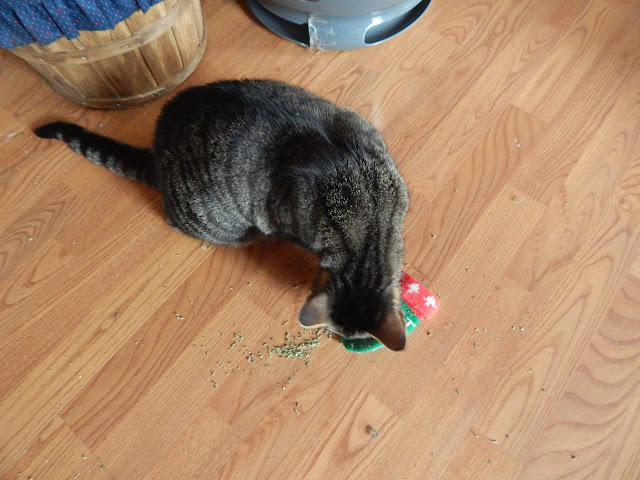 Unfortunately, though, sometimes other kitties smell the goods and show up for the party. 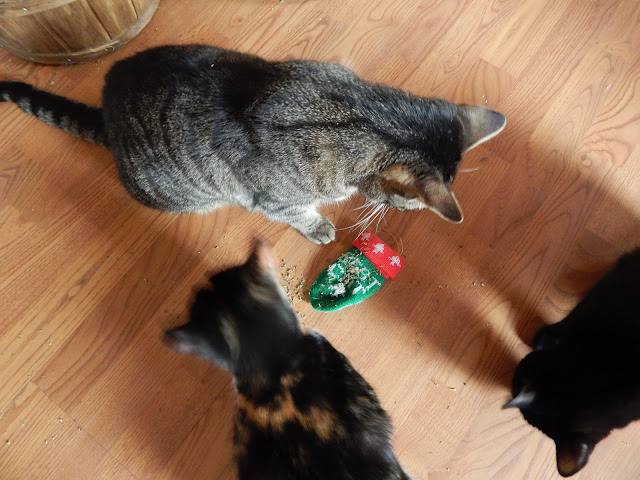 Just look at those kittens, edging in on Thimble's loot. Don't worry, though, because there's plenty more paraphernalia where that came from. Thimble got plenty of nip refills, to make up for what those blurry kittens stole from her stash.

While Thimble is thankful for her toys and nip, all of us here are also grateful for so many other wonderful blessings in our life. We are especially thankful for all of the wonderful human and furry friends we have in all of you.

Last but not least, we are here to share the fill-in statements for tomorrow's Friendly Fill-Ins challenge. Ellen of 15andmeowing came up with the first two, and I came up with the second two.

Today's tip on caring for ferals and other outdoor cats is to perhaps consider offering them toys, such as inside a shelter you've set up for them. Cats are cats, and even feral cats often have a healthy instinct to play. Pick toys that will not scare them, and toys that will not make them fear being heard by predators. For example, perhaps avoid toys that jingle, squeak, or that make other loud noises. What's more, when picking out toys for them, also pick those that can be easily cleaned. Pick toys that are plastic and can be soaked and washed if dirty, or toys made of fabric that is able to be easily and thoroughly washed. Even ferals and other outdoor cats often have a desire to play, so perhaps do consider offering them toys that safely allow them to do so.
Posted by The Menagerie Mom at 5:35 AM

HA! When I saw that photo I knew you'd have a terrific poem. We're thankful for catnip and toys too sweet Thimble. Thanks for joining the Thankful Thursday Blog Hop!

Did you know that President and Mrs. Reagan were crazy about squirrels? They are fascinating creatures. Sweetie has played with toys before, but The PO'M seems scared by them. He plays with twigs and leaves, so maybe I just have to approach it in a different way. Great poem!

The feral cats that I have here love to play with toys. They especially like the wand toys.Thimble, sure looks like you are having such a good time.

Great poem, interesting pic. Have fun with the nip and toys sweet ones!

Thimble, catnip is something the kitties here love too. It's good you have lots!

That was a great poem. That picture sure was interesting!

Thimble, you look like you're dealing nip to those innocent little kittens! MOL

That was fantastic! You always amaze me with your poems. Cute drawing too. And Thimble is always adorable. We have a lot of nip heads in this house too. Excellent tips too. XO

We have catnip fiends here, too, and the trick is to always have plenty.

Oh I love your poem-story and it has a GREAT lesson in the lines as well.....showing friendship brings rewards - just ask a Prince!!!

Thanks for playing with us every week for poetry challenge - Angel Sammy appreciates your effort and you just "knock it out of the park" every single week.