I recently heard someone refer to Friday as Friyay. I guess that sounds fun, but I'm also not so sure. Either way, Friday means it's time for the Friendly Fill-Ins challenge. In case you missed the fill-in statements yesterday, I'll share them again here. Ellen of 15andmeowing came up with the first two, and I came up with the second two.


I took a turn to fill these in myself, and here's how I did. My answers are in bold.


1. I could live on furbabies and fruit.
(No, I wouldn't eat the furbabies for sustenance. That's not my style. If my furbabies' love and cuddles alone could keep me alive, that would be enough for me. If I had to pick food to keep me alive, though, I'd probably ultimately choose fruit. Boring, huh? Honestly, though, I love fruit. I have been known to eat many cups of berries and something like four bananas in a single day.)

2. I rarely go out at night, but when I do, I'm probably going to the movie theater.
(I'm a diehard homebody and hardly ever leave home at night. If I go to a movie, though, it's usually at night. Last Friday night, I went to watch Captain Marvel with my family. Captain Marvel has an orange tabby cat character named Goose. Can you guess who my favorite Captain Marvel character is? Can you? It's Goose. My favorite character is Goose. His name is Reggie in real life, and I'm a fan.)

3. I would most like to be known for being compassionate.
(I'd rather be known for offering a kind, caring hand to needy animals and humans than anything else. I'm not saying I'm perfect at this, because I am always a work in progress. But, I hope I can succeed at this in some way.)

4. If you want something done your way, you have to do it yourself.
(I don't know why this is the answer that immediately came to my mind. Perhaps it's because one of my biggest pet peeves is when someone tries to pawn a task off on someone else, and then criticizes the way they do it. I guess there are cases when this is incorrect, such as in job settings where bosses exist. But, even so, I'm still of roughly the same mindset.)


Eddy isn't thrilled that I often grab shots of her from angles that are not known to be flattering. I happen to think she is always flattering, though. 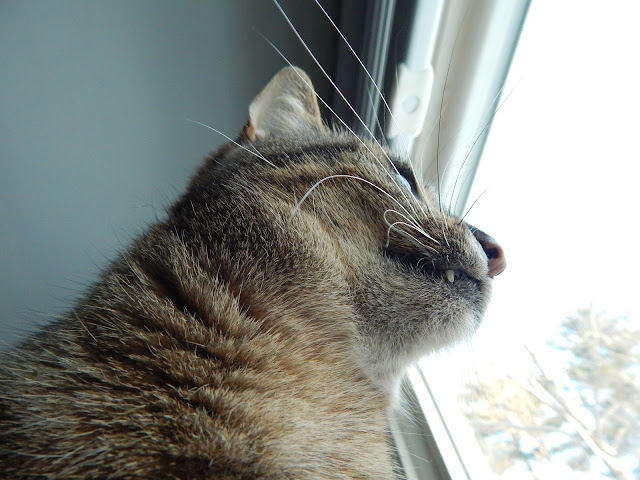 And look! You can see that snaggletooth I love so much!

Eddy and all of us here wish you a fantastic Friday!

Our Doodle of the Day: 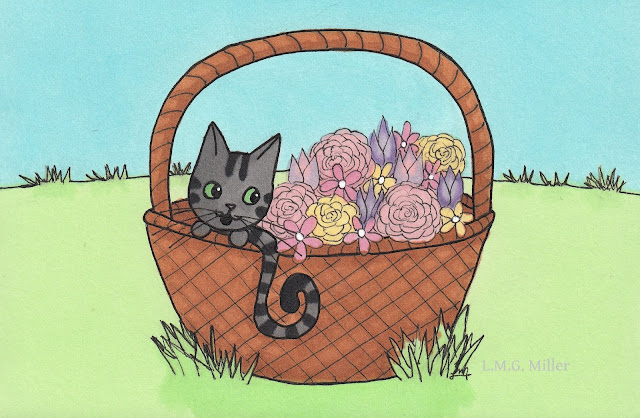 Our tips for National Pet Poison Awareness Month continue on, and we have yet another random household item to be aware of due to the potentially toxic effects that can result if ingested. What we're talking about today are coins. Coins, such as pennies, contain zinc, which can lead to toxicity and serious side effects if ingested in large enough quantities. Zinc poisoning can result in vomiting as well as increased respiration rate and heart rate. Zinc can also damage blood cells. For these reasons, as well as for the choking and obstruction hazards that coins can pose, be sure to always keep coins out of your kitty or pup's reach. Some animals will put anything and everything into their mouth, which could of course lead to danger with items such as coins. So, keep those coins safely tucked away!
Posted by The Menagerie Mom at 4:21 AM

Friday just means two days at home with the kitties. That's a Fri-YAY!

I always look forward to Fridays so I can see your Thursday poetry creation and again you turned the photo inspiration into a magical story. I could absolutely see myself in that story - only substitute the name "Teddy" for "Beau" !! Thanks for participating with us every week. Also thanks for co-hosting fill-ins. Always a pleasure to see your responses as they resonate with me!

Cute doodle; I added a photo of Angel with flowers 'round her head to my FB page...it's beginning to feel like SPRING! The Hubby is good as pawning off chores on me, then firing 'you shouldas' at me! This is why I have an accountant doing our taxes; the price is cheaper than the stress!

I know you wouldn't eat your kitties, but loving and cuddling is another thing altogether. We rarely go out at night anymore either. If we do it's probably to dinner with family or friends. We'd rather do lunch and be home when it gets dark.

Thank you for co-hosting Friendly Fill-ins. We appreciate it very much.

Darling Eddy - I love that tooth too! Good to know about coins - thanks!

Happy Friday. We love the friendly fill-in answers that you shared. I love being a homebody too. Now I have to go to Captain Marvel to see Goose, the best superhero out there. Always great to see Eddy from any angle. Love that snaggletooth of his. Thanks for sharing. Have a wonderful weekend.
World of Animals

Great answers to the fill-ins. I am impressed you eat such healthy foods. That is cool that there is a cat in the movie, that would be my favorite too. We never go out at night either unless we have to. I agree about people that complain when they should have done it themselves to begin with. I also agree Eddy is cute from any angle. This is a great shot. Excellent tips too-Penny may borrow this one for her tips column. Cute drawing too. Have a wonderful weekend! XO

Me again. I also meant to write that you are very compassionate and all your readers know this. :)

Yo! Great answers and thanks for cohosting. TW loves summer fruit but not winter fruit. Pop eats 2 bananas a day cos he needs the potassium. TW misses going out at night but can't figure out how she used to do it—running to catch a bus at 10 pm alone through the deserted streets. No more.

Great answers! I might just have to go see Captain Marvel myself. Or wait until I can watch it at home with Mudpie :)

As i tell all of my clients, the way you want your house cleaned is the right way, so tell me how you want me to do it.

That snaggle tooth is precious.