Some of you might remember that, about 2 weeks ago, Evan was diagnosed with a urinary tract infection (UTI). He was given 2 weeks of antibiotics, and for most of those 2 weeks Evan acted like his UTI was all cleared up. This past Friday was the last day of his antibiotics. That very night, and every day after, my poor boy Evan's UTI symptoms came back with a vengeance. 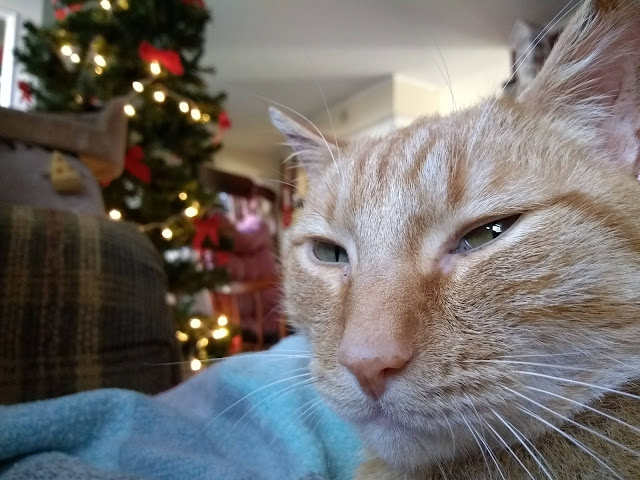 The first time around, 2 weeks ago, Evan's primary symptoms were a significant increase in his already existing urinary incontinence, as well as a case of urine scald around his genitalia due to his incessant urine leakage. Our wonderful vet shaved the hair away from the area 2 weeks ago, which allowed the urine scald to heal, and it has luckily remained healed. What did recur just this past weekend, though, was the increased urinary incontinence. This time around, on top of the incontinence, Evan also started having accidents around the house even when awake. He would urinate up to 6 times in an hour, often wherever he was sitting. He never strained and never passed only small amounts. It would hit him suddenly, and then lots of urine would be sitting behind him. I could tell that, during those bouts of urination, Evan was agitated and perhaps a bit embarrassed. I'm used to doing lots of laundry and cleaning because of Evan's urinary incontinence, but I don't usually have to do the 10 loads of blankets or clean the floors 5 times like I did on just this past Saturday alone. It was a very eventful day.

So, Evan went back to the vet yesterday. Our vet had already told us that if Evan's symptoms returned, they'd need to collect a sterile urine sample and do a culture of it to determine the bacteria's identity and resistance to certain antibiotics. The only reason they didn't collect a sterile sample last time was that we went in on a Saturday for a last-minute appointment. Our vet is only open until noon on Saturdays, and Evan's nervous bladder caused him to release all of his urine before allowing a sterile sample to be collected straight from the bladder. In other words, the vet had to work with whatever Evan peed during his appointment last time. So, this time, I dropped Evan off in the morning. In between bouts of his nervous and infected bladder releasing large amounts of its urine, our vet was nonetheless able to collect a sterile urine sample straight from his bladder.

Anyway. Like I said, our vet is amazing and he got what he needed from Evan yesterday. Given that Evan actually did respond well to the antibiotic the first time, the vet is thinking that Evan might simply need to be on it for longer. So, he was given more antibiotics, and he may even need a third round, though we are still having the urine cultured and the bacteria identified just to be certain.

Evan is doing much better already, especially now that he's back on antibiotics. When Evan was at the vet 2 weeks ago, he had his senior bloodwork done. All of his results came back normal. His kidneys are functioning well. He does not have diabetes. He does not have anything that would indicate his urinary issues have a serious underlying cause. Evan's primary considerations are his already existing hind limb paralysis and urinary incontinence, which are both factors that can increase an animal's chance of getting a UTI. In the grand scheme of things, I'll take a UTI in one of my furbabies. I know many of you are dealing with health issues much worse than this, so I am grateful that the burden we are personally bearing is as little as it is. 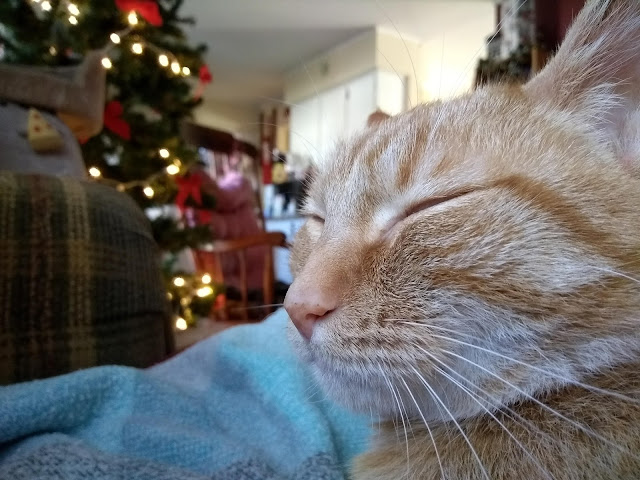 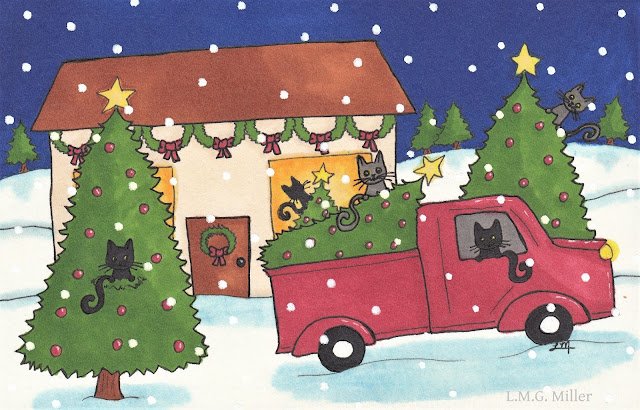 This is another red truck doodle from last year. I'll be doing at least one new red truck doodle next week. We'll finally be sharing the last couple of doodles in our Dickensian series at the end of this week. They just need polished off, which was supposed to happen this weekend. But, as I mentioned above, I spent most of my weekend doing laundry and cleaning up after my sweet, sick boy Evan. That's okay, though. I'm going to try and see if I can finish enough drawings to share all brand new festive drawings from the end of this week all the way through Christmas. That seems like it would be a fun and festive way to celebrate the holiday week.

If you are traveling for the holidays without your furbaby, be sure to plan for their proper care while you are away. Be sure to book a pet-sitter or space in a boarding facility well in advance, to ensure that your kitty or pup has scheduled care with a trusted caregiver. Then, of course, also make sure that your furbaby's caregiver has everything they will need for the comfort and safety of your kitty or pup. Whether a pet-sitter is coming to your home or whether your furbaby is staying at a boarding facility, have plenty of their food in stock, and make sure that their leash, litter, and other necessities are readily available. Also make sure that any medication they take is refilled, and that instructions for medication administration as well as feedings and other care is written down or understood by the caregiver. Other important information to leave for a caregiver is your contact information, your veterinarian's contact information, and your furbaby's medical records, as needed. It is always better to be more prepared than not, so be sure that sufficient preparations are made for your furbaby's care in the event that you leave for the holidays, or any time of the year.

Posted by The Menagerie Mom at 2:55 AM

Hope you can get rid of that UTI dear Evan and be able to enjoy the holiday in comfort! Sending you POTP.

Poor Evan! We hope the UTI clears up soon.

Poor Evan. I am glad he is already improving. I am surprised they can test so soon after antibiotics. I hope they find the cause. I like the drawing.

Purrs and prayers to Evan. We hope he is all better soon.

Poor Evan and Poor you. We send our purrs and prayers this clears up his and your Christmas

We send more purrayers and POTP to Evan and all who are caring for him. And like you we are glad it isn't something worse !

Poor Evan! Nellie had what seemed a constant UTI and was totally embarrassed. When you love them, even loads of laundry don't seem that big a deal. We are sending purrayers that the Antibiotics clear it up.
Purrs
Marv, Jo Jo, Kozmo, Cinnamon and Barb

How scary for both you! Poor baby. Santa had better be extra good to you this year, Evan!

When i had my last bout with tonsillitis right before my tonsils came out (at age 24!), i was on the antibiotics for 6 straight weeks to keep the infection at bay enough to do the surgery. Stay on the meds, and finish them all, they are miracle workers when used as directed, even over a long course.

We of course don't blame our anipals for bodily failures. I think it is amazing they can adjust to live in a house at all!

Fortunately, when I had wood floors installs 30 years ago, I had them apply a 3rd layer of polyurathane and it helped. There were dark stains but over a few years they cleaned up well.

Poor Evan. We are glad to hear he's doing a bit better, and hope the 3rd round of antibiotics work fully!