Tonks is my most consistent, persistent leg warmer. She especially lounges on my legs and keeps them warm when I'm watching television. Lately I've of course been having a good amount of Christmas movie marathons, and Tonks loves that just as much as I do. Tonks kept my legs warm during one entire movie the other day. The TV is on the righthand side of this photo. Can you tell which movie we were watching? 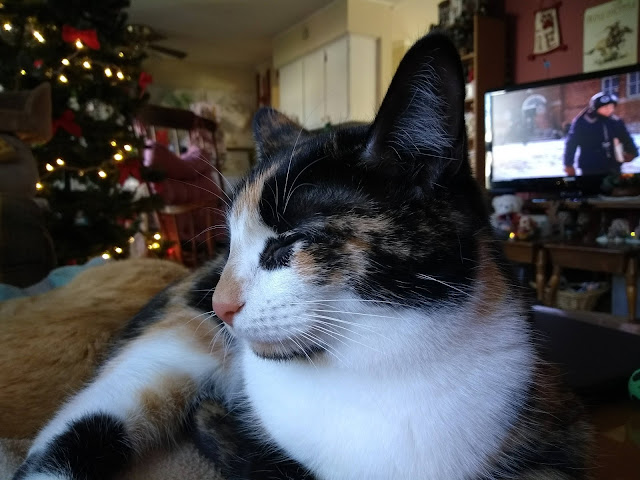 Just last week we shared a doodle related to this movie. 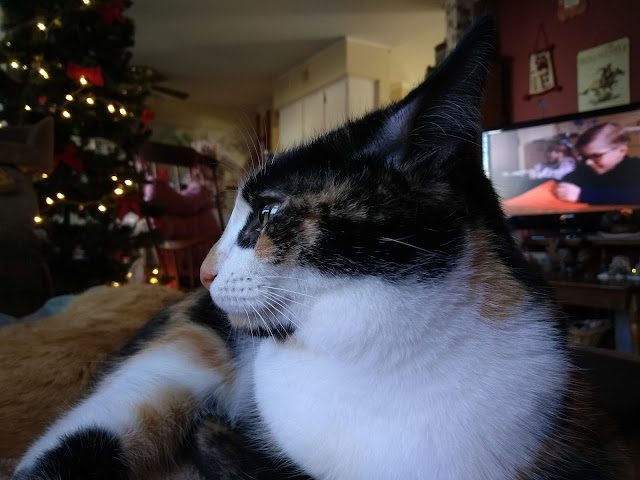 Sometimes Tonks gets a tad bit annoyed of the television. Why does it have to constantly make noise? But, at least when it's making noise that usually means this here human's lap is available.
What do our kitty friends out there think of laps and TV time? Do any of you serve as leg warmers like Tonks does?

***
Flashback Doodle of the Day
I was hesitant to share today's flashback doodle, in no small part because it's a couple years old and is not one that I'm terribly proud of. Though sometimes I do well with overcoming it, I can still often be a perfectionist, and in this doodle I see all sorts of imperfections. But, it also relates to the new series of doodles we'll start sharing tomorrow. So, we're going to go ahead and share this sort of whimsical flashback doodle that was inspired by the Charles Dickens character known as Tiny Tim, who of course co-starred in A Christmas Carol. 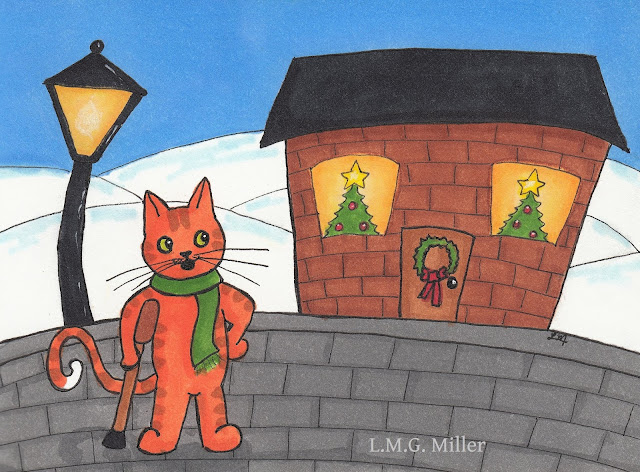 As this flashback doodle may or may not hint at, the new series of doodles starting tomorrow is going to be at least slightly inspired by Dickens' A Christmas Carol, or at least by the era. This time around, though, the doodles will be in my more current drawing style, and they'll hopefully come across as slightly more vintage and classic, at least as much as something in my cartoony drawing style can be.
***

Did you know that poinsettias are not as deadly for your furbaby as is often believed? Of course, that's not to say you should be feeding poinsettias to your furbabies as an afternoon snack, as they can indeed cause irritation of the mouth and stomach. But, poinsettias are in actuality not the most dangerous of Christmas decorations. It's festive plants such as mistletoe and holly of which you should be even more cautious. Mistletoe can cause issues such as vomiting, diarrhea, decreased heart rate, and difficulty breathing. Holly can also cause vomiting and diarrhea, and sometimes lethargy or even death. Needless to say, always be cognizant of what plants and other decorations are in your home. To be safe, it is likely best to simply keep your home free of Christmas plants.

The nice thing about humans watching movies is that you get a nice warm lap to curl up in for a while :)
Mum loves Dickens and likes this picture!
Purrs, Julie

A Catmus Carol of course. Love the doodle and Tonks too

I learned about poinsettias NOT being as deadly as first thought, when a dear friend posted a pic of her new plant, and I know that she has a beautiful kitty.
Not that we are going to get ANY new plants in the house; Manny is plant-crazy!

Happy Tuesday!! A Christmas Story and this one is what we watch all day when they play it 24 hours straight. Tonks is such a sweetheart to keep you company at all times. Have a great day and we love the wonderful doodle.
World of Animals Rittenhouse

Tonks is a cutie. I know that is A Christmas Story. :) I love the drawing- A Christmas Carol is one of my favorites, especially TNT's version with Patrick Stewart. Great tips too. And thank you for the kind words you left on my loss of Jinx.

You don't need a blanket when you have Tonks sitting on you! (You'll shoot your eye out!)

Mudpie loves laps but isn't crazy about television and the noises it produces, especially bells! This pet peeve of hers go back to when she first arrived here at her forever home and the 2015 Presidential Primary debates were beginning. If those candidates had stopped speaking when they were supposed to the bells wouldn't have gone off!

For some reason, none of our furry family are huge on laps. It's okay, they are big on beds!