It's Thursday, which means it's time to rhyme. After all, it is the day of Angel Sammy's Thoroughly Poetic Thursday challenge.

As always, our host shared a photo prompt to guide our poetry. This week's prompt was this image here: 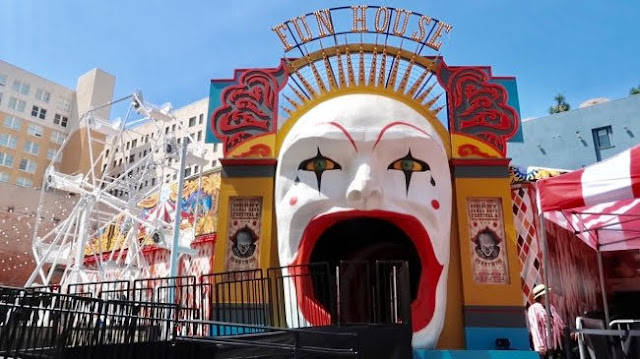 I'm feeling all shades of festive these days, so I wanted to turn this image into a Christmas poem. I took some major liberties, but there is still a clown involved in my poem. If you'd like to read the weird little rhyme, here it is:

Jack, Who Lives in a Box

On a snowy winter day, a family made their way into town.
To the grocery store went the parents and to the toy shop went their daughter, Bonnie Brown.
She stood outside the shop filled with toys, peering at the festive window display.
Her cat named Socks stood nearby and kept an eye on her, as always.
Bonnie gazed and gawked at all the toys with sparkling eyes,
Wondering if any of them would end up under the Christmas tree as a surprise.
Perhaps her parents would pick one out for her, Bonnie pondered.
Or maybe Santa would bring one, of course with the help of Rudolph and Donder.
Just then, a lever on a colorful box in the window began to spin of its own accord.
Bonnie and Socks soon learned the top of the box served as a door.
After all, the top flew open and out of the box sprung a smiling clown.
The girl cheered, clapped, and smiled, whereas the cat could only frown.
"You're fun!" the little girl said to the clown in the bright box.
She turned to her cat, "Don't you think he's fun, Socks?"
The cat sighed, shook his head, and said, "It's a creepy clown in a box."
In turn, the clown in its box said, "And you just so happen to be a cat who talks."
Then the toy looked at girl and said, "My name is Jack, and I live in this box."
The girl said, "Do you think Mom and Dad will let me take him home, Socks?"
Goodness me, I hope not, the cat thought.
The cat didn't want his little girl parading around with a creepy clown in a box, no he did not.

"Bonnie, come along now!" the girl's parents called from across the street.
Her father added, "We're running out of time, if it's Santa you want to meet."
At the prospect of missing Santa, Bonnie bid farewell to Jack in his box and scurried off.
The cat followed, looking over its shoulder at the clown with a scoff.

Santa Claus himself was visiting another nearby shop.
The line to see him was so long that, to see its front, Bonnie had to jump and hop.
She could be a patient girl, though.
After all, she didn't want to be naughty, oh no.

After what might have been minutes or hours, Bonnie stood at the front of the line.
It's time to see Santa! Bonnie thought. It's finally time!
Socks trotted behind the girl and sat off to the side.
He had no intention of leaving Bonnie unattended or being left behind.

"What would you like for Christmas, young Bonnie?" Santa asked.
Bonnie's answer was awaited by both the big man in red and her cat.
Bonnie beamed and finally said, "Can I have my friend Jack, who lives in a box?"
The jolly old fellow smiled, but it was a groan that came from Socks. 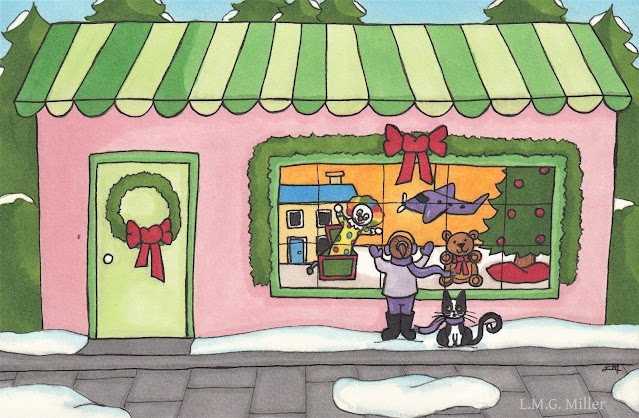 Thimble is here again this Thursday to share some gratitude. What is Thimble thankful for today? 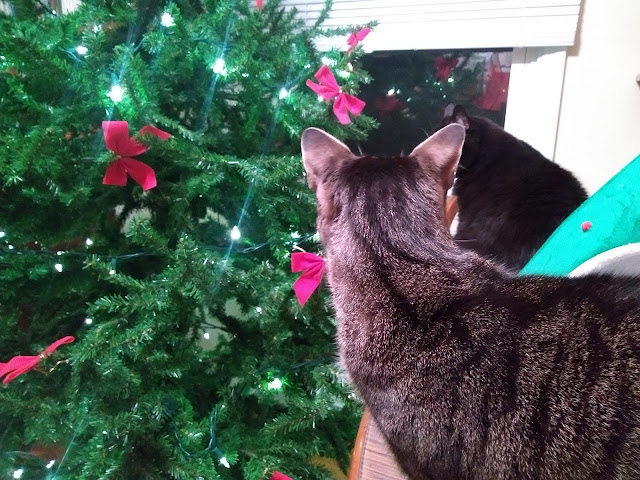 The Christmas tree! Thimble loves spending time near the tree. She also makes attempts to climb it, but if we're being honest, this girl doesn't have the natural tree-climbing skills that Eddy and Tonks have. Thimble will share some of her tree-climbing attempts later this season.
Have a festive Thursday, friends!
***
Last but not least, how about we share the fill-in statements for tomorrow's Friendly Fill-Ins challenge. Ellen of 15andmeowing came up with the first two, and I came up with the second two.
1. I am going to give _________ a _________ for Christmas.
2. I sleep _________ hours a night.
3. My home is decorated with _________.
4. _________ makes me feel festive.

We'll see you tomorrow!
***
Tip of the Day
A series of tips on Christmas tree safety simply would not be complete without a comment or two on tinsel. Long story short, please do not use tinsel if you have furbabies in your life. This stringy stuff can be quite tempting to kitties, for example, but it can also be extremely dangerous. If consumed, it can cause problems such as gastrointestinal obstruction or laceration. Keeping that in mind, if your furbaby does swallow tinsel and you find some hanging from their mouth or even their anus, do not pull on it, as this can cause even further internal damage. If you find yourself in a situation such as this, seek veterinary care as soon as possible. Again, though, to prevent such incidents, it is highly recommended that you simply do not use tinsel as part of your Christmas decorations.
Posted by The Menagerie Mom at 9:32 AM

Would that cats could follow us around!
I could probably carry Manny over my shoulder for a time, but he's too curious and energetic to remain in one place for very long...while awake, that is.
Cute story poem!

Great advice re: tinsel! Have a lovely day!

It was great stopping by for your wonderful poem. Thimble, we have our little ones too excited about the tree being up and they have the same tree climbing problems at well. Maybe they will all master it by the end of the month. Thanks for sharing. Have a beautiful rest of your day.
World of Animals Rittenhouse

My childhood cat Patch got into some tinsel before I was born. My parents rushed him to the vet, who wasn't too concerned, just said to watch the litter box. Thankfully that's how it came out!

Cute poem and drawing. I can see Thimble does like the tree. I am so lucky I have no climbers. Phoebe was my climber, but when we switched to a "skinny" tree she stopped. Great tips too.

We are thankful for Christmas trees, too. As for clowns, they are funny at the circus, but mostly scary in the “fun” house.

Love what you did with the poem-story this week. Nobody but you with your incredible imagination could have gone "Christmasy" with that photo! It was a lot of fun.......I know you will have something spectacular for the photo for next week too.