Out With the Old and in With the New

It's New Year's Eve. 2020 is coming to an end. We're sometimes sad to see a year go. Not this time. 2021 is knocking at the door, and we're here to welcome it. We've got all shades of New Year's Eve fun to have today. Shall we start with a rhyme?

Each week, Angel Sammy hosts the Thoroughly Poetic Thursday challenge. He always shares a photo prompt to guide us, and this week's prompt is this timely one here: 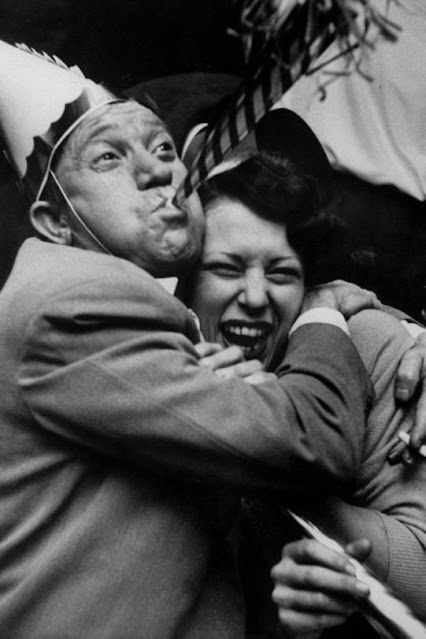 I certainly wanted to write a poem in honor of waving a hefty goodbye to 2020, and so that's more or less what I did. Today is also the Seventh Day of Christmas, though, so there's some festive feels to my poem and its illustration as well. Also, as per usual, I of course threw a couple of obligatory kitties in the mix. All in all, today I have for you a weird and wacky and hopefully somewhat festive rhyme.

Out With the Old and in With the New

The old man stood alongside his wife,
And each held a cat who more than certainly ruled their life.
The house was as festive as their very own party hats,
And on the table equally festive cupcakes waited and sat.

"This is going to be the longest hour ever," the old man said.
The old woman rolled her eyes and shook her head.
She told him, "We've made it this far, have we not?
Now is no time to act like a bratty little tot."

The old man scoffed and said, "Excuse me, but this year has gotten old and stale.
In comparison to other years, it really does pale.
It's ludicrous, an absolute abomination.
This year needs to take a permanent vacation."

"I don't disagree with any of that," the man's wife said.
"But at least we're here to see this year end rather than being dead.
Have some patience, and maybe even a tad bit of class.
Before you know it, this final hour of this horrid year will pass."

The man began to pace back and forth across the room.
The couple's cats accompanied him, though they moved in dashes and zooms.
He huffed and puffed and mumbled and grumbled.
When the cats ran between his legs, he also did stumble.

The old fellow stopped in front of the table on which sat the cupcakes.
He said, "These belong in my stomach rather than on this plate."
When the cats approached, he added, "What if the cats eat them before I do?
An old man like me needs sustenance, too!"

"Patience, old man!" his irritated wife did shout.
Then she nestled in to read a good book on the couch.
The cats climbed the mantle as the old man resumed his pacing,
And then the cats again joined him, though of course they were racing.

The snowy night outside looked bitter and cold,
Which made that year even more sour and old.
At least, to the impatient old man that was the case.
It was now half past eleven, but he wished the time was even more late.

The woman read, the man paced, and the cats ran to and fro.
Finally, there was only a few minutes to go.
The old couple and their cats stood staring at the clock yet again.
Soon, the hour would move to midnight from eleven.

The old couple and their cats cheered and purred for the new year.
After all, the disgraceful old one had finally disappeared.
The old man shouted, "Hip hip hooray! Out with the old and in with the new!
Now, let me have a celebratory cupcake. Actually, I'll take two." 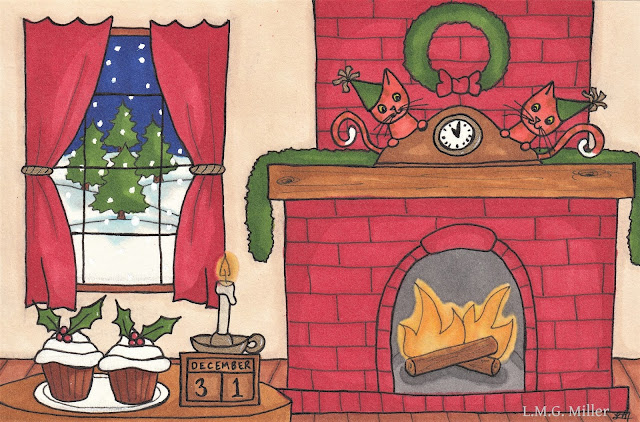 As we close out this year and prepare for a new one, it seems like a perfect time to give some thanks. That's easy to do thanks to Brian's Thankful Thursday Blog Hop.

Thimble is here to give some thanks, and today she is grateful for all of her new catnip toys. She got lots of them from our Secret Santa Paws, that being all of the wonderful kitties and Dad Pete of Tomcat Commentary by Tim. This here mom of Thimble's also got her some catnip goodies for Christmas. 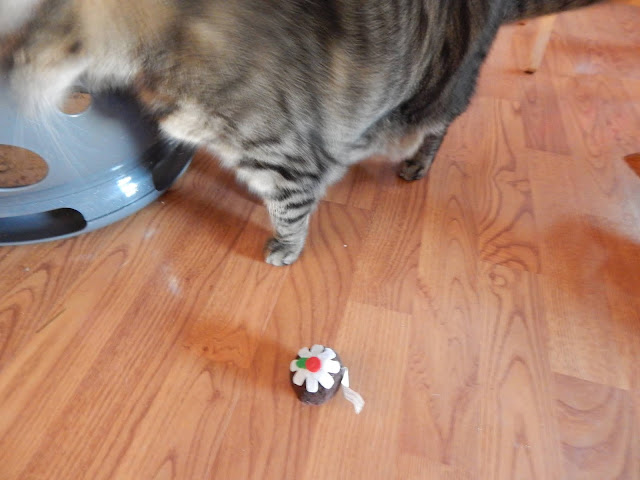 Wow. That's most certainly a blooper. 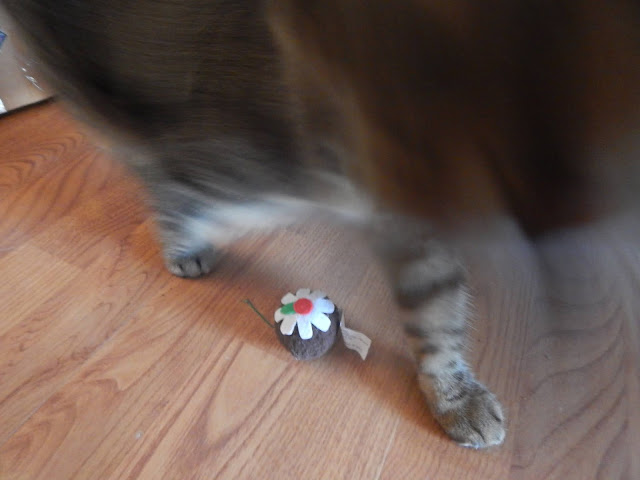 And there's another blooper. You all probably know what a challenge it is to snap a photo of a nipped out cat playing with a toy. But, can you at least see what the toy is? It's a cute little Christmas pudding toy that our local pet store had. Here, Evan agreed to sit still and pose with it so that you all could actually see it. 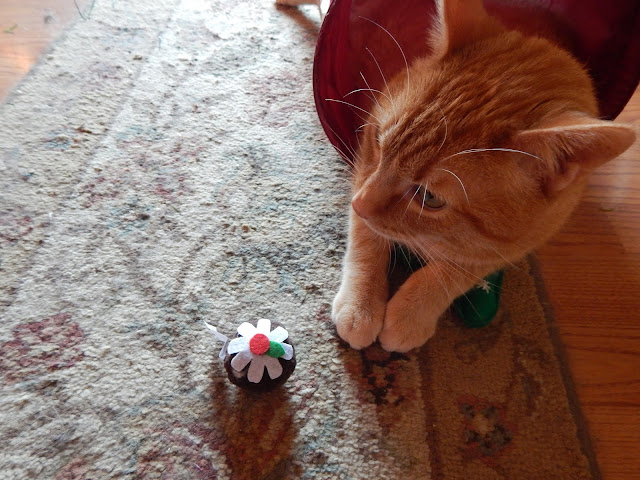 We'll see you next year, friends!

Tip of the Day:

We've been discussing care of ferals and strays during the winter months, and over the past few days our discussions have all been about food and water. We do have yet another tip on this specific topic. When it comes to offering food to ferals and strays, try to keep the location and timing of the feedings as consistent as possible. Keeping a predictable feeding schedule and food location can help an outdoor cat know when and where they can find food. Conserving energy is a very important thing for outdoor animals in the winter, and knowing when and where they can successfully venture out for a meal can indeed help ferals and strays save much needed energy, rather than wasting their energy only to find no food present at their feeding station. Therefore, if you feed ferals and strays, keep in mind that it is very beneficial to the animals if you keep their food on a consistent schedule and in the same location.

Thimble, that sure looks like a fun catnip toy! Is mom exaggerating about you throwing the toy under the couch roughly a gazillion times already? Probably not, huh. MOL

We LOVE the action shots! And the poem! and the Doodle! Your human has talent!
On this New Year, we wish that you have a superb January, a dazzling February, a Peaceful March, an anxiety-free April, a sensational May, and joy that keeps going from June to November, and then round off with an upbeat December.
Purrs
Marv, Jo Jo, Kozmo, Cinnamon and Barb

Fun poem and bloopers, it's just not possible to photograph a nipped out cat. Happy New Year!

Excellent poem and drawing. Cute bloopers too. And excellent tips, as always. XO

Super poem....sounds like my husband, Teddy and me last night - ready to welcome in the new year! Love that little plum pudding toy. Haven't seen one like that.