As always, our host shared a photo prompt to guide us. This week's prompt is this fun and festive one here: 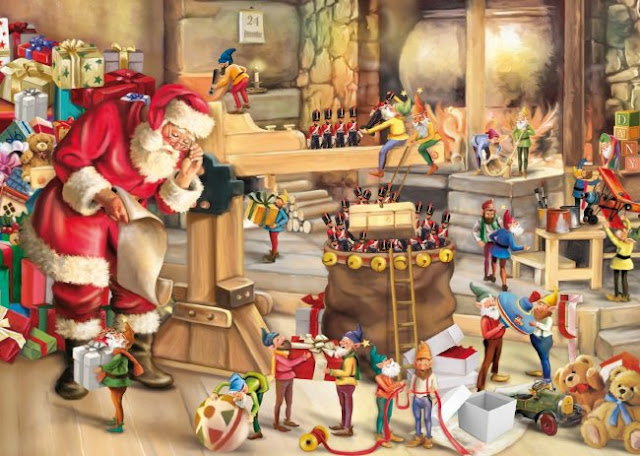 This image brought a lot of ideas to my mind. It of course made me think of the days leading up to Christmas, when as a child I would picture Santa and his elves in their workshop. That being said, as an animal-loving kid, I also always worried that Santa would forget the kitties and pups of the world, including my own furry friends. The furbabies in my life have always gotten gifts for Christmas, though, even my childhood pets. That then got me thinking about a little sign I have hanging in my house as Christmas decor, and this sign simply says, Santa Claus Never Forgets the Cat. I love this sign, and it's always been a true sentiment in my life. So, I wrote a poem inspired by that.

Santa's workshop was a busy place.
The elves crafted toys as if competing in a race.
After all, Christmas Eve was just hours away.
Soon enough, it would be time to prepare and fill Santa's sleigh.

Santa reviewed the letters he had received from children all over,
Skimming through letters from children named Jimmy, Max, and Clover.
Very few children landed on the naughty list this year.
It looked like coal was something only a handful of children needed fear.

Santa checked his gift sack.
Satisfied, he threw it over his back.
Into his sled he climbed and took a seat.
The reindeer were ready, but only because they already did eat.

Soon enough, into the night sky Santa sped in his sleigh.
Off he went, up, up, and away.
He went from this country to that one,
To every little village known to the sun.

It was when he wiggled down the chimney of one particular house that he was surprised.
When he stepped toward the home's festive tree, he was me with some glowing eyes.
Inside the tree he discovered none other than a cat.
Beneath the tree sat another feline, just like that.

Cats seemed to appear here, there, and everywhere,
And then appeared the home's little girl with her messy bed hair.
Santa of course knew her name to be Fiona,
Who lived in none other than the state of Arizona.

The little girl said, "Santa, thank you so very much for my toys.
They truly bring me so much happiness and joy.
But, Santa, did you not read my letter?
Gifts for my kitties would make me and them feel so much better.
I even have a dog who's sleeping in the other room.
You didn't forget to bring them gifts, did you?"

"Fiona, my dear, what kind of Santa do you think I am?"
The man in red continued, "I read your letter. I sure did, ma'am.
I would never dare leave out your kitties or anything like that.
After all, Santa never forgets the cats!
And don't you fear, because I indeed also remembered your pup.
As I recall, she quite likes treats, so I brought her a whole cup."

Just like that, Santa pulled from his bag cat toys and beds galore.
And he indeed did bring Fiona's pup some treats, and so much more.
Fiona clapped and laughed and jumped up and down.
Watching her furry friends enjoy their gifts brought to her face the opposite of a frown.

"Thank you, Santa! Thank you!" Fiona said as she gave the jolly old man a hug.
Then she offered him a cup of hot chocolate in her most festive mug.
After some visiting, Santa turned to the chimney and disappeared out of sight.
Bells could be heard as his voice rang out, "Merry Christmas to all, and to all a good night!" 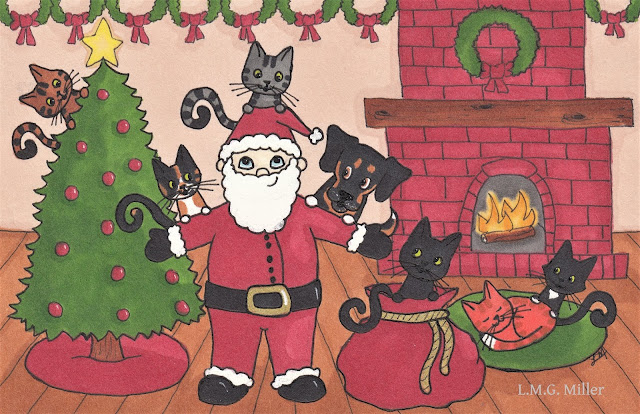 That there doodle is actually one I scribbled up last year. As I was planning out my illustration for this doodle, my ideas for it started looking very familiar to me. I looked through last year's Christmas doodles and found this one, and since it looked so close to the one I was planning on scribbling up for this poem, I decided I'd just share this one as the illustration. This is also one of my favorite doodles I shared last Christmas season, so I figured why not.

We of course are also participating in Brian's Thankful Thursday Blog Hop.

As always, Thimble is here to give thanks. 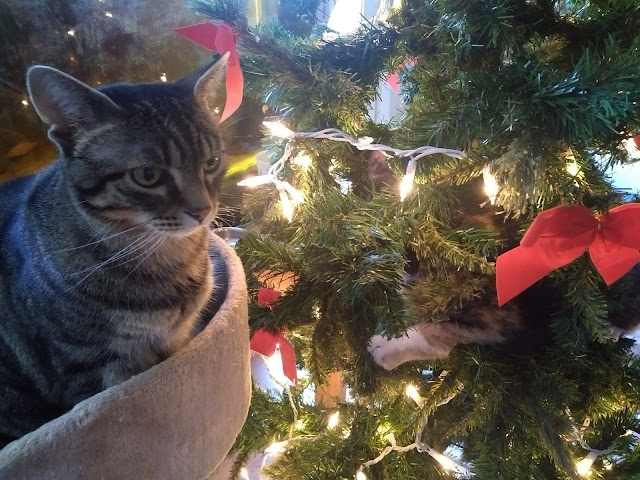 Thimble is so very grateful for the Christmas trees. She loves to hang around the trees and prance around beneath them. Rubbing on the branches is one of her favorite things, as is chewing on the branches. Thimble also often tries to climb the Christmas trees, but she's not terribly successful in these attempts. It does frustrate her that a certain calico is quite good at climbing them. Do you see the calico in the tree in that there photo? 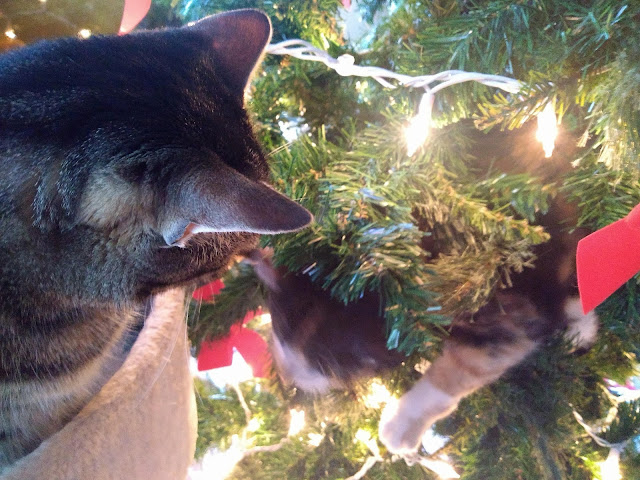 Thimble slapped Tonks a few times in disapproval. I believe Tonks had just been slapped right before that there photo was snapped. Perhaps that's why Tonks is such a blur. Tonks won't give Thimble tree-climbing tips, so there's some squabbling going on.
***
Last but not least, here are the fill-in statements for tomorrow's festive Friendly Fill-Ins challenge. My co-host Ellen of 15andmeowing came up with the first two, and I came up with the second two.
1. My favorite Christmas (or Hanukkah) _________ is _________.
2. This holiday season I will miss _________.
3. I would like Santa to bring _________.
4. You might find _________ under my Christmas tree this year.

Tip of the Day
This holiday season, don't forget the dangers that fire can cause. Some festivities include the lighting of candles, and some of us simply like to light candles for their lovely scents. If you do light candles in your home, as you certainly know, do be sure that these are out of reach of your furbabies for safety's sake. Also, of course, be aware of the dangers the fireplace can pose. If your fireplace is lit, do be sure that your kitty or pup cannot reach the flames, such as by putting up a barrier, or even blocking them from the room with the fireplace altogether. In addition to this, for everyone's safety, don't forget to stay on top of the care and keeping of your fireplace. Before using it for the season, have the chimney cleaned out, so that bird nests or other potentially flammable objects are not lying in wait up there, making a house fire possible. As always, better safe than sorry!
Posted by The Menagerie Mom at 5:52 AM

Santa is one good guy, that's for sure. Thimble, you are one cute kitty, Tonks buddy, I'm sorry you got slapped - MOL!

What a wonderful poem-story........I just knew yours would be magical - you are a big fan of Christmas and all the fun things about it and you didn't disappoint!

That was such a beautiful poem. The photo does the same to us also, when thinking about what Santa and his elves were doing before Christmas day. It was great to see Thimble keeping an eye on Tonks during some tree climbing. Thanks for sharing. Have a great day.
World of Animals Rittenhouse

You are so right, Santa doesn’t forget the fur family members.

Your description of the tree wars made me smile.

Would you believe Mudpie doesn't really show any interest in the tree? I think this is one of my favorites of your poems.

That was a sweet poem. I like the drawing too. Thimble is quite protective of her tree. :) Great tips too- no candles here. XO