As always, our host shared a photo prompt to guide us. This week's prompt is this mesmerizing one here: 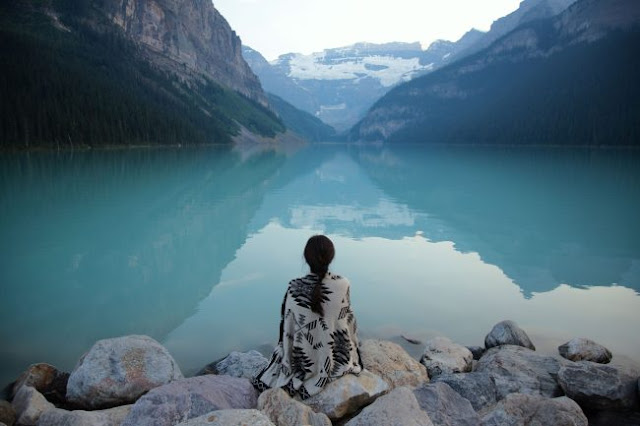 While I was brainstorming this image, knowing I wanted to try to turn it into a festive poem, I heard the song "Christmas Island". So, I used that as a bit of inspiration.
Christmas Island

How did Rachel want to spend Christmas?
How did she want to cope with a stressful time of year like this?
She wished to go to on an island.
Being way out at sea would leave her smiling.

Rachel wished to escape the hustle and bustle.
This Christmas, she just wanted no trouble.
And so, she packed up her stuff and loaded up her cats.
Then she pointed her finger to an island on a map.

Though not easy, Rachel found transportation to this island.
She hoped it would be warm, quiet, and beguiling.
Just thinking of it, Rachel was already smiling.
She certainly didn't expect snow, which on her selected island was falling and piling.

Rachel could not believe her eyes.
She didn't do her research, so perhaps she shouldn't be surprised.
Still, though, there was much disappointment to be had.
For her at least there was, though seeing the snow made her cats playful and glad.

Not only was there snow, though,
But also dozens and dozens of people meandering to and fro.
"What on earth have I done?" Rachel thought out loud.
That's when she saw the sign standing not too far, bold and proud.
The sign welcomed Rachel to Christmas Island.
Though she was frowning, her snow-pouncing cats must have internally been smiling.
Rachel sighed and shook her head.
"I can't believe this is what I've gotten myself into," she said.

Before she could beg her transportation for a ride back away from this place,
He had already turned and retreated, as if trying to win a race.
She was forced to trudge through the snow in nothing but sandals.
On this situation she certainly had only a tenuous handle.

She found lodging at a nearby inn,
Where she was met with Christmas trees and festively dressed folk who did wave and grin.
Her cats made fast friends with all the people around,
All while Rachel could only continue to frown.

The next morning she arose and felt colder than cold.
Her cats, on the other hand, seemed to feel energized and bold.
As she ate breakfast and gazed out the window,
She watched as her traitorous cats helped some children build things in the snow.

Before she knew it, it was Christmas Eve.
Those around said Santa was coming and to get a good night's sleep.
Rachel could only scoff at that.
She shook her head, all while getting scolding mews from her cats.

Rachel went right on ahead and turned in for the night,
But only because she could no longer stand the merry and bright sights.
In the middle of the night, she awoke to a clatter.
Thinking her cats might be in trouble, she arose to find out what was the matter.
"What on earth is going on?" Rachel grumbled as she entered the main room.
Around the Christmas tree, a flash of red did dash and zoom.
Rubbing the sleep from her eyes and taking in the sight,
Rachel found Santa Claus himself standing in front of her on that Christmas Eve night.

"This is some kind of joke, isn't it?" she said
Rachel sighed, scoffed, and shook her unbelieving head.
She added, "I have to get off of the island as soon as I can.
It's driving me mad enough to see a strange old man!"

Santa waved a finger and said, "Rachel, just look at you,
You have your health, so now have a better attitude!
It's Christmas after all,
The most magical time of the year for everyone, big or small."

How does he know my name? she thought.
He should not know her name, no he should not.
Was this, perhaps, maybe, just maybe the real Santa Claus?
The thought gave Rachel more than a moment's pause.

Rachel had never seen such a sight.
Then she wondered, This Santa man, is he right?
She never even knew if Santa was real,
But here he now stood, giving her an appeal.

The old man in red told Rachel to think about what he had said.
After all, he told her, she was lucky and blessed, not sick or dead.
Then he dashed away in the blink of an eye.
But he did not disappear in a sleigh into the night sky.

Seeing movement outside, Rachel peered out the window.
Me oh my, lo and behold!
Santa had sailed to Christmas Island in a canoe!
Though hard to believe, that fact was true!

On that Christmas morn,
Rachel decided to smile a bit more.
Perhaps she had simply received some solid advice.
Or, perhaps there was an ounce of magic on that Christmas Eve night. 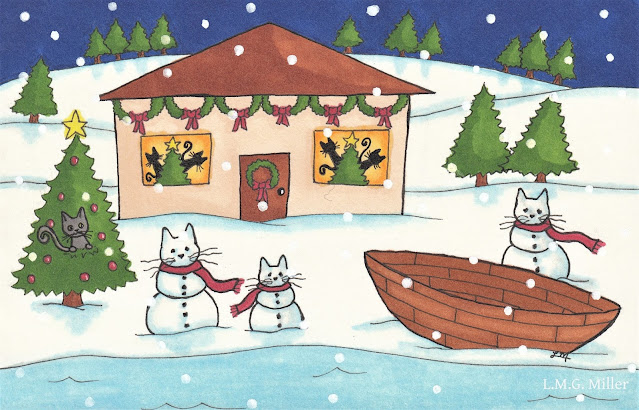 This doodle was one I scribbled up for a Christmas season poem last year. When I saw the photo prompt for this week, I immediately remembered writing a poem and drawing an illustration about a festive island last year. This doodle more or less went with the idea I had for today's poem, so I decided to recycle it. In addition, I'm working on getting brand new doodles ready for the entire week leading up to Christmas, so I went with a flashback poem illustration in order to focus on my Christmas week doodle fun.
***
It is now, of course, time for Brian's Thankful Thursday Blog Hop.

Thimble is always happy to give some thanks. Today, her gratitude is in the form of bloopers. She's thankful that she's making some progress in her attempts to climb the Christmas tree. 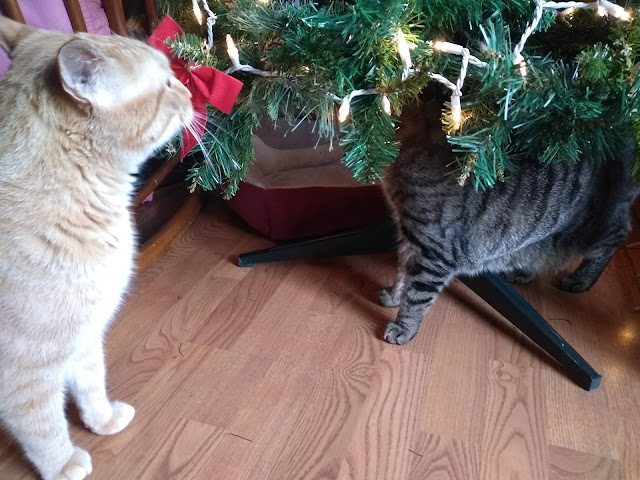 Evan was admittedly not impressed with Thimble's treatment of the tree. 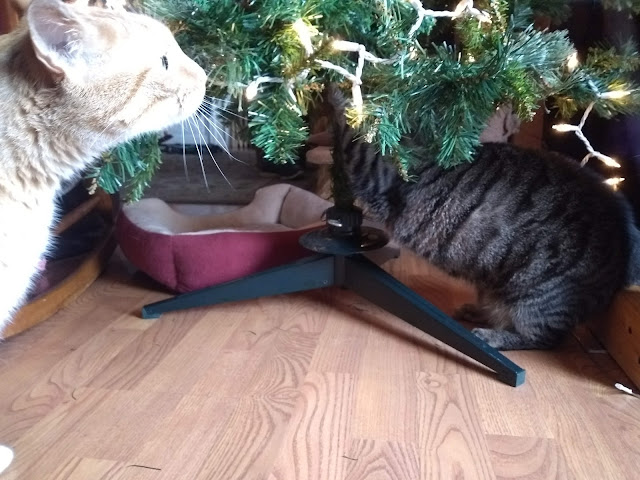 If you're curious why we don't have a tree skirt, there are a couple of simple reasons. First, Evan tends to get caught on tree skirts and to drag the trees around by them because of his hind limb paralysis. Second, Evan is towel trained, and sometimes he mistakes the tree skirts for a toilet. So, no tree skirts around here. 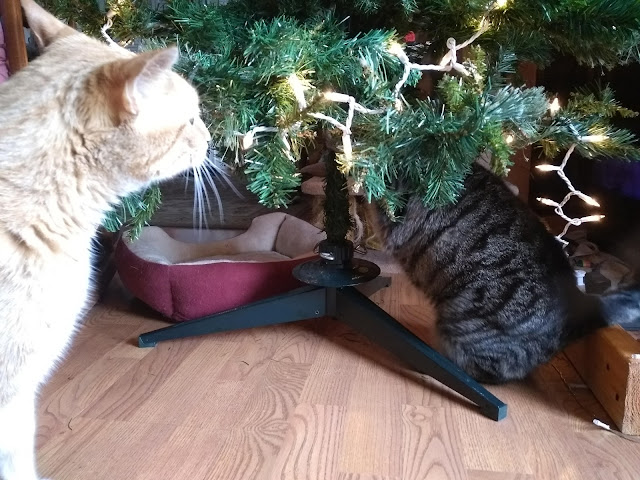 I had to add this final blooper below just for the fun of it, because Evan decided Thimble had enough attention and so he wanted to charge into a blooper of his own. 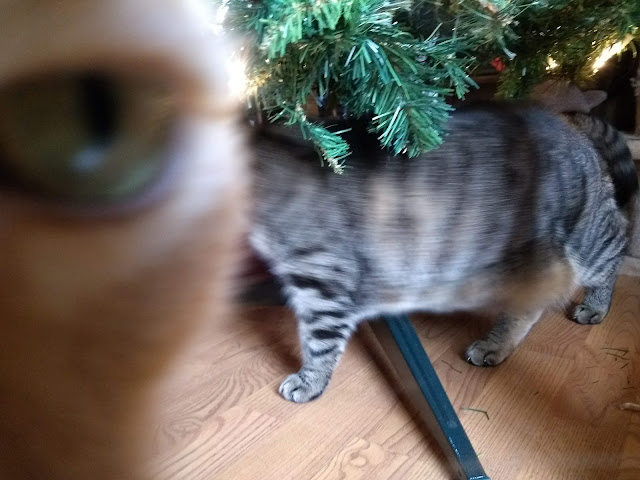 Today is another one of our tips on how to travel with your furbaby this holiday season, or any time of the year. When traveling with your furbaby, consider how you will be traveling and what all therefore might be necessary. Are you and your furbaby traveling by car? Plane? Train? For a plane, train, or other public transportation, do your research and understand what all that particular company might require for your furbaby to board and travel. Is a carrier required? If so, how small or big of one? Is a health certificate required, and/or proof of particular vaccinations? Look into all of this and plan well in advance so that all can be squared away before you and your furbaby head out on your travels. Of course, this is all also important to keep in mind when traveling in your own car. Proper, safe restraint is important even in a car, of course. Have secure carriers for kitties and small dogs, or leashes and seat belts for larger dogs. Even in your own car it is also important for your furbaby to be up-to-date on vaccines and other medical care, in case you should be stopped and asked for proof of their health status. So, while it is often possible to travel with your kitty or pup, do of course ensure that you allow proper time to find out what all you will need for safe and legal travels.

Posted by The Menagerie Mom at 7:23 AM

Christmas night is magical, great poem! It looks like everyone is loving that tree - MOL! Sweet photos.

Loved your poem. Your doodle definitely goes with it.

Rachel may not have gotten what she expected, but it sounds like she got what she needed.

Love the bloopers and thankfuls!

Adorable bloopers! I've never thought of islands as very Christmas-y, but you sure made them so!

What a great poem story - Santa is magic and is everywhere and why not live on Santa Island and get around in a canoe? He's many things to everyone and imagination gives us a chance to prove it! Well done.....

Sorry I am so late, I somehow missed this on Thursday. Great poem, as always and adorable drawing. Cute bloopers too. My Rosie has taken a sudden interest in our tree. Excellent tips too.