Caturday Art with the Letter I

Today for the April A to Z Challenge we have the letter I. For anyone who hasn't heard us repeat this every single day this month, our A to Z theme relates to the fact that April is halfway to Halloween, or Halfoween, and so we're sharing spooky springtime doodles. In this realm of things, what does I stand for? We went witchy for this one, and Rosie found herself with a book or two of incantations. 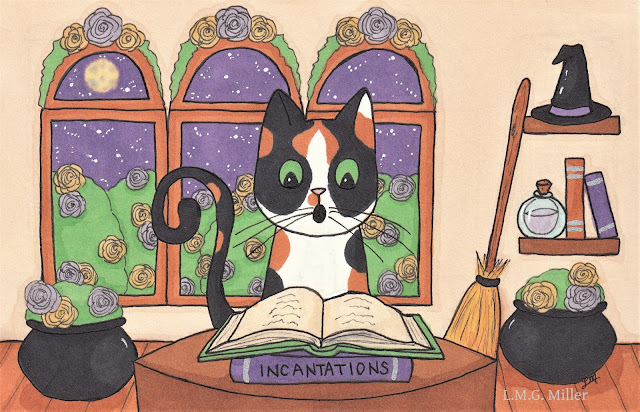 We hope your Caturday isn't as creepy as Rosie's!

Some historical lore would indicate that witches could have animal familiars of various sorts, including cats, dogs, toads, and mice. If such a variety of animals could be considered a witch's familiar, then what made cats such a popularly depicted choice? Some sources state that this simply relates to the fact that cats are seen as nocturnal and independent, which people most readily associated with the supposed evil nature of witches and their familiars. Despite this association, us cat lovers know that our feline friends are not evil, no matter how nocturnal or independent they are.

This is SO adorable!

Very cute drawing. And I know cats are definitely not evil. XO

Rosie surely does look surprised by what's in that book :)

Does she see an incantation to turn people into cats? Nice doodle!

Whoa! Rosie casts spells. Don't want to mess with her.

I hope Rosie find the right spell. I bet it will be for treats and catnip