Tonks Tuesday with a Festive Flashback

Last year, the furbabies here at our house shared a series of festive summer photos for Christmas in July. I had honestly completely forgotten about that until Google Photos showed me this memory from last year: 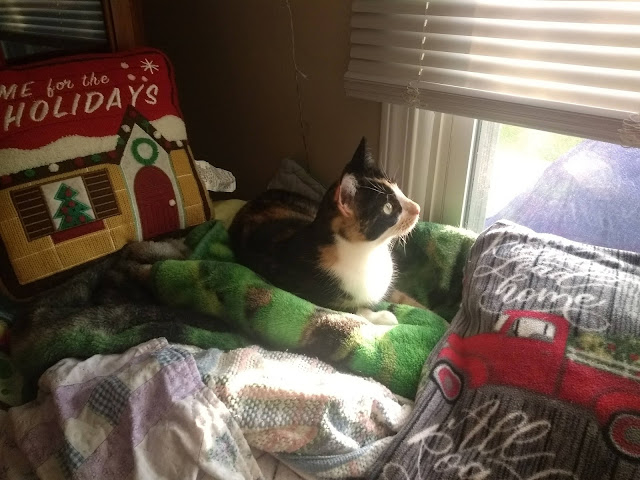 Tonks was feeling festive today, and since I have failed to help the furbabies snap any new Christmas in July photos this year, the calico wanted to share this flashback. That is her in the warm summer sunshine, stealing resting on some freshly laundered blankets that I made the mistake of setting down, and she's of course surrounded by festive pillows that stay out at our house year round.
Tonks hopes she helped you feel festive on this hot summer day!
***
Festive Flashback Doodle of the Day
How about a really old Christmas in July doodle from all the way back in 2018? 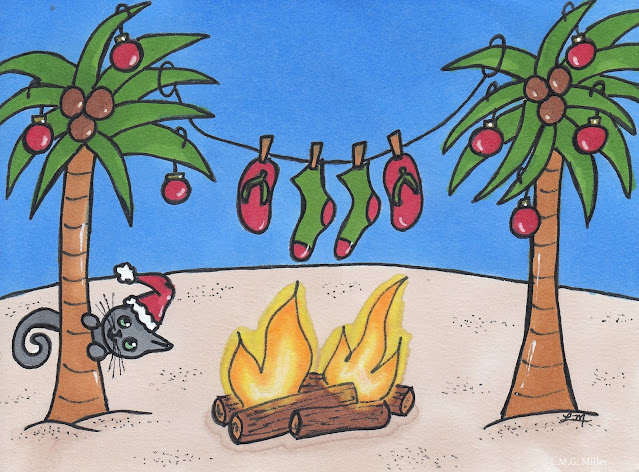 ***
Tip of the Day
We've given tips here and there on cats and their litter boxes. The litter box plays such a crucial role in not only your cat's daily life, but also their health and happiness. That's why we've decided to do an entire, comprehensive series of tips on that box of litter.
The first tip in this series is all about selecting the type of litter box. You wouldn't think a litter box could come in all that many varieties, but the litter box aisle at the pet store begs to differ. Litter boxes come in all sorts of shapes, sizes, and configurations. That means there are a lot of considerations to make when selecting that litter box.
So, let's start with size. Is your cat of the larger variety? Especially in the case of a large cat, it is important to make sure the litter box is big enough. Out-of-box behavior, even if in the form of accidental misses, can occur if the box is too small for the cat. Sometimes, you'll even need to make sure to get a box that is not only large enough but that also has tall enough sides. Some cats are more prone to raising their rear end when urinating, for example, which would mean that a box with tall sides is a far more ideal option.
The above being said, also take into consideration if your cat is small. If you have a petite cat or a kitten, you might at least have to start with a small box. Being able to climb over the edge of the box in order to get inside is of course important. A kitten might very well outgrow their first litter box, but when they're small, they of course need to be able to comfortably climb into the litter box. In truth, though, no matter the size of your cat, stick to whatever size of box they seem to prefer and do well with. Some cats might be large, but also might prefer and do just fine with a small box. Take any such preferences your cat has into consideration.
There are also different shapes of cat litter boxes. There are rectangles, squares, circles, ovals, and even some triangular ones that can fit into corners. When selecting the shape of the litter box, you can base your decision on concepts such as how the shape might affect your furbaby's ability to get comfortable when in the box, or how the shape might affect the way it fits in your home. Then again, as mentioned above, your cat might reveal a preference for litter box shape, and if so, go with that.
Next up is an oft debated litter box detail. And that is, do you get a covered box? Or, do you get an uncovered box? Let's go right ahead and touch upon the fact that, ultimately, the cat gets to pick. Some cats prefer a box that is covered, such as for the sake of privacy. Other cats do not like covered boxes. That being said, covered boxes can harbor smells far more easily than uncovered boxes. Imagine walking into a portable toilet, one in which all of the smells just sit and fester. No one enjoys using a portable toilet, and that might be how some cats feel about a covered litter box. Again, though, the truth of the matter is that the cat should get to pick what kind of toilet they use. If your cat will not enter or use a covered box, but will willingly urinate or defecate in an uncovered box, then an uncovered box it is. If your cat urinates or defecates outside of an uncovered box, but will willingly go into a covered box and use it, then no matter what your thoughts on this topic are, your cat just gave you their answer.
So, when it comes to selecting the type of litter box your cat will use, of course take into consideration their size, whether the box will harbor smells, and other such details. That being said, though, just like us, our cats often have preferences and opinions on various matters. The litter box might very well be one of these matters. That's why, when it comes to any of the details of the litter box, if your cat shows a preference, take note of that and run with it.
Posted by The Menagerie Mom at 12:00 AM

It amazes me that cat litter boxes are so tiny!
Which is why I was delighted to find large ovals at the local feed and seed store; Da Boyz are long and need space!
The sides are high enough, but not too high, because Sweetie is a wee thing.

When it's 87 degrees outside, it's nice to think about Christmas!

I'll happily look at Christmas decor any time of the year, especially when it's yucky hot!

Love the flashback phot and drawing. Great tips too.

We love this photo of Tonks! And cooler weather, like at Christmas, sounds kind of nice right now. :)