Sometimes I really feel sorry for my furbabies. Their mom is sort of addicted to them, and to pointing that flashy box at them. I know that I myself more or less loathe having my picture taken, so what about my furbabies? Do they dislike it as much as I do? And if so, what is going through their minds when I've got that annoying, flashing box thing stuck in their face?

When my mancat Evan was younger, when he still acted a little like the semi-feral little kitten that he started out as, he would go just a tad bit berserk when his picture was taken. What I'm saying is, sometimes even at the mere sight of a camera, Evan would flash his claws and teeth, and he would use them. Needless to say, I don't have all that many pictures of my boy from his younger days.

Over time, though, my momma's boy has vastly mellowed out and matured.  He no longer shows any disdain for the camera. Not even when it's in his face, up close and personal. 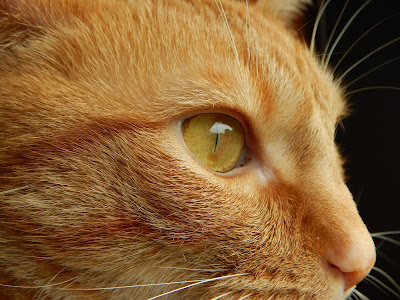 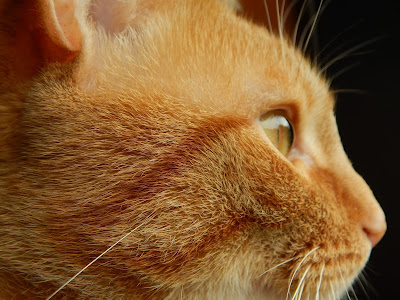 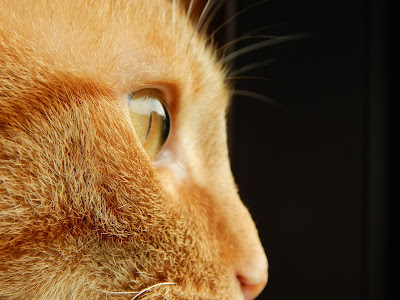 So what about our furiends our there? Do you like the flashy box? Do you model for it? Or do you loathe it? Or, have any of you had a change of heart like Evan?

We hope everybuddy has a wonderful Monday to start their week!

***
Our Tip of the Day:
A while back I gave a series of tips about photographing your furbabies. One of the most important ones, both for you and your furbaby's sake, is to get on their level. This helps you to be more prepared for catching a shot of them, in their element, right at the perfect moment. But even more so, especially in the case of a furbaby not yet accustomed to the camera, getting on their level also allows that flashy box to appear less threatening. So, when ambushing your furbaby with that flashy box, try doing so on their level, which can allow for great shots, but also may help models-in-training to get used to that flashy box.
Posted by The Menagerie Mom at 12:15 AM

Thanks for the photos and the tips.

Most of us don't like the camera either. It just isn't any fun at all. You all have a great day.

Evan what a handsome profile you have.
The flashy beast is okey dokey as long as it doesn't disturb my sleep.
I really prefer mom's iPad...not flashy on it.
Hugs madi your bfff

Evan is so handsome and has a great profile.

Evan, you're very handsome. We don't like the flashy box much. Most of the time, we will look away when the mom tries to take a close up picture, so she's forced to use the zoom setting a lot. :)

I would have never guessed that Evan started life as a semi -feral kitty. I am glad he doesn't mind his photo taken now because I sure enjoy seeing that cute little face. Most of my cats have realized they usually get a snack after a photo so they put up with it. It is almost impossible to get Phoebe with her eyes open even when I turn off the flash, she assumes it is going to be there. And Jinx runs to the camera so I usually just get his nose.

We don't particularly like the evil flashy box, but if Mom didn't take pictures of us, we would not have a blog. Evan, you are so photogenic!

Those are wonderful close ups of Evan! Great advice about photo-taking.

Thank you so much for celebrating my 10th Birthday with me! Purrs, Dragonheart

Him's very cute. We luv havin' our fotos taken. Mommy calls us camera hogs. We's not sure what dat means, but we want all our fotos to be close ups. MOL And we like posin'. All dat candid stuffs not our bag.

He's such a handsome sweetheart. Truffles hated the camera, and I think it's because in the beginning I didn't realize how harsh the flash on my camera is. She was traumatized by it. With Mudpie I've been much more careful, and she doesn't mind the camera a bit.

It must be because he knows how handsome he is. It all depends on their mood with my cats. Sometimes they could care less and other times they get up and walk away.

BOTH of my boys HATE having their photos taken and I use my phone!! They see me coming, they're GONE!!!!!! To get one halfway decent photo of either of them, I often have to take 50! xoxo catchatwithcarenandcody