I'm sure most of us have heard of that show called Kids Say the Darndest Things. Well, I've always thought that our furbabies deserve something along those lines for themselves. I know that my furbabies have plenty of darndest things they do, and sometimes say.

In fact, one of my girl Thimble's favorite pastimes is, well, talking to walls. And closet doors. She loves closet doors. At least once a day, she'll wake up from a nap, go on a little jaunt through the house, and then plant herself in front of one of those towering obstacles and ask it, "Meow?" I never hear the walls or doors offer a reply, but that doesn't seem to deter Thimble one bit. Sometimes she'll carry on with the conversation until I intervene. I'll ask her what's so interesting, to which she'll most often respond by casually walking into the kitchen and asking for food. Other times, I'll open the targeted closet door for her, at which time she might deign to peek inside before sauntering off like I'm daft for thinking that she'd want to see what some silly closet contains. I don't know what is wrong with my silly human brain, assuming she'd want to investigate the closet behind the door to which she was just speaking. Honestly, human, a lady cat's got her standards.

The other day, I had my camera out when Thimble struck up a nice little chat with the door of the front closet. I was hoping for a video to show all of our furiends, but I only managed one picture before she realized she was being spied on. 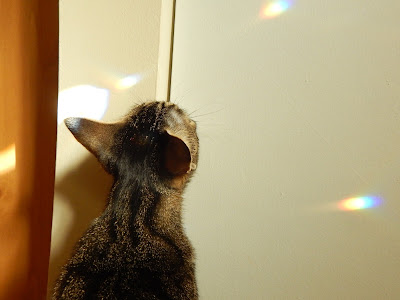 I'd like to think that Thimble was just talking to the reflections on the door. But, just a moment earlier, she had been mewing at the bottom of the door, where nothing but white paint was to be found. What's more, Thimble usually reserves her chats for evening hours, after dark, when no reflections from the sun are to be found.

I have hope that someday I will succeed in catching Thimble's closed door conversations on video. She is not so convinced. 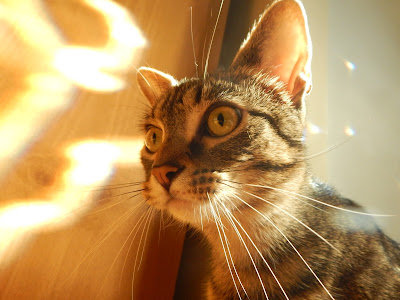 So, do any of our furiends do the darndest things?

Thimble and the rest of us here wish you all a happy Thursday!

***
Our Tip of the Day:
Cat parents all know how much felines love to climb onto and into any and every space they can. That being said, always be sure to check for surprise kitty inhabitants before closing any doors. Check for kitties in the dryer and even the washer before shutting and using it, check for kitties in closets before closing them, and perhaps even in cabinets. If you know that your neighborhood has outdoor, stray, or feral kitties, be sure to watch out for kitties under your car before backing out of the driveway, and check for stragglers prior to closing your garage door if it has been open for an extended period of time. Kitties can be sly and sneaky, so always be on the lookout even where you might not expect them!
Posted by The Menagerie Mom at 12:03 AM

But Mom, there are things, magical things ~ upon, around, beside, beneath and all over the doors. Magical things just for kitty eyes to see ... and I so love to see them all and share a special moment with them ...

MOL! Thimble, you are a silly girl! Does the door talk back to you?? ;)

Oh Thimble, you must be a cousin to our Two Two, she does a lot of the same thing. Maybe they are just talking to hear themselves. You all have a great day.

Lucy never meows at doors but she is the master of the silent meow!

Thimble is such a cutie. Maybe you have a friendly ghost? Lucy used to see something in the front hall and act all spooked. Great tip about closets, we have a lot of sneaks that try to get into ours. Last week Joanie snuck past my hubby and I found her when I got home- along with lots of closed pulled off hangers.

Thimble is such a pretty girl! Maybe she thinks something is in the closet? Connor likes to scratch on the linen closet door. We've looked in there and can't find anything we think he'd be after. I'm sure Thimble is completely sure of what she's doing. :-)

This is so funny about Thimble's conversations! I wonder if she has a sixth sense. She's such a cutie.

Pierrot gets locked in our walk-in closet all the time.

MOL Thimble someone once said my mom would talk to at telephone post (yes she talks a lot) but I never knew anybuddy to talk to a door or the wall.
You are a funny girl
Hugs madi your new bfff

Hmmm....I think Thimble sees more than you think she does. Cats are known for being able to see spirits xoxoxo catchatwithcarenandcody

Thimble is so sweet talking to the doors.

That is so adorable! I sure hope you manage to get video one day :)

I only cry at closets and cabinets when I want them open. I notice from the rainbows on your closet door that you have crystals in the window too. TW locked me in closets twice but always looks like three times in the washing machine.