Last week, pup Astrid got to share her thoughts on some new food as part of the Chewy.com Blogger Outreach Program. Today, it's the finicky felines' turn. The kittens, Tonks and Winky, even helped with this one. (Let's be honest, the kittens technically weren't invited to this food review for the big kitties, but they just sort of showed up anyway. For further details, read on.)

So, what did the kitties try out this month? 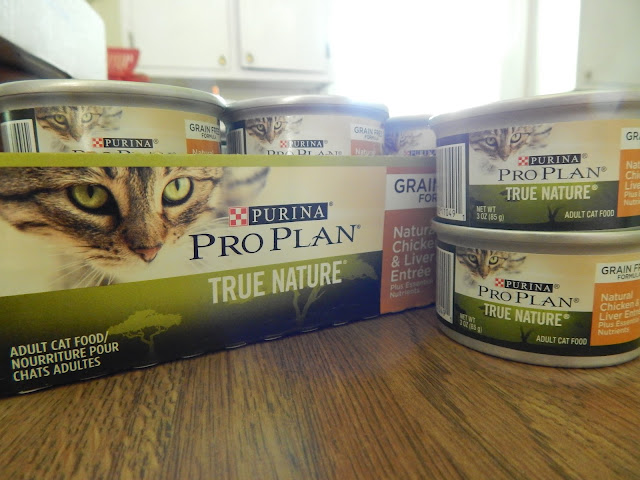 The finicky felines around here tested out PurinaⓇ Pro PlanⓇ True Nature™ adult cat food. This food comes in multiple flavors, but since the kitties around here tend to lean toward chicken, we of course went with the natural chicken and liver recipe. It's made with real chicken and liver, is grain-free, and contains no added artificial colors, flavors, or preservatives.

Even better? This food is of the paté variety. This is a must for the kitties around here, as they don't want chunks, morsels, or anything of that sort in their food. (Well, at least the big kitties don't. The kittens, mainly Tonks, don't seem to care. Food is food for the kittens, and they'll inhale it all.) 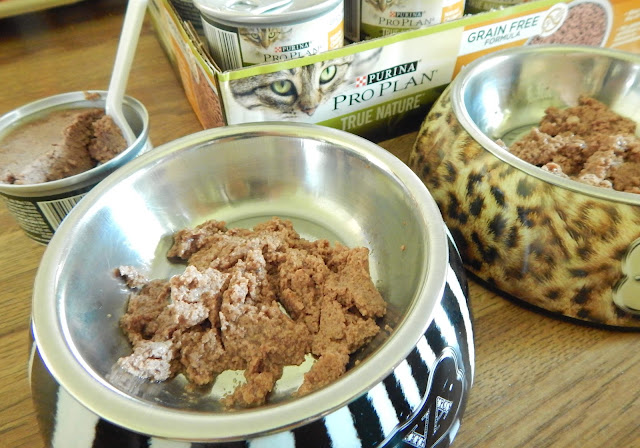 So, given that this is adult cat food, the big kids tried it out. 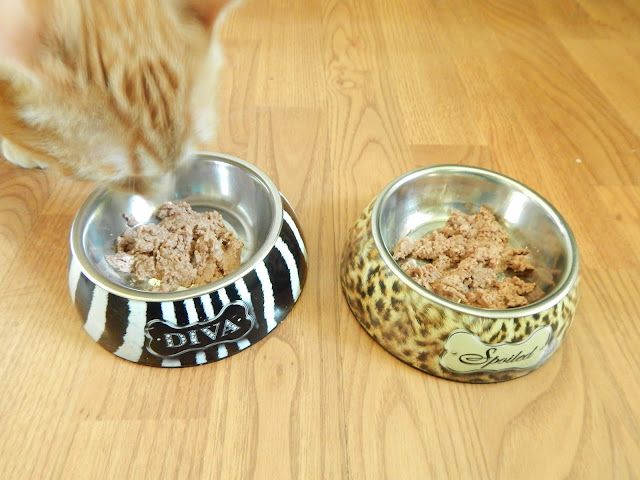 Though Evan is not usually the most picky kitty in the household, he walked up, sniffed the food, and then immediately walked away. The reason this is so strange is that he is the only one who did this. Typically the least picky, Evan was the most picky on this particular day. 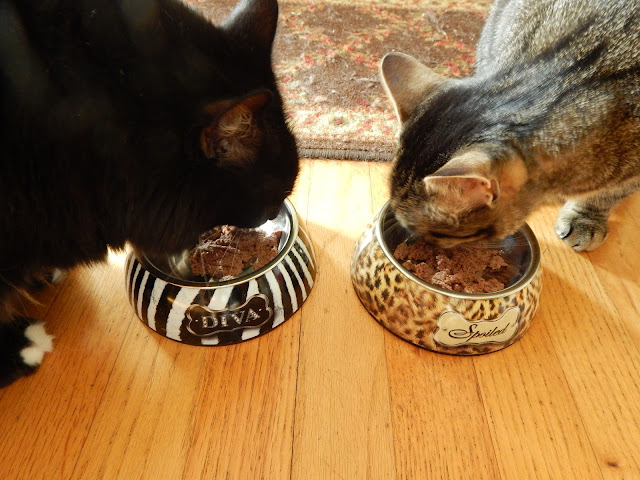 Toby and Thimble both made a meal of the PurinaⓇ Pro PlanⓇ True Nature™ chicken and liver food. Though the cats' levels of pickiness seem to change day-by-day, Thimble is often the most picky, with Toby as a close second. (Well, to be honest, Eddy is the most picky. She won't touch even a single canned food that exists in this universe, though, so I didn't even know whether to count her vote.)

Now, can you guess who else showed up to the party and tasted the food? 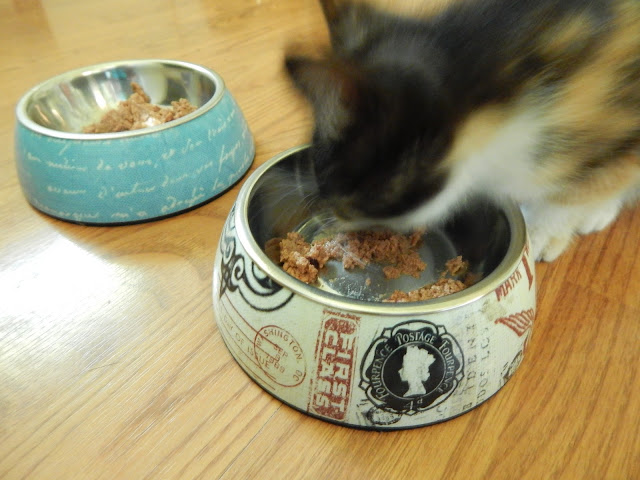 Perhaps you can't tell in that blur, but up there you're seeing Tonks literally inhaling the PurinaⓇ Pro PlanⓇ True Nature™ food. Honestly, do you see her mouth? It's wide open and the food is practically flying into her gullet. 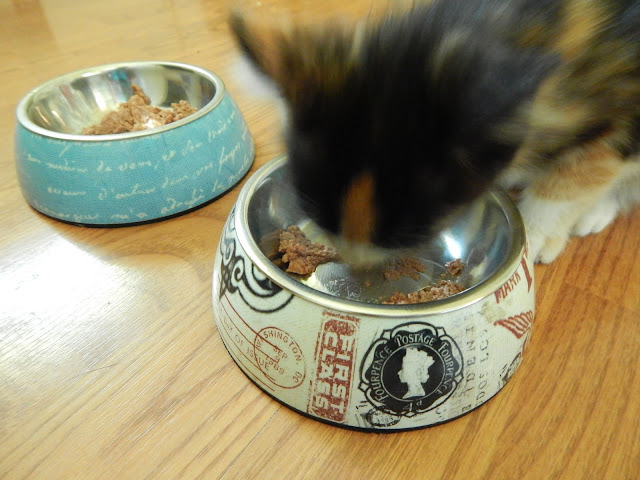 And she kept at it until the bowl was empty. It's like she hadn't just eaten an entire bowl of canned kitten food. 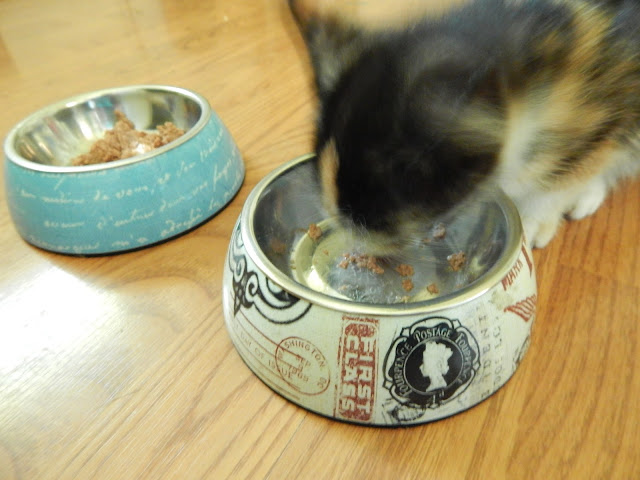 Though I didn't get photographic evidence, Tonks's sister Winky also had a taste. She enjoyed it, too, but nowhere near as much as Tonks did. I think Tonks may be my first evet non-picky kitty. Perhaps she'll prove me wrong when she ages more, but at present, she has shown no signs of being prejudiced towards any foods.

So, especially in a house of typically finicky felines, the PurinaⓇ Pro PlanⓇ True Nature™ food didn't do too badly for itself.


(Disclaimer: As members of the Chewy.com Blogger Outreach Program, we received PurinaⓇ Pro PlanⓇ True Nature™ adult cat food in chicken and liver in exchange for an honest review. All opinions are our own. We only review products that we believe will be of interest to our readers, and we never recommend a product that we do not believe in.)


Wishing you all a tasty Tuesday!

As we mentioned yesterday, around here we're the type who like us some fantasy. That's why it would seem that little bits of magic will be making its way into our doodles over the next few days. We hope you don't mind. 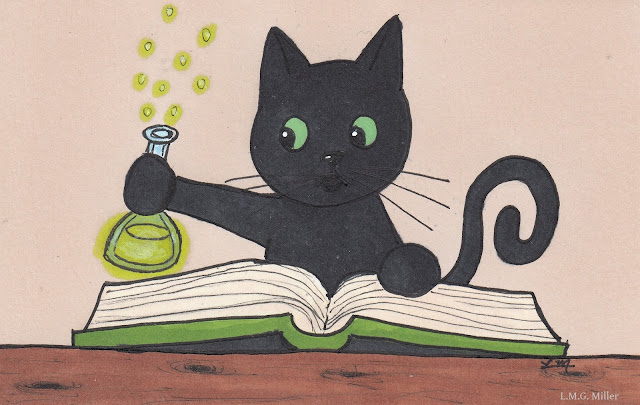 We've decided to do a series of tips on life hacks for pet parents, especially cat parents. These hacks may be all sorts of random, and some of them may even be repeats of tips from the past. But, we hope these might offer some pet parenting tips for saving money, saving space, saving time, and, of course, keeping your furbaby happy and healthy.

Today's hack is about those windows, which may or may not be open during the warm summer months. We're here today to ask if you know that there is window screen tape on the market. Did you know that? If you are in need of a quick or temporary fix for a torn window screen, especially if there is any chance that the window might be opened and a furbaby potentially escape, then perhaps look into having window screen tape on hand. This tape can be applied to a tear in a window screen, and is meant not only to hold it together, but is also made to look like part of the screen. Of course, this is likely not mean to be a permanent fix, and may not be able to hold up to a determined furbaby. It is of course still wise to only open windows when they are safe and when the furbaby is supervised, but it might not hurt to have window screen tape on hand in case an emergency quick fix is needed.
Posted by The Menagerie Mom at 3:32 AM

Well I think Evan was just being "particular" about what he was in the mood to eat. I bet if you try that on him again he'll eat it....! I won't eat ANY wet food - drives my Mom nuts. She's tried everything and all we can figure out is that in my first year before coming here to live with them, I never had anything but dry stuff. At least Mom has me on diet management dry - I'm a BIG BOY! I'm glad most of your crew like the new food though.

Those kittens will eat anything! We love pate foods too...so we'll have to check this one out despite Evan's opinion.

WE might have to check this one out too. It sounds pretty darn good. We all prefer Pate also. You all have a great day and thanks for this good review.

What wouldn't taste wonderful in those beautiful cat bowls!

Thanks for sharing your review. Looks like Tonks was eating like he was at one of those eating contests. You have such beautiful fur babies. Have a great day.
World of Animals

I was wondering why I hadn't seen the chicken and liver variety and then I realized it's pate. Pate just doesn't really register on my radar because Bear detests it. He might actually like this one - the pate looks chunky. And how cute is sweet Tonks?

Tonks is so precious!!! I hope she retains her non-fussiness for you!

Why does it not suprise me that Tonks inhales food like a teen boy? Maybe because that’s how my kittens always do it, too.

We keep the screen tape here to keep the mosquitoes out like screens are supposed to. The windows are only open a bit when we do open them, not enough for a kitty head to get through.

That is funny that you finally have a kitty that is not picky :) I need to get some of this for Emmy, she loves pate and prefers ones with liver in the mix. Cute drawing. Excellent tip too, I need to find some of that. Right now I have medical tape covering the holes in the bathroom screen- not very classy :)

Well done, Toby and Thimble! We're glad you enjoyed that food so much. And Evan, we know you were just exercising your freedom of choice on this one. :)

OMC, we laughed at the photos of Tonks nomming that food! She's like a blur of an eating machine!

I am glad they enjoyed it