We've reached Thursday! Some of you might know what that means. And that is, the Thoroughly Poetic Thursday challenge, hosted by Angel Sammy and Teddy.

Each week, our hosts give us a photo prompt to guide our poetic endeavors. This week's photo really spurs the imagination. See?

I've mentioned here on our blog how my dad instilled in me a love for the fantasy genre. He read fantasy stories to me when I was a child, which led me to continue that habit as I grew older. But do you know what else he instilled in me? A joy for classic science fiction. That's probably why that image up there immediately brought to my mind many, many science fiction novels I've read.

One of my all-time favorite science fiction novels is The Beast Master by Andre Norton. I probably enjoy this one so much because some of the main characters are animals. I could go on, but I guess I should probably get to the point. Long story short, when I saw the above image, with its science fiction feel and the furry friends it includes, I felt inspired to try and scribble up something like this:

The Cat Lady of Mars


Marnie made the move to Mars,
Her travels taking her through the stars.
Don't ask Marnie how it all was possible,
For all she knew was that science made it plausible.

It came down to the fact that times were changing.
Earth was loyal but no longer sustaining.
After all, humans were a rampant bunch,
And so into space they made the plunge.

But that is all just backstory,
And that is nothing if not boring.
So, now, where were we?
Oh, yes, Marnie had flown into the starry sea.

On her adventure, Marnie was not alone.
She was not about to leave her cats at her Earthen home!
On the spacecraft they rode beside her,
Leaving on the seats their sleek black fur.
They napped and remained politely silent,
Marnie's purring companions, Lyra and Orion.

It took time, Marnie had to admit,
To traverse the colossal galactic abyss.
She ate, slept, and read her books,
On occasion stopping to gaze out the window and have a look.
The stars appeared one in the same,
But she knew that each one had a name.

The total duration Marnie did not know,
But, finally, out the window she could see Mars below.
The spacecraft made the descent to land,
Making a whirlwind out of the planet's sand.

Marnie, Lyra, and Orion were about to embark
On a fresh, brand spanking new start.
After all, now they were on Mars!
They had just traveled through the stars!

Marnie knew their new home was nowhere near the port.
The next leg would not be short.
That mattered not one bit, though.
The walk would get them acquainted to this land they did not know.

So Marnie, Lyra, and Orion set out,
And the new land they began to scout.
Marnie never imagined Mars could be so beautiful,
But, indeed, the surroundings were more than suitable.

The traveled across the sands of Mars,
Often gazing up at the sky full of stars.
But the land had just as much to boast,
Complete with tiny seas and their sandy coasts.

Their walk was far shorter than the flight through space,
And before they knew it, their new home was staring them in the face.
Their new home was a house quite humble,
But that did not make Marnie nor her cats grumble.
For, just look around!
All about them beauty did abound.

In their very own front yard was a sparkling lake,
Which was surrounded by trees that in the wind did awake.
From their front yard you could even see Earth in the sky,
Just beyond the horizon, if you squinted your eyes.
Not to mention that the stars still dazzled.
Neither Marnie nor Lyra and Orion felt even remotely frazzled.

But that was just the beginning of their tale.
After all, life on Mars was never stale.
Every day, Marnie, Lyra, and Orion would sit by their lake.
Of course, with them a snack they would always take.
For Marnie it was cookies or crackers,
Or even some walnuts, with the help of a nutcracker.
Lyra and Orion oft snacked on tuna or cod.
Did you know that even on Mars those could be caught?

But this is where the story gets better.
After all, there on the lake there appeared a beggar.
This little visitor looked much like Lyra and Orion,
Except, this cat was purple and had a mane like a lion!
Though her two cats were not all that thrilled,
Marnie made sure that for the beggar some tuna was spilled.

After that, day after day, more visitors would appear.
These Martian felines were special right up to their ears.
While some were clearly like any old cat,
Others were really quite intriguing to look at.
There were tabbies of brown, orange, and pink,
And others that were as metallic as a kitchen sink!

Every day, Marnie brought enough tuna to the lake for them all,
Though Lyra and Orion thought all the fish belonged in their maws.
Before long, Marnie had lost count of her new friends.
Marnie's yard was where all Martian cats' time was spent.

Her feline family grew so large,
Marnie had to build a second house bigger than a barge!
In their new home the Martian cats lived happily ever after,
Oft bringing Marnie a great deal of laughter.

And so that is the tale we've told you today,
Of how Marnie and her two cats flew to Mars to stay.
After their flight through a universe of stars,
Marnie became the Cat Lady of Mars. 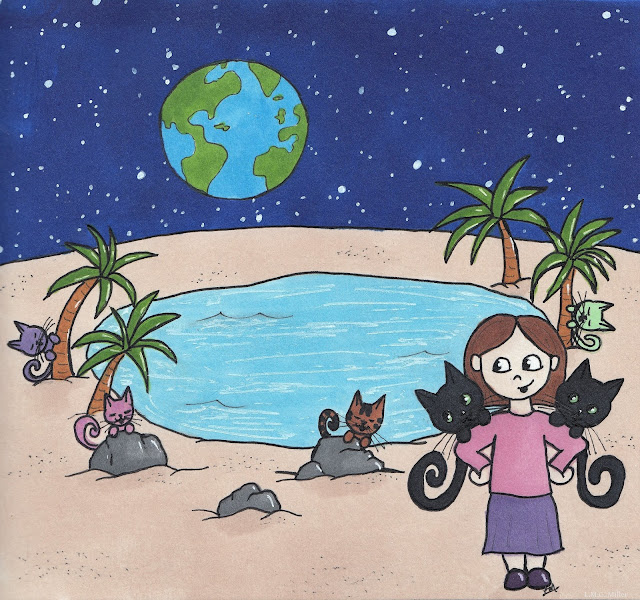 
We scarcely let a Thursday go by without giving you all a dose of Thimble. So, are you ready for some cuteness? 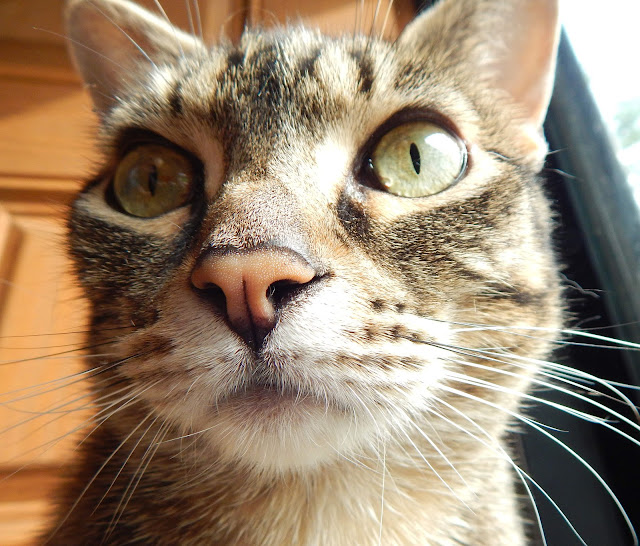 You can blame Thimble's photographer for cutting off her ears and whiskers and for simply being a terrible photographer. 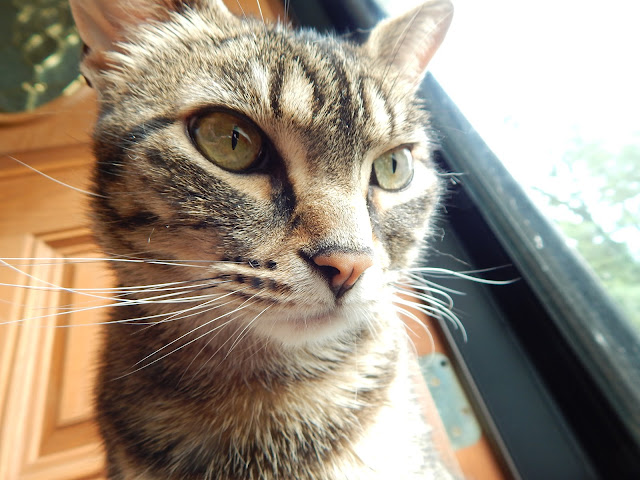 It is also, of course, time for Brian's Thankful Thursday Blog Hop.

Thimble is grateful for warm weather and sun puddles, and for the front door window where she can enjoy said warmth and sun puddles. More importantly, we are so very thankful for all of our family and friends, which of course includes all of you. We appreciate each and every one of you!

Last but not least, it's time to prepare for tomorrow's Friendly Fill-Ins, which you can find below. Ellen of 15andmeowing crafted up the first two, and I came up with the second two.

Yesterday we gave the pet parenting hack of using rubber gloves to remove furbaby hair from sofas, car interiors, and so forth. We failed to mention another option, and so we'll go ahead and do that today. If your clothing, bedding, or similar item is covered in pet hair and you're looking for a quick fix, you can try tossing it in the dryer with a dryer sheet. The anti-static nature of dyer sheets will help keep the hair from sticking to the clothing, bedding, or whatever item is in question. The hair will instead make its way to the lint trap. You could also try just rubbing a dryer sheet on the hairy item, as that sometimes will also help remove hair with the aid of its anti-static nature.

What a wonderful tale! Lucky Marnie - and we think your doodle accompanying Marnie's "brave new world" on Mars is perfect. You always knock it out of the park on poetry day and this imaginative confection proves that point! Thanks for pawticipating and HELLO THIMBLE!

Such a cool poem and wonderful whiskers sweet Thimble! Thanks for joining the Thankful Thursday Blog Hop!

Good to see you Thimble. We really like the poem and the picture. We think the doodle is just too cute too. Have a great day.

This is my absolute favorite of your poems to date. You could make that into a book. Cute drawing too. Great shots of Thimble, she is a cutie. Excellent tip, I recently starting doing this, a pre-dry to get rid of fur before washing. See you tomorrow for the fill-ins :)

No matter where you go there will be a cat lady. I like that.

Being thankful is a good thing.

We love the poem that you shared a lot. It was really beautiful. Also loved the close-up shots of Thimble. She is such a beauty and has amazing eyes. Thanks for the share. Have a great day.
World of Animals

I want to go to Mars too! After all, cats are from space; they've traveled everywhere, and in every dimension and time. "Marnie" was a movie with Sean Connery and Tippi Hedren, by Alfred Hitchcock!

What a fun poem! And a great take on that photo. Mars is a beautiful place. Almost as beautiful as big-eyed Thimble. :)

I cut off ears all the time! Your poem is fabulous, as always. I've never gotten into science fiction, but if it's cat-related I can!

Your poem stories are such fun to read. Happy Thursday!

Your poem is absolutely wonderful! I love the accompanying doodle as well.

It's so nice to see Thimble. Annie has been a victim of cut-off ears too.

I love your poem. You have such a wonderful imagination.

What a poem, and Of Course, What a delightful Thimble!