It's Thursday, and we're ready to rhyme.

Every Thursday, we enjoy participating in Angel Sammy and Teddy's Thoroughly Poetic Thursday challenge. Each week, our hosts share a photo prompt to guide us as we get poetic. The photo prompt for this week is this magical one here:

As you all have probably heard me say roughly a gazillion times, I am a huge fan of fantasy. That's why this prompt had be thoroughly excited. But, if I'm being totally transparent, my poem didn't end up how I'd hoped it would. I went in with plenty of fun and fanciful intentions, and I feel like my poem ended up quite bland and nowhere near as magical as the image. But, such is life.

Once Upon a Time

Once upon a time,
There was a girl named Emmaline.
Her best friend was a cat of black,
And his name was Jack.

Emmaline and Jack spent ample time in the library.
They enjoyed books of fantasy, and even some that were scary.
In these books, they met creatures both feathered and hairy.
Truth be told, they found the most joy in reading of fairies.

They read of tiny colonies in enchanted forests,
A topic that they found not even a tad bit boring.
There were castles run by magical fairy queens,
And fairy rings that were, by human eyes, oft not able to be seen.

It was such tales that Emmaline and Jack sought out.
When the library was closed, they could not help but pout.
This exact thing happened on one fine holiday,
Leaving Emmaline and Jack without a literary place to stay.

The girl and her cat hung their heads.
Where would they go instead?
Without the library, they felt lost at sea.
Left with no other choice, they moseyed down the street.

Their sad stroll led them to a green, grassy park.
How long had they been going, because now it was dark?
Stars lit the domed sky overhead.
Then, suddenly, through the air, laughter did spread.

Emmaline and Jack looked all around,
But they could not see the person who created that sound.
With care and caution, they walked forward a bit more.
Then, suddenly, they were standing on a forest floor.

In front of them stood tree after tree.
Just moments before, not a single tree had been seen.
Not only had trees and more trees suddenly appeared,
But the sound of the laughter had grown louder in their ears.

Where had this forest been hiding?
And from where was that laughter floating and gliding?
Did this all come down to some sort of magic?
Truth be told, neither Emmaline nor Jack would find that tragic.

As the laughter grew louder,
Emmaline felt Jack shuffle beside her.
Then, without warning, he was off.
Farther into the forest he did jump and trot.

Emmaline shouted, "Where are you going, Jack?
Stop right there! You come back!"
Jack, unsurprisingly, did not obey,
Did not listen to a single word she did say.

Emmaline was left with no choice but to follow.
Though beautiful, the forest left a lump in her throat to swallow.
Tiptoeing past the never-ending trees,
Emmaline finally found what she did seek.

Indeed, Jack could be seen not far off.
So could the source of the laughter, which was now quiet and soft.
Emmaline gasped and threw a hand over her mouth.
Out of the ground, toadstools did sprout!
It was behind one of these that Jack currently did crouch.
The toadstools formed a most fantastical fairy ring,
And that was where the source of the laughter could be seen.

The laughter came from what was, quite obviously, a fairy!
She donned hair of pink, a shade not even remotely scary.
Her tiny, winged body stood atop a toadstool bold and bright.
In front of her she held an open book, and to it were glued her eyes.

As she read the words on the pages in front of her,
From the fairy came a bout of lively, happy laughter.
As she laughed, there was suddenly a breeze,
Which made Emmaline sniffle, and then she sneezed.

There was no masking that sort of sound,
And so of course the fairy looked and spun around.
Emmaline was fairly certain fairies were a peaceful race,
Yet she was afraid she might see anger on that tiny face.

But, no, not an ounce of anger could be seen.
Instead, in those tiny bright eyes, there was something like glee.
The fairy cried, "You're a girl!
A real human girl!
And look at that!"
She was pointing to Jack.
"That there, that's a cat!"

Emmaline and Jack stood frozen in place,
Jaws dropped and eyes big and wide on their face.
Not waiting for them to utter a single word,
The fairy's wings flew her over in a blur.
She exclaimed, "I've been reading about your kind in my books.
Such tales are so fun, funny, and have me quite hooked!"

The fairy extended her book to Emmaline and Jack,
Saying, "This is just one from my great big book stack.
You're free to borrow it, to read it front to back.
There's no way you won't enjoy a tale like that."

Emmaline accepted the book the fairy offered.
Though, holding something so tiny was really quite awkward.
The words on the pages were as tiny as fleas,
Making them quite exceedingly difficult to see and read.

The fairy insisted, though, "Go ahead, read on!
You can easily finish this tale by dawn."
Emmaline cleared her throat and squinted her eyes,
And as she read the story's words, she was filled with great surprise:

"Once upon a time,
There was a girl named Emmaline.
Her best friend was a cat of black,
And his name was Jack." 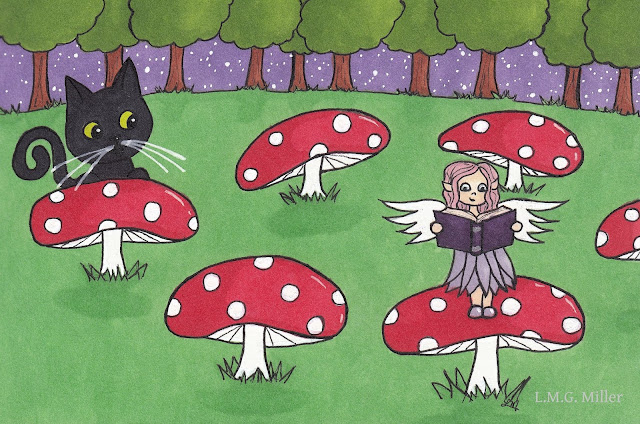 Our Thursday simply wouldn't be complete without Thimble and her Thankfuls. 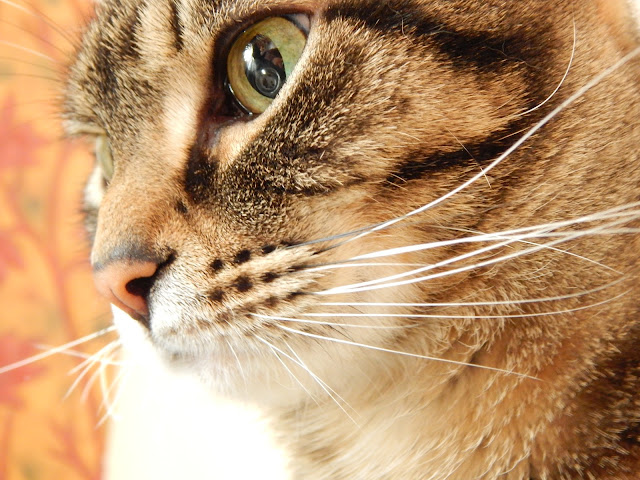 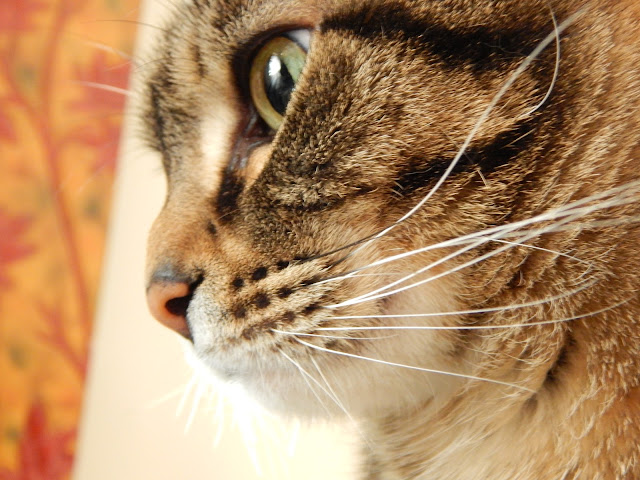 As always, we are also so very thankful for you wonderful friends we have made in this blogging community.

Now, last but not least, we have for you the fill-in statements for tomorrow's Friendly Fill-Ins challenge. Ellen of 15andmeowing came up with the first two, and I came up with the second two.

Today's National Pet Poison Awareness Month tip is one we've touched on time and time again, but it is a pretty important one. As you all certainly know, never forget that some human founds can indeed be toxic to our kitties and pups. Chocolate, caffeine, alcohol, grapes, and raisins are just some of the foods that could lead to extremely dangerous or even fatal consequences if ingested. Also don't forget about the sweetener known as xylitol. This can often be found in sugar-free gums and candies, but also in various other foods, drinks, and even medicines, supplements, and toothpaste. This sneaky ingredient is indeed toxic, especially to dogs.

Though symptoms of toxicity can vary based on what human food our furbaby ate, and how much, signs can include vomiting, diarrhea, lethargy, difficulty walking, or any other number of concerning manifestations. If you know or think your furbaby might have eaten a toxic food, do not hesitate to seek veterinary assistance. Just as with any poison, removing the toxins from the body and treating the patient in a timely manner can be a matter of life or death. To prevent such emergencies, avoid feeding your furbaby any and all foods that you are not absolutely certain are safe.
Posted by The Menagerie Mom at 5:46 AM

We sure did enjoy Emmaline and Jack and the pretty Thimble whiskers too. Thanks for joining the Thankful Thursday Blog Hop!

Sweet Emmaline - and that Thimble is such a doll!

Do you know that Sir Arthur Conan Doyle, of Sherlock Holmes fame, believed in fairies? Adorable story/poem, and I can never get enough of Thimble's whiskers

That was a great poem. Your creativity always amazes me. And I love the drawing too. Thimble is a beauty. Excellent tips too and I can't wait for your fill-in answers.

She has a lot to be admired! Your poem and doodle are impeccable, as always!

That was a fun poem, i don’t know how i would feel if i were the star of a poem in a fairy book.

Thanks to losing internet AGAIN (second time in a week!) we didn't get to read your wonderful poem/story until this morning. What a treat....this is such a lovely story and goes perfectly with the photo Angel Sammy gave us. You always give us the BEST interpretations in poetic form!!