As always, our host shared a photo prompt to help get our creative juices flowing. This week's prompt is this image here:

Though I don't know exactly why, this image reminded of a movie I used to watch all the time as a child. That movie is called The Indian in the Cupboard. I'm not sure if this movie would be considered something along the lines of offensive these days, but I'd be lying if I didn't admit that it's a childhood classic for me. To put it simply, it's about a boy who finds a figurine of a Native American man in a cupboard, and then it comes to life. I took that vague idea, along with the image above, and scribbled up this silly, super long poem:

The Cats in the Cupboard


Little Johnny was elated to have finally made it to spring break.
The only problem was that he was spending it with Grandma Kate.
His grandma was a kind woman who baked a mean cookie,
But she had no television and was a tad bit kooky.

On the first day of his break at Grandma Kate's house,
Johnny could not help but sulk and pout.
He played outside all morning until noon,
But then it started raining much like a typhoon.

After lunch, Johnny threw himself on the couch,
Where he sighed, groaned, and sat in a slouch.
"Sit up straight, young man," Grandma Kate did say.
Then she added, "Rather than sit, why don't you play?"

Johnny bemoaned, "It's raining outside.
It's too wet out there to run or to even play on the slide."
A grin came upon Grandma Kate's face.
She said, "I don't believe you've ever seen my favorite childhood place."

Johnny could not deny that he was somewhat intrigued.
What in the world did Grandma Kate mean?
Finally, his grandmother elaborated on what she had said.
She explained, "When I was a girl, I spent all my time overhead.
I don't mean up in the sky, but in the attic instead."

"That attic?" Johnny practically shouted, sounding daunted.
"Isn't the attic, you know, haunted?"
His grandma may very well have laughed at him.
She asked, "Where did you get that sort of thinking?
There attic contains not a single ghost or monster.
When I was a girl, it was my favorite place to play and ponder.
Now, Johnny, you go on up there and give it a wander."

With a bit of hesitation, Johnny headed toward the stairs to the attic.
He stopped briefly when Grandma Kate said one last thing to him.
"Johnny, dear, stay out of the cupboard up there," she said with a wink and a smile.
"Now, off with you. I'll see your for supper in a while."

The stairs to the attic squeaked and creaked.
Johnny was almost afraid to continue moving his feet.
He still wondered if the attic was haunted.
Even its door looked deadly and rotted.

Johnny would have gladly turned and run the other way,
Except he was still being urged to visit the attic by a smiling Grandma Kate.
The doorknob was just as loud and whiny as the stairs.
He hoped that behind that door did not await a terrifying lair.

Johnny closed his eyes as he entered the upstairs room.
He hoped he wasn't walking straight to his doom.
In truth, though, the attic did not look like a place in a horror story.
It did, however, look a tad bit boring.

Clearly Grandma Kate loved to read,
For books and more books were most of what Johnny did see.
There was a chair and a drawer and that mysterious cupboard,
But what Johnny mostly saw was all that bookish clutter.

Books did not really interest young Johnny.
In truth, they usually ended with him yawning.
"There's nothing fun up here at all," he mumbled.
As he spoke, a thudding and thunking sound came from the cupboard.
The sounds became louder and louder and louder.
Hadn't his grandmother said to stay away from that piece of furniture?
He thought she had, but now he wasn't sure.
Johnny turned away, trying his best to obey,
But then the cupboard began to wiggle and sway.

Unable to ignore it, Johnny made his way to the cupboard.
In all honesty, he shivered and shuddered.
He put out a hesitant hand,
Debating with himself if he should really open it where he did stand.
Then he did indeed open it, wincing and preparing himself for a fright.
Johnny ended up quite taken aback by the sight

It was simply a cupboard filled with stuffed animals, all cats.
There really was nothing even remotely scary about that.
Perhaps the cupboard's sounds and movements had been an earthquake?
He could not think of anything else to possibly blame.

Then, though, the stuffed cats were no longer just dolls.
They began moving, all the way from their fuzzy ears to their fuzzy little paws.
At first johnny felt really quite alarmed
Did these living stuffed cats mean him harm?
Then, one of them jumped on his arm.
It meowed in his face and licked him in a blur,
And then settled on his shoulder and began to purr.

After that, Johnny was not afraid at all.
Rather, he ran and played with the cats all the way until dawn.
He lost track of time as he played with the living cat dolls,
Not realizing it was evening until Grandma Kate made the dinner call.

Johnny ran to the attic door,
Telling his fuzzy new friends to stay put and to not make a peep or a snore.
Instead, they followed right on his heels,
Not listening one bit to his pleads and appeals.

As Johnny opened the door, the animate cats slipped past his feet just like that.
He chased and reached for the wily little cats.
It was too late, though, because his grandmother had seen the scene.
Johnny prepared himself for her to keel over at this obscenity.

Instead, though, Grandma Kate smiled.
Johnny wondered if she was feeling a bit senile.
She said, "Oh good, Johnny, I was hoping you wouldn't listen to your old grandma.
My old mind hasn't been able to work the cupboard or its cats in so long.
I was hoping you would, though,
And you've proven that to be just so."

Grandma Kate looked at each of the cats,
Her hands coming together in a happy clap.
To the cats she said, "Hello, Bippity, Boppity, Boo, Bumble, and Tumble.
It's been so long, and seeing you again has me feeling quite humbled."

Then Grandma Kate patted Johnny on the head,
And spinning in a happy circle she said,
"I think this will be such a wonderful week.
This house will once again be filled with young and furry feet." 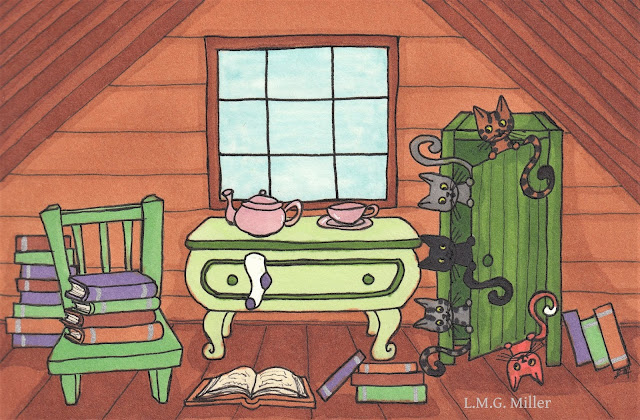 Thimble's all ready with her Thankfuls on this Thursday. Are you? 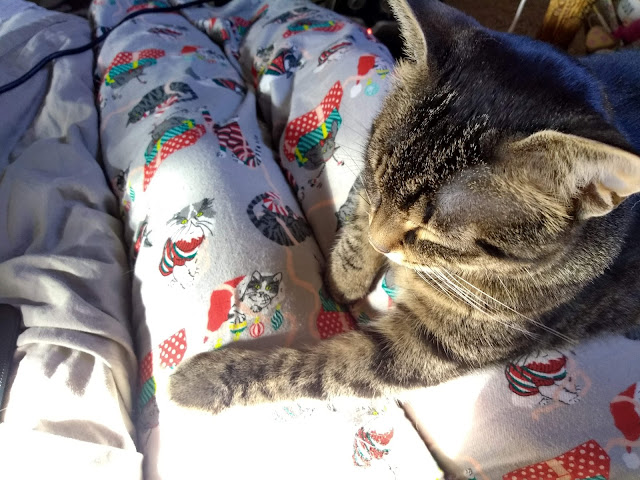 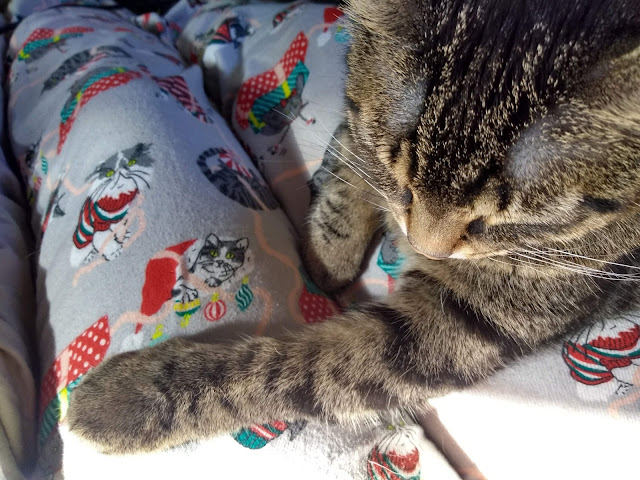 This week, Thimble's Thankfuls are a three in one. She is grateful for her mom's lap, seasonally confused cat pants, and a sun puddle. This girl just loves holding her mom hostage as you see above. I actually quite enjoy it, too.

In addition, if you do use any form of fertilizer, weed killer, or pesticide, always be cautious where you store it. Make sure that it is in an areas that your furbaby cannot reach. And yet another consideration to make is the possibility of your furbaby or yourself unknowingly walking through a treated area while outside. Therefore, after a stroll outside, you might consider wiping off your furbaby's paws, as well as your shoes, to help ensure that nothing unknown is left lingering and entering the home. We can't say it enough times—it's better to be safe than sorry!
Posted by The Menagerie Mom at 7:02 AM

Thimble, you are beautiful, especially with the sun on those pretty furs!

Laps are wonderful sweet Thimble. That was sure a cute poem! Thanks for joining the Thankful Thursday Blog Hop!

I love your story-poems...they always take us someplace wonderful!
And don't worry; I have a pair of flannel pj bottoms with winter holiday cats on them, and I wear them all year!

What a pawsome poem ! Purrs

I don't think I ever saw that movie but I definitely read the book in elementary school. Love the poem (and your pj pants!) I would have a blast going through all the vintage goodies in that attic.

That was a great poem, as always. I like the drawing too. And Thimble is adorable- cute pants too :) And as always, excellent tips. I look forward to your fill-ins.

What a wonderful story poem and accompanying doodle. I knew the attic photo would bring out a lot of interesting poetry and oh boy did it EVER! Thanks so much for never disappointing anyone with your crafty and wonderful tales. Next week's "door" probably will be fun for you too! I think it's wonderful that Thimble enjoys herself a nice warm leg or two.

You have a fabulous imagination!