Our host always shares a photo prompt to help us get poetic. This week's prompt is this pretty image here:

I'm admittedly not a big fan of the beach. One reason is probably because I don't get along well with sand. Another reason is because my favorite sort of setting is something more along the lines of a forest. That being said, I find the above image to be lovely and actually quite inviting. I brainstormed what sort of poem to scribble up for it. I enjoy trying to incorporate kitties or other furbabies into my poems, and that thought alone got me thinking and ultimately led to this:

Home Away From Home

Jim and Julie were beyond ready for a getaway.
They knew exactly where they would travel and stay.
Plans were made and bags were packed,
For Jim and Julie as well as their three cats.

When many people travel they seek someone to care for their feline friends.
As for Jim and Julie, though, they never followed that trend.
Their three cats were named Slim, Sally, and Skip,
And every single one of the three enjoyed a good trip.

There was no cat-sitter to be had for those three.
Rather, they would happily be traveling with Jim and Julie.
With all the plans made and all the bags in hand,
Jim, Julie, and their cats headed off to the land of sand.

Indeed, their getaway was at a beautiful beach,
Which neighbored the bright, blue, and rolling sea.
Jim, Julie, and the three cats would be staying in a quaint little hut,
Complete with a place to eat and a canopy to protect from the sun.

Jim and Julie began their vacation by pouring some drinks.
They took a few sips and then placed them at the cozy table for sitting.
The drinking glasses remained partially full as Jim and Julie unpacked.
They wanted to get that over with so as to fully enjoy the sunset with their cats.

Slim, Sally, and Skip investigated every corner of the hut,
And then they rolled in the sand and dug and dug and dug.
"Don't use our hut as a toilet, Skip!" Julie suddenly shouted.
Skip stopped what he was doing but then immediately began pouting.

The cats then turned their attention to the table,
Where they tested if Jim and Julie's drinking glasses were stable.
They hopped and jumped on the table and then on the chairs.
As they frolicked, Jim and Julie could only shake their heads and stare.

Finally, Jim and Julie finished unpacking their bags.
They sighed in relief and turned to where the table and chairs sat.
It was there that they of course found their three cats,
Who had taken all the seats, right down to the last.

Slim and Skip perched on the two chairs meant for Jim and Julie.
On the table sat their misplaced glasses and Sally soundly snoozing.
"Where are we supposed to sit?" Jim asked.
Julie merely replied, "You don't get to sit anywhere when you have cats."

Just like that, Jim and Julie were sitting in the sand.
Sally, Slim, and Skip remained on the table and chairs in dream land.
While the cats snored, Jim and Julie watched the sunset.
The sun disappeared beneath the sea as it swayed and swept.

As they shifted in their spots in the sand, Jim said,
"We could have easily stayed home instead."
Julie asked, "What do you mean by that?"
Jim replied, "No matter where we are, we get the same treatment from the cats.
This has quite quickly become our home away from home.
Just like every day, we're slaves to cats and never get time alone."
Julie shrugged and said, "Would you have it any other way, though?"
Jim could not help but smile and admit, "I don't believe I would or could, no." 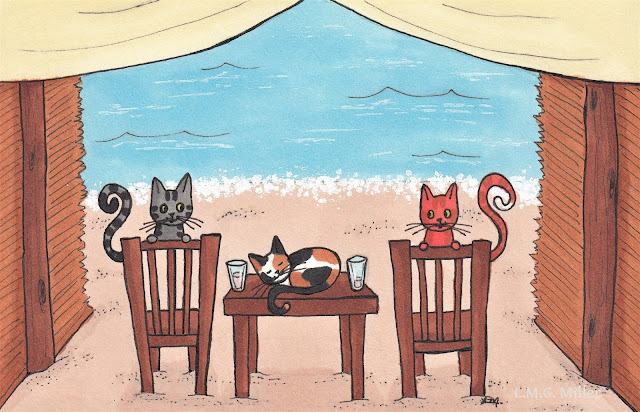 And now Thimble's here with her Thankfuls. 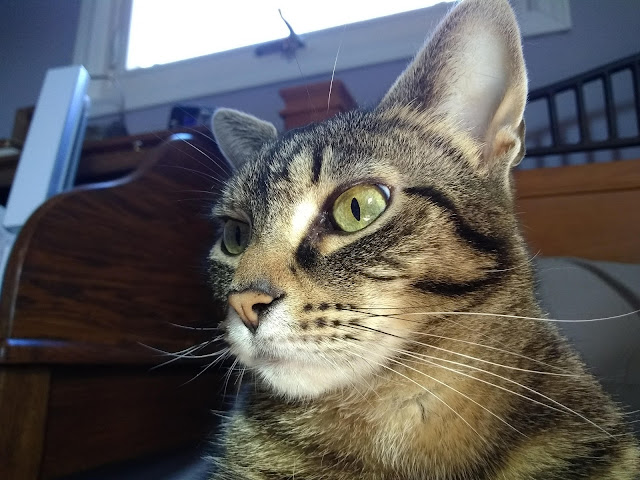 We're also thankful for all of you!

After yesterday's National Pet Poison Awareness Month tip on paint products, we wanted to also give a PSA on the dangers of certain glues. If we're to be honest, the primary danger of glue isn't necessarily poisonous effects. Nevertheless, we still want to warn of the life-threatening hazards of glue. Some glues, such as glues for wood or construction, as well as heavy-duty glues such as Gorilla Glue, can lead to severe side effects. Ingestion of these glues can cause symptoms such as gastrointestinal distress, vomiting, and decreased appetite. What's more, though, is that these types of glues can contain diisocyanates, which can mix with stomach acid and then expand. This can then lead to bowel obstruction. Bowel obstruction is nothing to take lightly, and often requires surgery. Needless to say, if your kitty or pup gets into glue, especially heavy-duty glue that contains diisocyanates, seek veterinary care immediately. Of course, to prevent such emergencies, take no risks and be sure to hide away any and all glues someplace where your furbaby cannot reach.
Posted by The Menagerie Mom at 7:34 AM

Humans dance to the feline's tune, no matter where in the world you are!

What a beautiful Thimble photo! Love the poem, that photo is so relaxing.

Love the poem and doodle...and Thimble, of course! I'm not a beach person either. Yuck.

Great poem and drawing. I am not a beach fan either :) Thimble is a cutie Great tips. I look forward to your fill-in answers.

That's a wonderful poem-story....and you're right - if cats are along, they keep their routine alive and well no matter WHERE they are. I don't mind - I'm used to it after a lifetime of having kitties!! Love your doodle for this photo too. Thanks for being our poetic friend on Thursdays.

Thank you for cheering me with your poem and photos of the beautiful Thimble!