It's Thursday, and that means we have a rhyme to share. After all, it's the day of Angel Sammy's Thoroughly Poetic Thursday challenge.

Our host always shares a photo prompt to help us get poetic. This week's fun and fantastical image is this one here:

I love imagery like this. I find it very quaint and magical. This particular image also reminded me of one of my favorite stories growing up, that being The Secret Garden. In short, The Secret Garden is a book (written by Frances Hodgson Burnett) as well as a movie about a young girl named Mary who is orphaned and goes to live at a house where she finds a secret garden behind a secret door. That being said, I started wondering what might happen if someone in the world of adulthood found a secret door. That's how I ended up with this weird and wordy rhyme:


Mary had finally bought her dream home.
It sat in the countryside, wonderfully serene and alone.
It was a quaint little cottage with a grand yard,
Which spanned in every direction very, very far.

When Mary moved in she had much work to do.
She dusted the walls and swept away dirt with a broom.
As she cleaned the windows, Mary made a realization.
Through the glass she saw that the back yard was a bit of a situation.

Neglect had left the vast yard severely overgrown.
There was knee-high grass and even misplaced stones.
Mary changed her plans when she saw that sight.
She decided to take a break from inside and visit the sunlight.

Mary took outside all sorts of tools to fix up the yard.
She barely knew where to begin, the scruffy yard spanned so far.
She chopped weeds here and chopped weeds there.
It was like cutting a wig of long and tangled hair.

Mary worked her way to the very distant back of the yard.
She was growing tired and was now breathing hard.
At the back of the yard was a wall of vines.
If there was a true wall beneath, it was well hidden from sight.

Mary slowly worked at the vines, pulling, pushing, and cutting them away.
She began to wonder if that task alone would take an entire day.
After what may have been a great many hours,
The vines finally proved slightly overpowered.

Mary could finally see a tiny bit of grey stone wall beneath the vines.
With a bit more work, something else then came into sight.
Suddenly, through the vines, Mary was looking at someone else's eye!
Actually, the eye did not appear to belong to another person.
Behind the vines something else was living and lurking!

After collecting herself and catching her breath,
Mary decided to take a second look, hoping it didn't result in death.
The eye indeed still could be seen.
It was a bright and vibrant green.
The pupil was a nothing but a black slit,
And suddenly Mary slightly recognized it.

Surrounding the eye was fuzzy orange fur,
As well as pointed ears and a set of whiskers.
Indeed, Mary thought, look at that!
The eye belonged to none other than a cat!

Further investigation prompted another revelation to pass.
Mary realized the cat was looking at her from behind glass.
Indeed, the cat stared at from the other side of a window.
With light and life its excited green eyes did glow.

Mary again began pushing and pulling and cutting away the vines,
Peering through them with curiosity at the very same time.
She soon discovered a flower box beneath the window,
Filled with bright and lively flowers galore.

The vines continued to disappear at the hands of Mary.
As she worked, she thought she suddenly saw something scary.
There was more movement in the window she had uncovered.
When she looked, it was a second cat that she discovered.

Mary took a deep breath and gathered the nerve to take a closer look.
When she did so, behind the cats she saw a quaint room with a wall of books.
What on earth stood behind that window on that stone wall?
Was it a home quite eccentric and ever so small?

Mary worked faster and faster, her interest now thoroughly piqued.
As she worked, she heard one of the cats let out a meowing squeak.
After an amount of time that Mary did not know,
She had finally unveiled yet another window.

There was something else Mary uncovered that both excited and terrified her.
It was between the two windows, and it was an olden wooden door.
She at first wondered if anyone lived behind that hidden door.
Then she realized that someone must, of course.
After all, there were a great many bright and lively cats behind that door.
She could see them in the windows and on the quaint room's floor.

Mary stood back and looked at the wall.
With the vines cut away, it looked really quite tall.
Then, hesitant and a bit nervous, Mary moved toward the door.
Finally she knocked once, and then once more

A little old lady finally stood on the other side of the now open door,
Cats climbing her small frame from her head to the floor.
The old woman smiled and said, "Oh, hello! You must be Mary.
As for me, my name is Carrie.
It's a pleasure to meet you on this half of the acre.
It's been so lonely and long since I last had a neighbor." 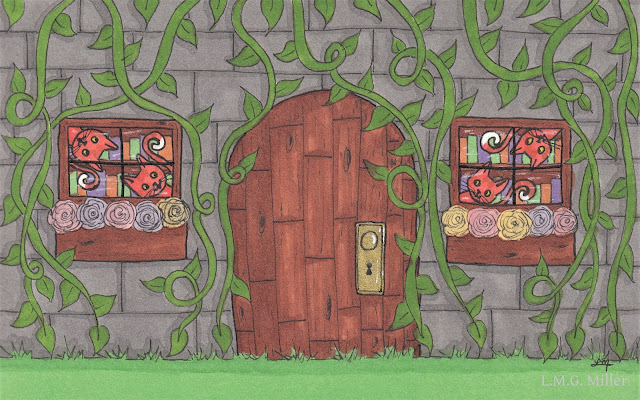 
Now, who's ready for Thimble and her Thankfuls? Can anyone guess what Thimble is thankful for today? 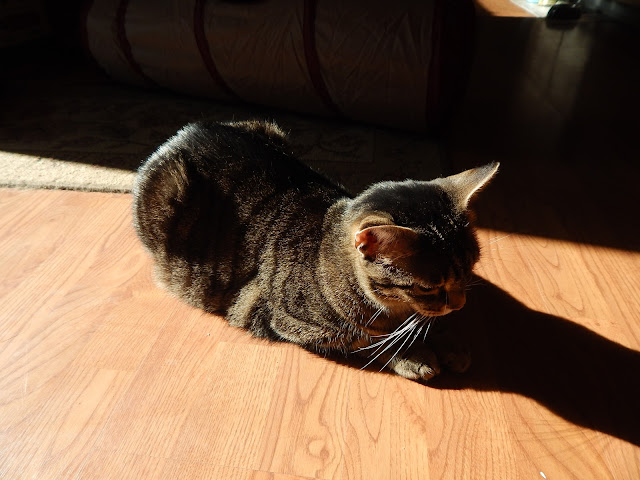 This little lady cat is of course grateful for sun puddles! She's glad we're reaching a season when the sun puddles are more frequent and warm. Oh, and Thimble is also thankful for her shadow, because it's just as cute as she is. 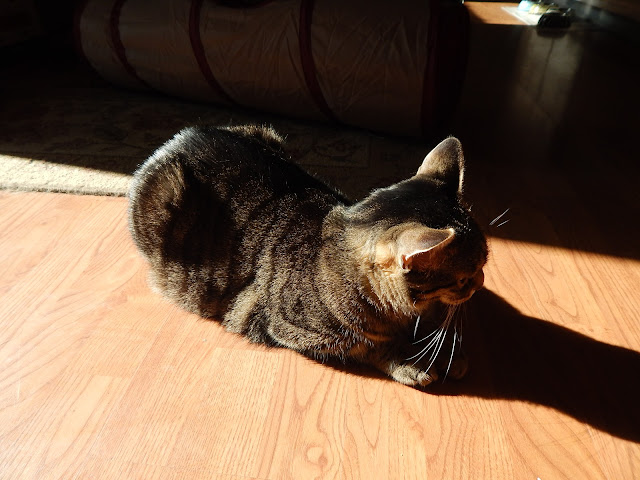 As always, we're also of course thankful for all of you. Thank you for making this such a wonderful community of kind and caring cats and humans!


Last but not least, how about the fill-in statements for tomorrow's Friendly Fill-Ins challenge? Ellen of 15andmeowing crafted up the first two, and I came up with the second two.

Still continuing on with our National Pet Poison Awareness Month, we are today reminding you to keep any questionable kitchen products well out of reach of your furbabies. Just as laundry detergents can be dangerous, so can those used in the kitchen. Dishwasher detergent or tablets, for example, can often have corrosive or other dangerous side effects. Other potentially toxic kitchen products include degreasers, oven cleaners, and drain cleaners. These products can also potentially have corrosive effects, among other adverse reactions. If your furbaby ingests any such products, they might display gastrointestinal distress, oral ulcers, lethargy, or other symptoms. As always, if you think your kitty or pup might have ingested a toxic kitchen product, seek veterinary assistance.
Posted by The Menagerie Mom at 5:45 AM

Love the poem, cute doodle and Thimble, you and your shadow are extra darling today - enjoy that sunpuddle!

That was such a terrific poem!!! Hey sweet Thimble, you sure caught a great sunpuddle. Thanks for joining the Thankful Thursday Blog Hop!

You're a whiz at poems.

Aw on the kitty. Nothing better than a great sun-puddle.

I'm all ready for the fill-ins. Thank you for co-hosting the fun.

Having done it myself, vines can be very difficult to pull down; they stick to the wall and don't want to give up their climbing life!

Thimble who doesn't love some wonderful sun puddles to bask in. We loved your excellent poem. Thanks for the share. Have a wonderful rest of your day.
World of Animals

That poem and your doodle are so adorable! Thimble, aren't sun puddles divine?

Wonderful job with the doodle and poem, as usual. Sunpuddles are chased here, too.

That was a great poem, you never disappoint. I like the drawing too. Glad Thimble got her sunpuddle. Excellent tips too.

I luv sunpuddles too Thimble!

Loved the imagery and imagination in your poem - it totally "went through the door" as your stories always do. By the end of the day yesterday I started thinking about trying to draw/paint doors again. Doors are absolutely imagination-inspiring. Glad you thought so too and your doodle proves that.

A great poem and we really like that sunpuddle Thimble