A Pup and a Poem

Last week Astrid showed you all how good she is at guarding her home from the front window. What she didn't show you, though, is how she sometimes falls asleep on the job. 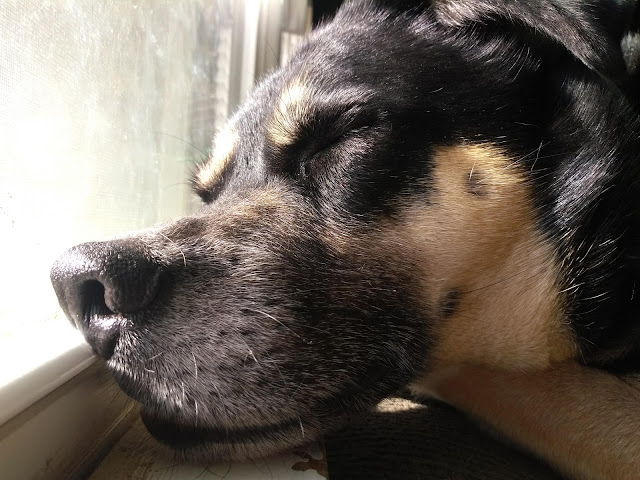 At least her nap is in a warm and toasty sun puddle. 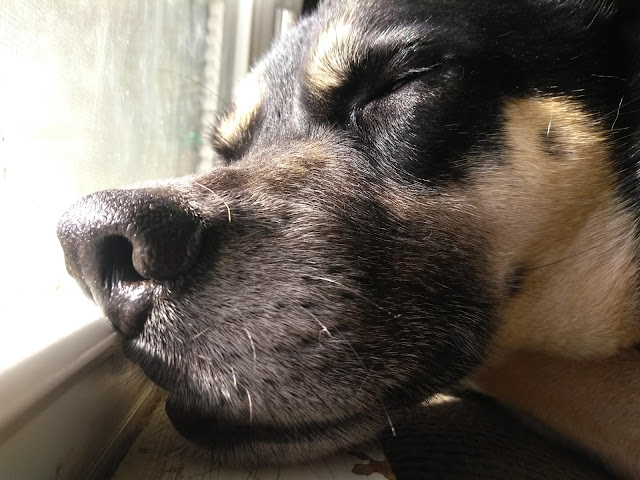 Though she may have been sleeping on the job, Astrid wishes you all lots of snoozes today!

I know I said that we'd be getting back to our usual weekly poetry schedule this week. We always enjoy Angel Sammy's Thoroughly Poetic Thursday challenge, which of course falls on Thursdays. Today is obviously Wednesday, but we're going to go ahead and share our poem today, a day early. This is because tomorrow marks 5 years since my sweet angel Rosie flew to the Rainbow Bridge, and I'd like to make tomorrow's post focus mainly on her. So, that means you're getting our poem for Angel Sammy's challenge today.

As always, our host shared a photo prompt to help us get poetic. This week's prompt is this fun one here:

If I'm being honest, I based my poem on both the above image as well as a flashback doodle I scribbled up last year. Following the daily doodles I created for the April A to Z Challenge, I decided to take roughly a week off from creating and sharing brand new doodles (don't worry, though, because we'll be back to 5 brand new doodles every week starting on Saturday). So, I matched a doodle from last year's April A to Z Challenge to the theme of today's poetic photo prompt in order to use it as extra inspiration, as well as to use it as our poem's illustration. I've actually wanted to write a poem with the following title for a while, and now I got my chance. It's as silly as ever, and I hope you all enjoy it.

Billy was a boy who loved food.
Cookies, cakes, and pies put him in the best of moods.
One day after school he saw sign posted in the center of town.
Seeing it brought to his face the opposite of a frown.

PIE EATING CONTEST, the sign read.
Billy resolved to participate with a nod of his head.
He immediately went home that afternoon to practice.
The kitchen contained no pies, but the cookie jar was full and active.

Billy wanted to make sure his stomach could hold plenty.
Then, at the table with the cookie jar, he was joined by his cat Penny.
Her coat was a beautiful calico pattern.
She was also a bit bossy with a loud, meowing chatter.

Billy set a timer and began scarfing down cookies.
At him, Penny was yawning and looking.
Then, suddenly, she reached for a cookie in Billy's hand.
"Hey!" the boy shouted. "What do you think you're doing, ma'am?"

Billy pulled the cookie away from the cat,
And then he tossed it in his mouth and swallowed it just like that.
Penny grunted and slapped the boy's hand.
Then, on the table she did prance and stand.
She stomped on Billy's cookies and turned them into crumbs.
The sight of this struck the young boy dumb.

"Fine! Fine!" Billy shouted.
He told the cat, "You can have a cookie, so no pouting."
Billy reached a hand into the cookie jar once more,
And Penny was happy for the cookie she did score.

Did it stop there, though?
It most certainly did not, no.
After that one cookie, Penny harassed Billy for another.
She demanded so many that Billy could only shudder.

Thereafter, this happened on the daily.
Penny's love for cookies became something sort of crazy.
Every day, Billy practiced for the pie eating contest.
And every day, Penny treated acquiring cookies like a quest.
Billy dared not deny her the loot.
If he did, she would give him a hiss, holler, and a hoot.

Billy practiced his eating skills for weeks,
Stuffing cookies, cakes, and pies into his cheeks.
Though he always had to share the cookie jar with his cat Penny,
Billy nonetheless found himself pie eating contest ready.

The big day finally arrived.
To be the pie eating winner he did strive.
He arrived early and took a seat at the pie-filled table.
He felt hungry, ready, and pie-eating able.

When the table was finally lined with contestants,
Pies were piled in front of each individual ready to be pie-eating tested.
The pie eating contest referee stood at the ready.
He held his hands on his hips, stern and steady.

Just as the referee was about to shout, "Go!"
One of the judges waved his arms and said, "Wait! No!
We have another contestant who's arrived just on time.
We have room to add one more contestant on the line."

Billy's eyes grew wide when he saw the new arrival.
It was his cat Penny, and about that there was no denial.
The cat mewed as she took a seat next to Billy.
She shook off and twitched her tail in a manner quite silly.

Then, finally, the referee shouted, "Ready! Set! Go!"
The contestants began eating at 100 miles per hour from zero.
The pile of pies in front of Billy dwindled and dwindled.
Then, though, he felt as if he were swindled.
When he had but three pies left, Penny had none.
In truth, the tiny little cat had eaten her pile of pies and was done!

Penny licked her lips and purred.
Then she whipped out a cookie and ate it for dessert.
Billy had to admit he learned a lesson from that girl with Penny for a name.
He learned that if you give a cat a cookie, she'll beat you at your own game. 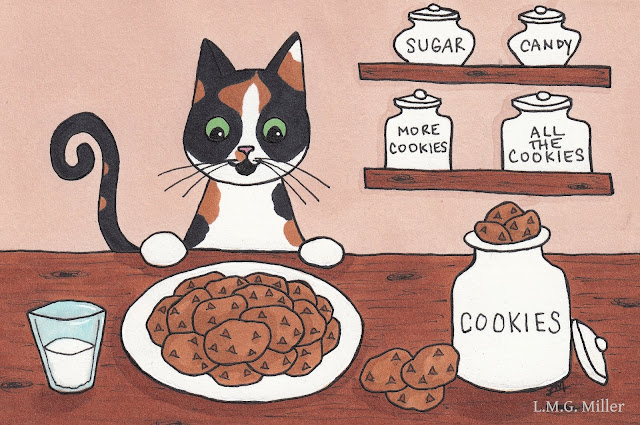 How about a couple more foodie doodles from last year's A to Z Challenge? 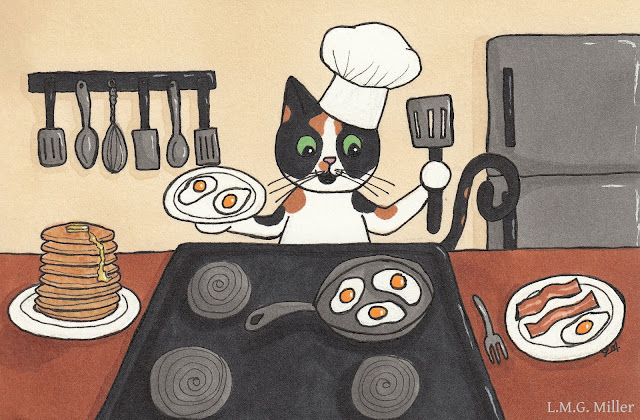 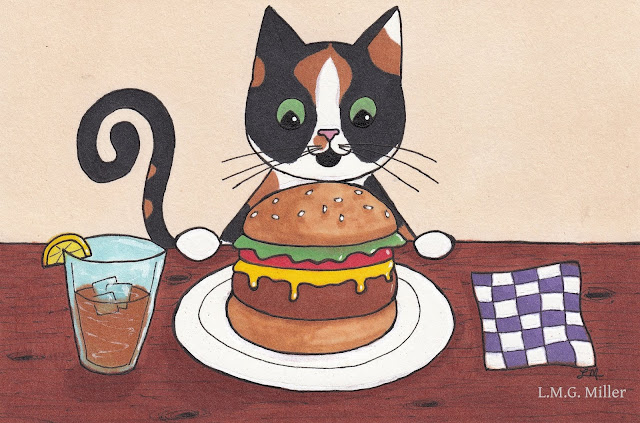 Yesterday we discussed the topic of fleas and the importance of using preventatives. We briefly noted on how a flea infestation can lead to a kitty or pup being infected with tapeworms. Today, we are expanding on the topic of these nasty, wormy invaders.

To begin, as we just stated, a tapeworm infestation can be the result of a flea infestation. This is because fleas can carry tapeworm larvae, and when a cat or dog grooms and thereby ingests a carrier flea, that furbaby can then become infested with tapeworms. Fleas are not the only hosts of tapeworms, though. A cat or dog can also become infected by ingesting a rodent, rabbit, or bird that is carrying them. For this reason, some veterinarians will recommend that outdoor cats and dogs remain on tapeworm preventatives regularly, to prevent infestation in the event that a tapeworm host is ingested during a hunt.

Now that we know how a kitty or pup can end up with tapeworms, let's give a brief summary on the signs. One obvious sign that a furbaby has tapeworms is visually seeing it in their feces, or around their anus, or even in an area where they frequent. What you see in the feces of an infected cat or dog are actually segments that break off of a tapeworm, and these segments are perhaps best described as looking like grains of rice. Other symptoms of tapeworms include a cat or dog scooting their rear end on the floor, to alleviate the itching, irritating sensation of the tapeworm and its segments. In severe cases, such as after a lengthy tapeworm infestation, side effects can include lack of growth or weight loss, or even intestinal blockage as a result of tapeworms.

If you have any concerns that your furbaby might have tapeworms, take your furbaby and a sample of their stool in for your veterinarian to examine. There is the possibility that tapeworms may not shed consistently, and some stool samples may come back as negative even when tapeworms are present in the intestines. This is why it is also important to explain and describe to your veterinarian any signs you have seen, such as tapeworm segments in the feces, scooting, weight loss, and so forth.

These days, treatment for a tapeworm infestation is relatively straight-forward and easy, with the use of parasiticides. Thereafter, prevention is of course also key. Flea preventatives are imperative in ensuring that your furbaby does not become infected with tapeworms by way of fleas. If your cat or dog is often outdoors, and especially if they are known to hunt or ingest wildlife, you can also discuss with your veterinarian giving preventatives more heavily geared toward tapeworms. Tapeworms can hinder your furbaby's ability to thrive, so of course be sure that you understand their risks and do your best to prevent these wormy pests.
Posted by The Menagerie Mom at 12:31 AM

Astrid, neighborhood watching is an exhausting job! All that food is making us hungry.

What a wonderful poem!!!! Such a cute story and so perfect for the photo this week too. One thing I just noticed in the photo was the little boy's shoes.....I think he did his share of walking on some of those berries that were in the pies. haha Astrid looks ready to bark if needed but otherwise taking it easy - as she should. Thanks for playing poetry with us every week.

I adore your poem/story!
We've been 100% sugar-free, since the lockdown began, but I dream of sweet things anyhow!
Astrid, it's okay to nap on the job...I've been having little naps too, while I work from home.

Your posts are just too yummy! Cranberry pie sounds amazing. And Astrid, who could blame you for falling asleep on the job?

Astrid, you are just resting your eyes, right?

The eyes may be asleep, but those ears are on the alert!

Love the poem and the doodles, because while cats might not really eat pie, they certainly will usually beat you at your own game, whatever it is.