I haven't shared many photos of my goofball pup Astrid or my active kitty Eddy this week. That's because these two, easily my most active furbabies, have just not been all that into sitting still this week, at all. To be honest, that's pretty much always the case, especially with Eddy. But, usually I can sneak up on them for at least one or two decent enough photos each week. Well, that was somehow even more of a challenge than usual this week. I was determined to share some photos of them today, though, so here it goes...

Surprisingly, Eddy was the most successful of the two photo shoots. This is because I caught her sleeping: 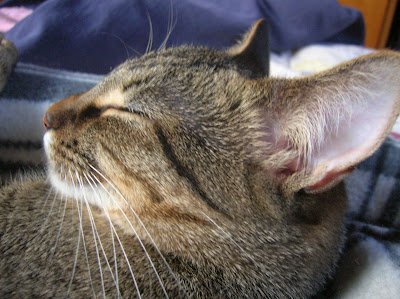 At first glance the photos from her sleepy shoot seemed nice and focused. When I got them onto my computer and enlarged them, though, I was surprised (and, at the same time, not all that surprised at all) to see that, even with Eddy sleeping, the pictures still managed to be a little blurry. 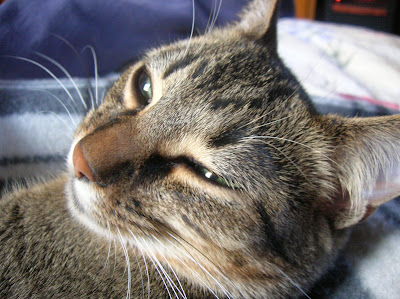 I guess this little lady runs laps and bounces off of walls even in Dreamland.

Next up was Astrid. The resident pup has been especially excited lately, not only because she loves that the weather has slowly been getting warmer, but also because of the addition of our new fish tanks and the accompanying fish and frog. Anything new like this tends to turn her into a little fizzling ball of energy. Luckily, she's always been good about turning some of her energy into chew bone sessions. I thought I'd try to catch some photos during one of these chewing sessions: 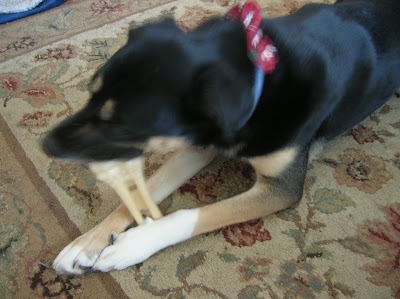 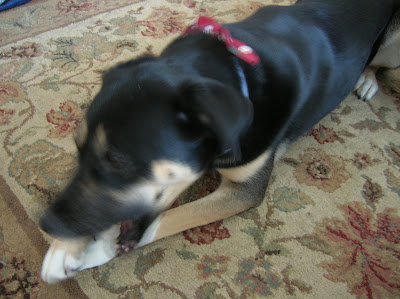 But, alas, even chewing a bone is an action scene for this lady.

Our Tip of the Day:
If your pup seems to have frequent moments of restlessness and boredom, even after being walked and fed, and of course after any medical concerns have been rule out, try creating games or getting puzzling toys that will allow him or her to be mentally stimulated and to expend energy. This could be as simple as you using his or her toys, or even yourself, to create a game of hide and seek throughout the house. Another option are the number of puzzle-like toys available on the market, such as those in which you can hide a handful of treats and the dog has to figure out how to release them. Physical exercise isn't the only way a dog expends energy, because their minds can be just as active as their bodies. So, be sure to stimulate their mind as well!
Posted by The Menagerie Mom at 7:16 AM

Fuzzy or not, great shots!

Great photos. That is a good idea about stimulating a dog's mind. I am going to try that when I go to babysit my niece's baby. Her Jack Russell has a LOT of energy.

We think those pictures are great. I like seeing the ones of Astrid who looks like a great dog. We miss our doggie. She was best friends with all the cats.

Fuzzy or not, we likes them all!

We must all be goin' as blind as mommy, cuz we think da fotos of Eddy are purrfect. We's been havin' trubble coommentiin' on yous bloggy this week, but we's been readin' and tryin'. We sure hope today's comment goes thru. Hope you have a awsum weekend.

Oh, I know all about blurry pictures MOL!!!

The ony thing that looks fuzzy in the Eddy pics is the background and you want that fuzzy.

It's hard to stay still when you are having fun. :)

Much as we hate ta admit, but the sneakiest pictures are often the best.

We enjoyed those blurry pictures as much as Astrid's enjoying that chew bone. And that's a lot!