Mancat Monday: Eye of the Tiger

We've reached another Monday. I hope everybuddy had a wonderful weekend! Now, to help you get your week started, here's a picture of my momma's boy Evan in his favorite snuggle pose: 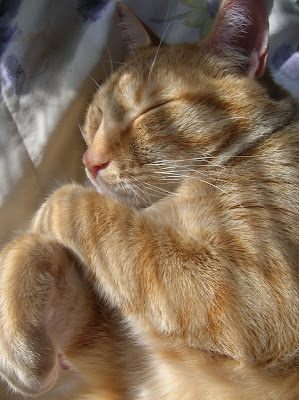 And, here's a picture of this tiger's eye: 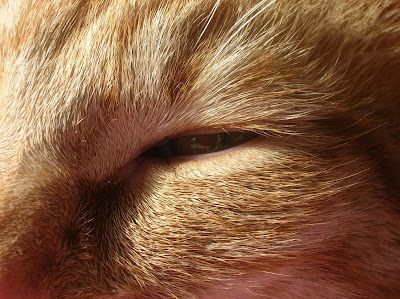 Let's be honest, my goal in the above shot was to get a close-up of my boy Evan's eye open. But, having freshly awoken from a nap, he refused to shake off his squinty-eyed expression.


***
Our Tip of the Day:
As we all know, the eyes are a very significant part of any animal's body. It's important to pay close attention to your furbabies' eyes on a daily basis, as not only are they susceptible to disease themselves, but they can also indicate if an animal is ailing elsewhere in the body. Along with posture, an animal's eyes can give clues as to if the animal is in any pain or discomfort throughout his or her body, such as with dilated pupils, squinting, or elevation of the third eye lids. Those can also be signs of disease in the eye itself, as can redness, swelling, discharge, color change, and any other abnormal observations. Given the importance of the eyes, and given their link and proximity to the brain, consult your fubabies' veterinarian if you see any abnormalities or have any concerns.
Posted by The Menagerie Mom at 6:58 AM

Evan you look so comfy and happy resting in the lovely sunshine. Take care little one.
Luv Hannah and Lucy xx xx

Hi there Evan, what a nice picture of you all sound asleep. Those eyes are so important. Great Tip of the day.

Evan is a cutie. Great tip, if one pupil is dilated, it is very bad- I learned that the hard way.

Always have to keep one eye "open" when the Moms have that evil flashy box!

Evan is soooo adorable - I want to curl up with him and give him a snuggle.

Great information about the eyes! Thanks for sharing :)

Evan looks quite relaxed for a Monday ...oh, I forgot Mondays are just like any other day for our lucky feline friends. He looks great with eyes open or closed!

He looks adowable as always. We took a few liberties and sent you an email. Hope you like 'em, they's not our bestest work, but those kind of fotos are always hard lessen ya' have da right pose in da right size and all. Anyways, have a pawsum day.

He looks so sweet and snuggly!!!

Great tip about the eyes of cats. And awesome photos of your sweet tiger Evan's squinty, sleepy eye. :)

Evan, we don't blame you for keeping the squinty eye. ;)