(Not So) Wordless Wednesday: The Piping Pup 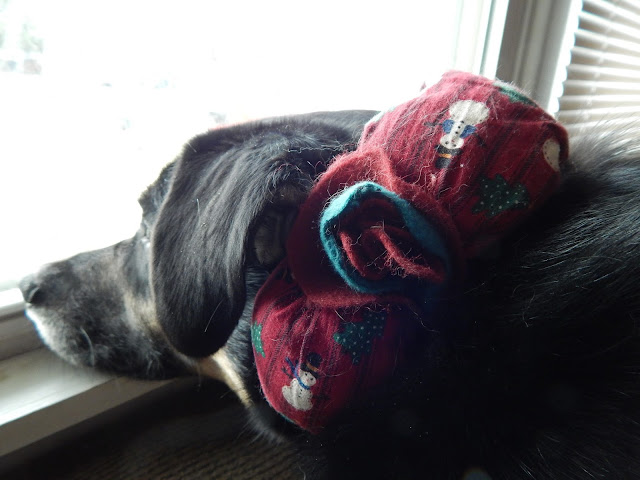 For those who don't remember or don't know, we like to put festive and pretty bows on Astrid's collar. The one above is a revamped version of last year's Christmas bow, which had gotten pretty worked over during all of the holiday festivities. This new version is still decked out with the same good ol' snowmen and Christmas trees, but this time around it's all stuffed and fluffy. Astrid's gammy (this human's mother) makes these ribbons for Astrid, and though the pup herself mainly ignores them, the kitties and myself adore them.

In addition to showing off her festive bow, Astrid also gets to be the piper a-piping on this Eleventh Day of Christmas. 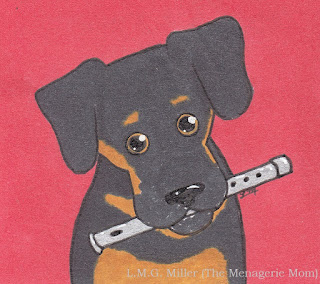 
***﻿
Our Tip of the Day:
We recently had a tip about maintaining safety around toys with dangerous parts, such as bells and other loose ends. Another consideration to make involves squeakers found in many dog toys. Some dogs squeak away with little damage or harm done, while other dogs will rip a toy apart so as to get at the squeaker. Squeakers are often of a size and shape that could potentially lead to choking or other blockage of the airway or intestinal tract. This being said, you know your pup best, so if he or she tends to have an overzealous fascination for squeakers or other potentially dangerous toy parts, always be careful to only allow monitored playtime with such toys.
Posted by The Menagerie Mom at 6:23 AM

You look great in your Christmas bow, Astrid.

Bear will chew string ... he'll chew THROUGH string to make inch long pieces. That's why he's not allowed to have string (like a wand toy) without supervision :p
Looking good, Astrid!

That bow still looks good Astrid.That is some good shrieking Astrid. You all have a good day.

Astrid looks extra pretty with her bow. I love the piper piping, you are so creative. And that is a great tip, I have heard of dogs that always tear away to get to that squeaker.

Astrid, you are all dressed up to play the pipes

You look so adorable in your festive bow, Astrid!

Astrid, that is such a delightful bow even if you're not impressed. :)

Oh, Astrid, that is a beautiful bow that your gammy made for you. So festive! :)

Lorianne, we love the drawing of Astrid as a piper piping. You're always so imaginative and talented with your illustrations.

You make a very good piper, Astrid. That's a lovely bow too.