As always, our host shared a photo prompt to guide us along. The prompt for this week is this magical image here:

I am a huge fan of fantastical imagery like this. What's more, I was really hoping for a magical prompt of this sort of nature. Over the past few days, I've been sharing doodles in a series starring a witch and her feline familiar named Wannabe (because, as I've mentioned before, she's a wannabe Hello Kitty). I'm sorry for how crazy this all sounds, but it is what it is. Anyway. I was hoping to finish off this set of doodles with today's poem and illustration. That's why I was ecstatic to see this image, because a magical image like this would make it far easier to write and illustrate a poem involving a friendly witch and her feline familiar. Anyway. I'll stop rambling and let you read the weird and wacky rhyme, if you so desire.

There was a little girl with a birthday,
And it was the perfect day to frolic and play.
She had hoped for a birthday party,
But her parents said, "That's not an option this year. We're sorry."

When asked what else she wanted for this day she turned 10,
The little girl explained all she wanted was a horse for a friend.
It turned out her parents did get her a horse.
Well, at least they got her a horse of sorts.

The gift the girl unwrapped was a plush horse head on a stick.
She could gallop around, but the horse could neither neigh nor kick.
The horse head on the stick was white with a mane of sleek black hair.
The girl thought it was pretty and about it she truly did care,
But she nonetheless had hoped for a real-life stallion or mare.

The little girl trotted around the yard with her new equine gift.
It was, after all, fun and quite swift.
Suddenly, a white cat appeared by her side quicker than quick.
It wore a pink bow on its head, and the girl recognized it.

Indeed, the girl had been visited by this cat before.
It belonged to the lady who lived next door.
The neighbor woman seemed kind enough and the girl was sure she'd once seen her smile,
But otherwise she was a mysterious lady who only emerged from her house once in a while.
All the girl knew was the woman wore on her head a pointed black hat,
Which had a pink bow on it, just like the bow of the cat.

The cat nudged the new horse toy and then nudged the girl.
At her feet, the cat trotted and swirled and twirled.
Then the cat tugged at the girl's skirt,
And then did the same to her shirt.

It became evident that the cat wanted the girl to follow her.
She trusted the cat, as they had played together many times before.
More than a bit curious, the girl followed the cat.
Soon enough, in front of them stood the woman in her pointy hat.

They had not traveled all that far,
As they had just arrived in the neighbor woman's yard.
To the girl, the lady held out a hat like the one on her own head.
"A birthday hat for the birthday girl," the woman said.

The girl asked, "How did you know?"
The woman only smiled and said, "My name is Jo."
Not wishing to be impolite, the girl said, "It's nice to meet you, Jo. I'm Meg."
Jo placed the hat in her hand on top of the birthday girl's head.

The cat jumped on Meg's shoulder and gave the hat a tap.
"This whiskered thing is Wannabe," Jo said as she gave the cat a pat.
Meg asked, "Wannabe is the name of your cat?"
"Yes," the woman said, "for this reason and that."

Jo then walked over to a big black pot bubbling in the yard.
An ancient book with old pages sat off to the side, not far.
The woman glanced at the book and then stirred the pot.
What was inside it smelled like strawberries, sweet and hot.

The lady named Jo asked the girl, "Would you like a cup of birthday punch?"
The cat jumped onto the rim of the pot and lapped a sip up.
Meg placed her new horse toy on the ground and accepted a cup in her hand.
She wondered if the stuff would taste delicious or bland.

Jo held up a hand and said, "There's one thing you must do before taking a sip.
You must close your eyes and make your birthday wish."
Shrugging and smiling, Meg did as she was told.
The punch was just as lovely on the tongue as it was to the nose.

As she took her second sip, Wannabe the cat let out a mew.
Then, beside Jo and Meg she did zip and zoom.
The cat flashed past the girl and went behind her,
All while letting out meows, chirps, and a few purrs.

Meg turned around around to see what attracted the cat,
Only to find there was a horse standing just at her back.
Where her new horse toy had been placed on the ground,
There now stood a life-size white horse with a black mane, making neighing sounds.

Meg gasped and spluttered and put a hand out to the horse.
It accepted her petting and was quite friendly, surely, of course.
"A horse! A real horse! How did this happen?" Meg said.
Jo laughed and replied, "This was your birthday wish. What did you expect?" 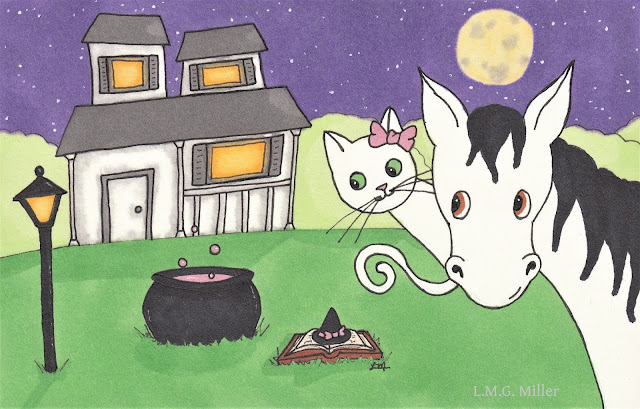 
Today, for Brian's Thankful Thursday Blog Hop, Thimble is thankful for something she's been thankful for before. It is, after all, one of her favorite things in the whole world. 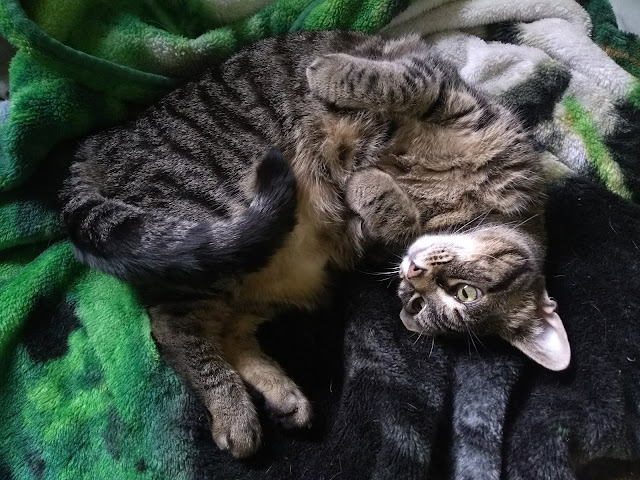 Thimble's grateful for tummy rubs! Feel free to reach through your computer screen and give that belly a tickle. Thimble won't mind one bit.

We're also, of course, thankful for this wonderful blogging community and the friends it's given us!

It is also worth noting that, though nowadays is is believed not as prevalent as originally thought, it is still possible for humans to get Giardia from cats and dogs. For this reason, always be sure to wash your hands after cleaning up their waste, especially if they are known to have Giardia. Giardia is not something to take lightly, neither in our furbabies nor ourselves.
Posted by The Menagerie Mom at 7:04 AM

When we first saw that photo we knew you'd nailed that poem. Tummy rubs are sure fun sweet Thimble. Thanks for joining the Thankful Thursday Blog Hop!

Excellent story/poem!
My sis-in-law contracted giardia many years ago, and she suffered for a long time afterward, including her skin turning orange from the medicines she needed to rid her body of the thing!

What a lovely poem for that photo, wonderful! Sending lots of tummy rubs to Thimble!

Tummy rubs are the best for sure.

I'm all ready for the friendly fill-ins. Thanks for co-hosting the fun.

Well you did a magnificent job of putting together your usual wonderful "fantastical" adventure with a totally magical photo. I loved this photo the second I saw it and knew it would be a GREAT one for Poetic Thursday. All the poems I've read today have been REALLY fabulous. I do enjoy fantasy artwork like this and this particular photo is of a screensaver I found in images on Google. I just love the magic.

Thanks for playing poetry with us!
Hugs, Pam and Teddy too

I'm not sure which is more outstanding...Thimble's tummy or her mom's creativity!

That was an excellent poem. You are so creative. I like the drawing too. Nice tips too.

Such a cute poem!

That is a fun story, if only it were to easy to make birthday wishes come true.