Pup Astrid found out Evan showed off his toesies yesterday, and so she wanted to show hers off today. 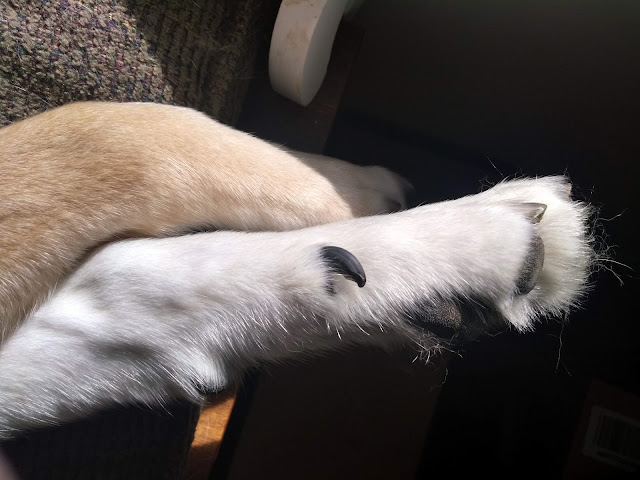 Much bigger than a kitty's toesies, huh? That's also before pup Astrid had her nail trim. She doesn't mind nail trims too much, though, primarily because she gets peanut butter if she sits still.

We're finally sharing our newest series of doodles. It stars books and cats, which is certainly nothing new around here. Nonetheless, I was inspired by imagery of old-fashioned libraries, and so that is what I was going for in these doodles. 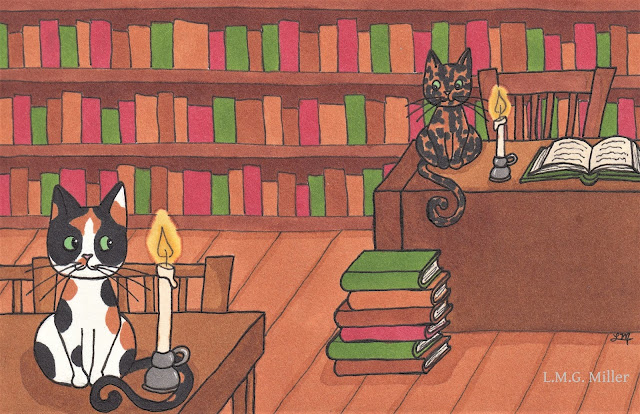 If I'm being honest, these bookish doodles are also yet more concept art for some of the stories I'm scribbling up. Just as is the case with my doodles, animals as well as books play a large role in the stories I'm writing. I have to stick to what I know and enjoy the most in this world.

Today's tip is a small bit of advice that you all very likely know. It relates to trimming those furbaby claws, specifically getting a cat or dog used to this chore from an early age. If you adopt a kitten or puppy, try to get them used to having their toes touched. You don't have to actually trim their nails more often than is needed, but when they're young, regularly practice touching their toes, pushing on their paw pads in order to expose the nail, and so on and so forth. This might not work on all furbabies, and not all kitties or pups will suddenly be okay with having their nails trimmed, but it's worth a shot to get a kitten or puppy used to having their feet touched so that cutting their nails will not be as much of a battle in the future. In some instances, you can also try to get newly adopted adult animals used to having their feet touched and claws trimmed with the frequent practice of handling their feet. You can also get them accustomed to receiving treats or other rewards after having their toes touched and their nails trimmed. In that way, they can associate a nail trim with something tasty or fun. So, keep this in mind next time you adopt a kitten or puppy, or even an adult cat or dog. Nail trims can be a difficult thing to accomplish, but you can make it far less traumatic for all involved if you get a young or new furbaby used to having their feet handled from early on.
Posted by The Menagerie Mom at 12:00 AM

Good looking paws there, You all have a fine day.

Those are some big paws!

Terrific doodle!
The only claws that I'd like to trim would be The PO'M's, 'cause he's causes all kinds of pulls on my clothes!
But, he's outside, so nope, no trims for him.

Precious paws! Adore that doodle too!

Beautiful paws, and i want to live in a library with cats.

Very nice toesies. I like the drawing too. And excellent tips. as always. I trim many of my cats' nails, but Jinx and Polar Bear- not a chance.