After yet another fight with my internet, I'm finally getting today's post shared with you all. It's the day of Athena's Caturday Art Blog Hop, and so here's another doodle in our series starring Edgar Allan Poe and his tortie Catterina. Can you tell which story this one's based off of? 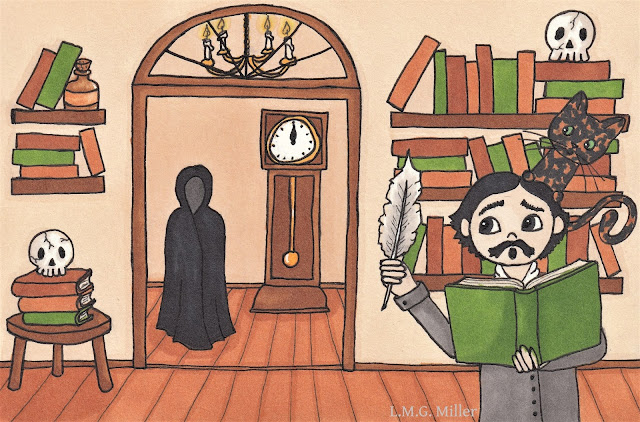 If you are indeed wondering which story this is based off of, it's Poe's "The Masque of the Red Death". It's yet another macabre tale, but we hope our cartoon version of it doesn't give you too many nightmares.

Did you know that roughly 1 in 3,000 tortoiseshell cats, or torties, are male? In order to be a tortie, a male cat has to have an extra X chromosome, which in turn means these male torties are almost always sterile. How about a bit more trivia on male tortie cats? Did you know that, in ancient Celtic history, having a male tortie in a house was believed to bestow good luck on the home? And did you know that, according to Japanese fishermen's lore, a male tortie could keep ghosts off of a ship? Torties sure are something special!

Each doodle is more fab than the last! Yes, torties are purrfect in every way.

Torties are amazing, and male calicos are rare, too, as you know. Our shelter has had two or three male calicos over the years, but no male torties.

Your drawing is just right.

Oh yeah, that tale is a creepy one, for sure. Your doodle definitely does it justice!

Pretty scary! We shared a male calico a few months ago.