It's Mancat Monday. You know what that means? It means you get a dose of Evan today. More specifically, you get a good ol' view of his adorable nose. 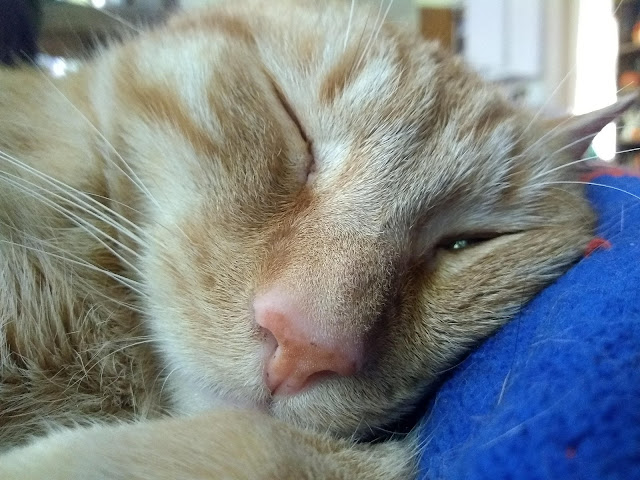 Is that not a magnificent mancat nose or what? Don't you just love all those freckles? I sure do.

As we mentioned yesterday, we're sharing a few more flashback doodles than usual for a week or two while I work on some writing projects and while I also work on some of the autumnal doodles I already have planned out. The first series of flashback doodles I'm sharing was created back in 2018, and it's all about furry friends and their writing projects. A little like this: 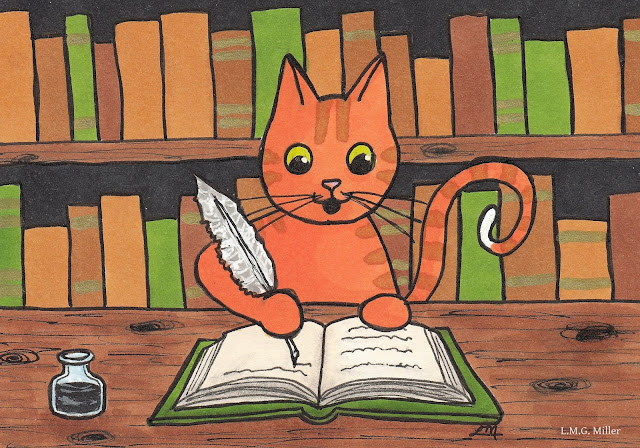 Did you know that melanin comes in two forms? Melanin, as you all certainly know, is the pigment responsible for the color of skin, hair, and eyes. The two forms of melanin are eumelanin and pheomelanin. Eumelanin produces colors in shades of black and brown. Pheomelanin produces colors in shades of red and yellow, or cream. This means that orange tabbies, ranging from bright orange to creamy orange tabbies, get their pigmentation from pheomelanin. Pheomelanin also plays a role in the orange color of calicoes and torties. Black and brown shades on cats, on the other hand, are the result of eumelanin. These two forms of melanin also of course play similar roles in dogs, humans, and other species.

Evan, the mom wishes she could kiss that nose.

Evan, it's quite obvious that you were having a nice snooze before the camera showed up!
The Vikings prized ginger or orange cats. We haven't yet had a ginger kitty here at Eastside Cats, but maybe someday.

Awww, Evan you are the sweetest boy ever!

Evan you and your freckles are adorable. Writing Cat Flashback is writing back!

Evan you have the most handsomest face of any ginger cat we know! (Except Gabriel of course)

Happy Mancat Monday Evan!! We just love seeing your up-close photo of that adorable nose of yours. Such a sweet photo of some zzzz's. Thanks for sharing. Have a great rest of your week.
World of Animals

It's a purrfect nose!

Evan is a cutie. I like the flashback. And I did not know about malanin.

Never was there a better nose!