Today's post is up late not because I forgot to schedule it, but because I've been trying to out-stubborn Blogger. I did not win. Sometimes Blogger does not cooperate when I'm trying to share images in a post. It mainly started doing this when I switched to the new version. I've been noticing a somewhat constant stream of updates and changes to the new version of Blogger, though, so I'm hoping this image issue is just as kink in the system that will get worked out soon. After all, a couple of other issues I was having with the new version of Blogger a few weeks ago have sorted themselves out.
Luckily, I already had a couple photos for Mancat Monday in a draft of this post from a couple of days ago, so Mancat Monday is still on. The issue is that I have a new doodle to share with you all, but Blogger is refusing to let me share it for the time being. I've even tried plain and simply copying and pasting my doodle into the post, but there are various errors I'm getting from those attempts. For whatever reason, though, Blogger is allowing me to access my archive of images that I've previously shared on our blog. So, I am at least able to share a flashback doodle. I don't know why it's letting me share archived blog photos but not new ones, but so be it, Blogger. I'll let you win this one, but I will win the next one.
Is anyone else having issues with images on Blogger? These issues are not consistent for me, but they have happened at least a couple of times since I've started using the new version of Blogger. I'm hoping that, like a few of the other kinks I noticed in the past, this gets updated and resolved soon.
Okay, I'll stop rambling and let you all have a dose of mancat. Today's main mancat is Toby. 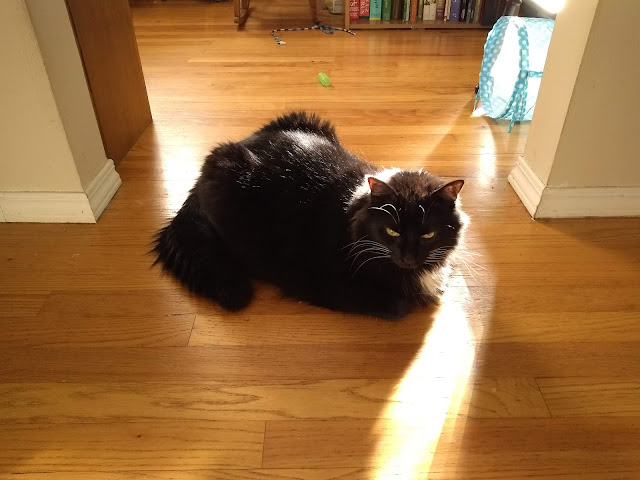 Toby found himself a nice sun puddle. Soon enough, though, a blurry mancat named Evan wanted to join in. 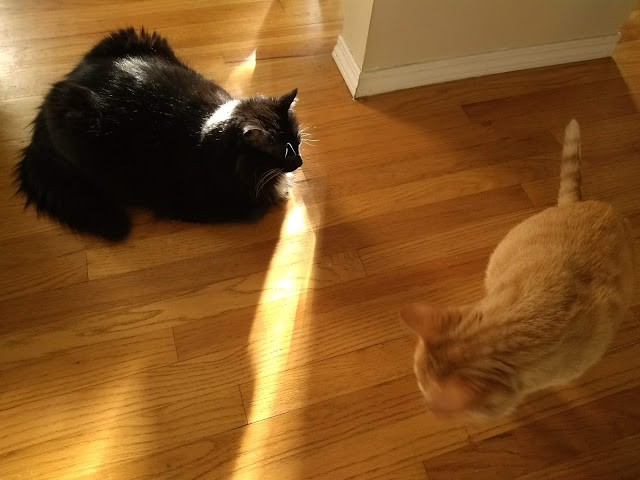 I always tell Evan that he blends into the hardwood in our house too much. He does not care. In fact, he seems to enjoy using it as camouflage.
Happy Monday to all!
***
Flashback Doodle of the Day
As I mentioned above, you're supposed to be getting a brand new doodle today. It even involves the summery, refreshing drink that is lemonade. But, Blogger has informed me that today is not a day to share new images. I will be trying to figure out how I can make these image issues stop, because I don't like Blogger telling me what to do. For now, though, here's a flashback doodle from last year. I've been doing a lot of reading and writing lately, so this flashback here seemed fitting. 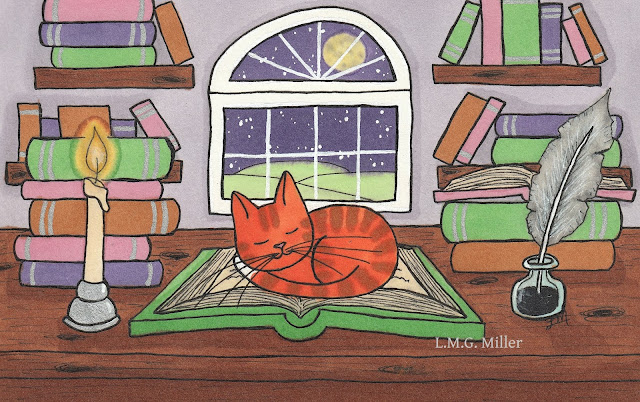 ***
Did you know?
Did you that male cats, especially intact ones, are believed to be called tomcats in large part because of an anonymous book called The Life and Adventures of a Cat? This book, said to have been published in 1760, was about a male cat named Tom. As the title suggests, this cat named Tom is all sorts of adventurous, and after this book became popular male cats regularly began being referred to as toms, or tomcats.
Posted by The Menagerie Mom at 9:51 AM

Toby and Evan are such cuties. Very nice drawing. And I did not know that about Tom cats.

I was using New Blogger, then I'm back in the old Blogger...not sure what I did. They'll probably kick me out soon enough.
I've always wondered what neutered males are called; intact males are known as Toms.

Hi Toby, what a cutie you are in that sunpuddle! Evan, that is a lovely photo bomb today - MOL!

Toby you are stunning!! Also that art looks like it could be a shabbat kitty! I love it!

Hi boyz!!! Love that doodle. No trouble with blogger...yet!

Nice picture of Toby & Evan together !

Toby, i hope you share nicely with Evan. (Yeah, right!)

And Blogger won't put the photos in the right order any more, if you have a specific order, you have to load one at a time (if they will load at all).