Happy Thursday! It's the day of the week when Angel Sammy is our poetic host of the Thoroughly Poetic Thursday challenge.

Our host always shares a photo prompt to guide our poetic endeavors. This week's photo prompt is this lovely image here: 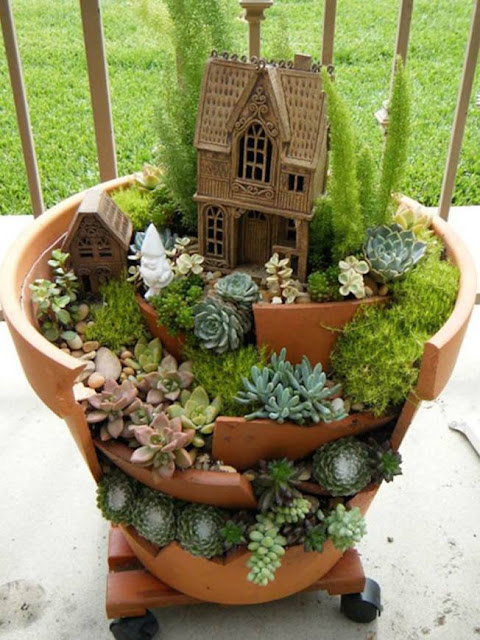 I really like this image. I've seen planters decorated in this manner, and I've heard about these increasingly popular fairy gardens, as I often hear them called. Though I'm far from a gardener, I've always thought it would be cute and quaint to have plants, preferably durable and self-sustaining plants, setup in a fairy garden similar to the one above. Anyway, long story short, I went with this general idea for my poem. If you'd like to read the silly little rhyme, here it is:

Tilly visited her grandmother's house every summer.
It was a quaint little home, far from a bummer.
Tilly especially loved her grandma's beautiful garden,
Filled with pots and plants in every nook, cranny, and margin.

The garden was bright and grand in the big back yard.
In it, Tilly loved playing with her grandma's cat and dog, Bert and Bart.
When Tilly arrived that particular summer, though,
Things were not all that normal, no.

The garden was still filled to the brim with colors and life,
But Bert and Bart's behavior caused a bit of strife.
"Why won't you two play with me?" Tilly asked the furry duo.
The cat and dog ignored her as they ran from rose bushes to purple junos.

Sighing, Tilly sat down and picked at the grass.
Without her furry friends keeping her company, she was a lonely lass.
Bert and Bart meowed, barked, dashed, and danced.
Toward them, her eyes could not help but glance.

Beside the stone walkway, Tilly's grandma had added some pots.
They were filled with the strangest little plants Tilly ever saw.
Amongst the peculiar display of plants in each pot also rested a tiny little house.
It was in front of these pots that Bert and Bart did now mew, woof, and shout.

Tilly stood, stomped a foot, and said, "Enough is enough."
As she approached, Bart wagged his tail, smiled, and chuffed.
Bert rubbed the girl's legs and gave her the sweetest of meows.
The cat and dog wiggled and wagged as Tilly glanced at odd plants and a tiny house.

What on earth has this cat and this dog's attention? Tilly wondered.
She examined pointy plants in all shades of green colors.
The tiny house nestled amongst the greenery was admittedly cute and quaint,
And it was also—whoa! what was that? wait!

Tilly jumped back, startled and confused.
Bert and Bart hopped and pawed at Tilly's legs, excited and amused.
Had a light just glowed in that tiny house? Tilly thought.
Was that movement in its tiny little window, or was it not?

The little lights dimmed just enough for Tilly to see something behind their veil.
What she saw was something she thought only existed in books and their tales.
Tilly's mind asked, Was that a tiny little woman?
And were those wings, or is my mind working in a way that it shouldn't?

The little lights twinkled and twirled as they dashed through the air.
They landed on Bart's smiling snout and they ruffled purring Bert's hair.
"Am I seeing fairies?" Tilly, eyes wide, this time loudly asked herself.
One of the little lights landed on her shoulder and said, "Well, we're certainly not elves." 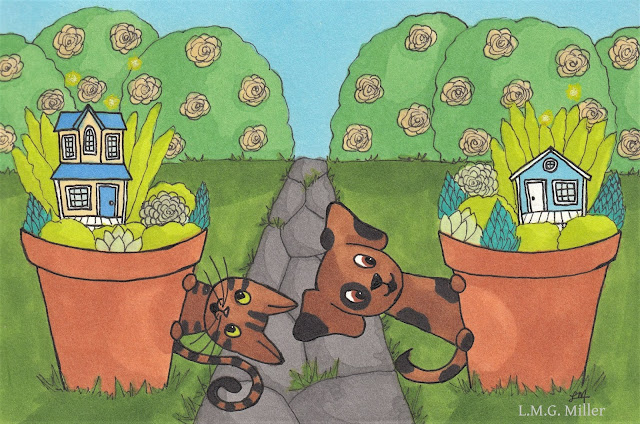 Now, how about we express some gratitude for Brian's Thankful Thursday Blog Hop?

As always, Thimble is here to give a bit of thanks. So, what is Thimble thankful for today? 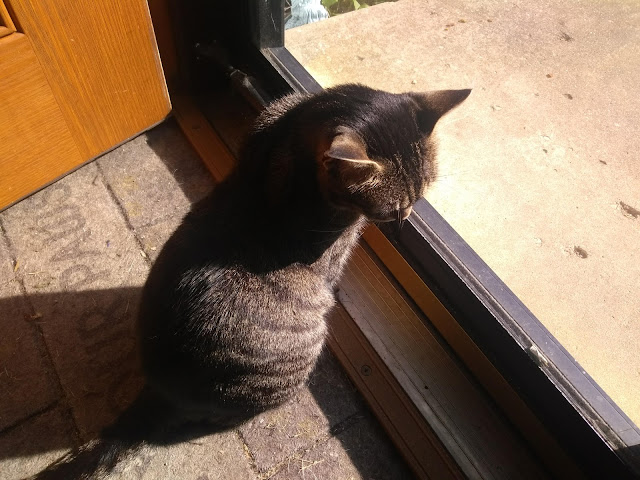 Yet again, Thimble is grateful for her the view out our front door. It's bright. It's sunny. It's warm. Oh, and it allows for snoopervision of the neighbors. Those neighbors need all shades of snoopervision, and so Thimble is very thankful that the front door allows her to keep a watchful eye on them.
***
Last but not least, we have for you the fill-in statements for tomorrow's Friendly Fill-Ins challenge. Ellen of 15andmeowing came up with the first two, and I came up with the second two.
1. _________ is a privilege.
2. I was so embarrassed when _________.
3. I can't help but smile when _________.
4. _________ has gotten out of hand.

We'll see you tomorrow, friends!
***
Did you know?
Yesterday we shared some trivia on the "puppy dog eyes" expression domesticated dogs have evolved to use on humans. Today, we're going to share a bit of trivia on how cats have evolved to interact with humans. Did you know that cats developed most of their meowing skills in order to better communicate with humans? Though kittens might communicate with their mothers by meowing, in the wild, mature cats largely communicate with each other using various forms of body language, scent, and vocalizations like hissing and caterwauling. Cats indeed most often reserve their meows for none other than us humans. Studies have even found that adult cats' meows have evolved over time to sound more pleasant and even more kitten-like. This is in no small part because those are the kinds of meows that get desirable responses from humans.
How about another bit of trivia related to meows? Some research has found that humans with more extensive experience with cats are able to identify the meaning of roughly 40% of meows even when given no visual or other cues aside from the sound of the meow itself. Cats sure have us trained well with their meows.
Posted by The Menagerie Mom at 1:39 AM

Love this wonderful story inspired by the Fairy Garden photo! I have long thought about creating one of these gardens - I'm sure that they are populated by magical fairies who hold fanciful parties at night when nobody sees! Your doodles that accompany the poem are perfect too. Thanks for being a poetic partner with us every week.......

Our kitties are happy they have lots of windows they can look out of because they are low enough to the ground or there is furniture nearby they can sit on to look out. Enjoy!

Wonderful poem, and I love the fairy garden. Thimble, enjoy your view and sunpuddle sweetie!

Such a terrific poem! Our Seal wonders if there are any fairie lights in the fairy garden. Thanks for joining our Thankful Thursday Blog Hop!

Delightful story/poem!
A lot of my neighbors have made fairy gardens at the base of the huge trees we all have between the sidewalk and street.
Humans train dogs, but cats train their humans...truth!

Cute doodles that fit that poem

So tell us, Thimble...what are the neighbors doing???

What are the neighbors up to, Thimble? Dish, girl! Adorable doodle and poem :) (I'm not a gardener either!)

Awwwww Tilly has new friends!! I love that poem and doodle! Thimble what do you see out there?

That was a great poem and adorable drawing. Thimble is a cutie, glad she is enjoying the view. Interesting info meows.