It's Thursday, and we're ready to rhyme. After all, Angel Sammy is courteous enough to host the Thoroughly Poetic Thursday challenge each week.

As always, our host shared a photo prompt to guide our poetic endeavors. This week's prompt is this lovely image here: 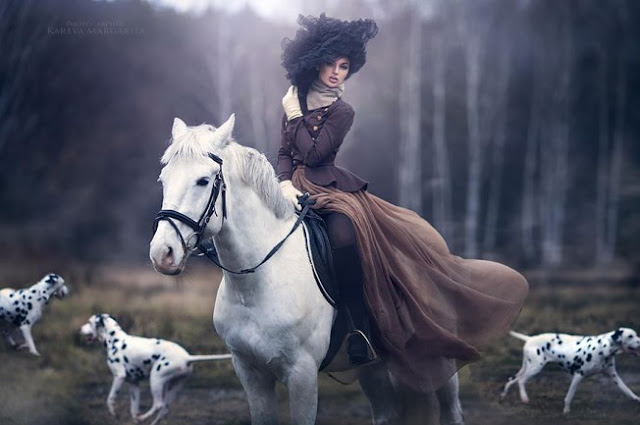 Truth be told, the first thing that came to my mind when I saw this image was a hunting scene or two from the show Downton Abbey. That then made me think of a parody I've seen mentioned more than once regarding that show's title, and that pun is Downton Tabby. I decided to go with that concept, and this was the silly result:
Downton Tabby
Evelyn would be joining the hunt.
Fresh air and a little competition she did want.
The event was being held at Downton this year,
Which happened to be Evelyn's home that she held quite dear.
Men and women arrived from lands all over,
Along with their faithful steeds and hunting dogs with names like Rover.
Evelyn greeted each and every one as they arrived,
Smiling, waving, and offering a polite, "Hi!"
Horses and dogs all around were ready to set off and run,
Which is perhaps what made Evelyn's hunting companion stick out like a sore thumb.
"Is that a cat?" one of the other hunters did ask.
Evelyn nodded as she gave her snoozing feline a pat.
Another hunter asked, "How are you supposed to hunt with a cat?"
"The same way you hunt with a dog," Evelyn said. "It's as simple as that."
All those nearby stared, smirked, and some even chuckled.
Evelyn smiled, gave her cat another pat, and under pressure did not buckle.
Before long, the hunt was about to begin.
The one to bring back the most hunting finds would win.
A countdown began after everyone took their place.
And just like that, the hunt was on like a race.
As all the other horseback hunters rode off with their dogs,
Evelyn placed a hand on her hunting companion's fur so soft.
She said, "Wake up, Champ, it's time to hunt."
The orange tabby cat yawned, stretched, and then he did run.
"Yeehaw, Reggie! Giddyup!" Evelyn said to her horse.
Evelyn tightened her grip on the reins and Reggie set off on his course.
Champ the orange tabby took the lead,
Followed closely by Reggie the white steed.
This way and that Champ zipped and zoomed.
It seemed like every second he was spotting more loot.
Soon enough, Evelyn's satchels were filled to the brim.
She simply could fit no more, lose or win.
Nevertheless, Champ still managed to find more and more on his hunt.
Evelyn started piling the trophies on her dress, both the back and the front.
Finally, Evelyn said, "Come now, Champ, let's head back home.
You've done a mighty fine job, and I simply can carry no more."
With that, Champ jumped onto Reggie's back,
Where he settled in for a post-hunting nap.
Evelyn balanced in the saddle on the way back to Downton.
Her hunting loot wobbled, but she miraculously managed to drop not one.
The hunting event's judges greeted Evelyn with bugged-out eyes.
They said, "Look at all these. Whoa. My goodness. Oh my!"
Evelyn was the first hunter to return to Downton,
And so she, Champ, and Reggie took the time to relax in the sun.
One by one, the other hunters returned from the woods.
Downton was now bustling with men and women boasting about their goods.
The judges tallied each hunter's loot.
When it came time for the announcement, there were hollers and hoots.
A judge wearing a top hat and tie called out,
"Silence, please, so that my poor voice need not shout.
You all performed quite well in this year's Mushroom Hunting Extravaganza,
But one of you brought in mold and fungus that was both numerous and handsome."
There was much murmuring in the air.
The judge continued, "Should we announce the winner? Should we dare?
Right, yes, let's do just that.
The winner is Evelyn of Downton, and her, um, cat!"
From the crowd there were groans and gasps,
As well as quite a few laughs and claps.
The hunter nearest Evelyn said, "I thought a cat's hunting skills were a bit lacking.
I guess I've been proven wrong by your Downton tabby." 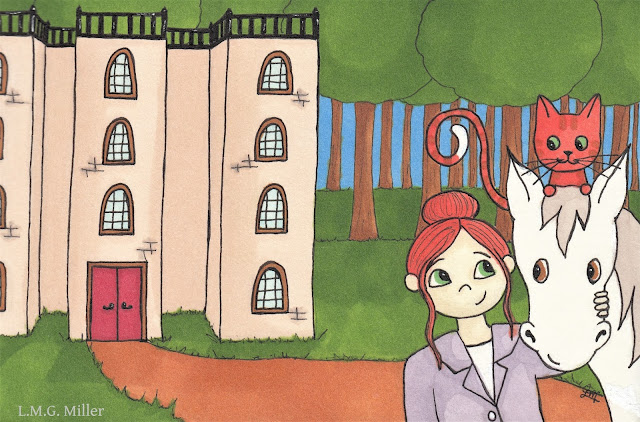 ***
Thursday is a great day to give thanks, especially thanks to Brian's Thankful Thursday Blog Hop.

As always, Thimble is here to express her gratitude. Do you know what Thimble is thankful for today? 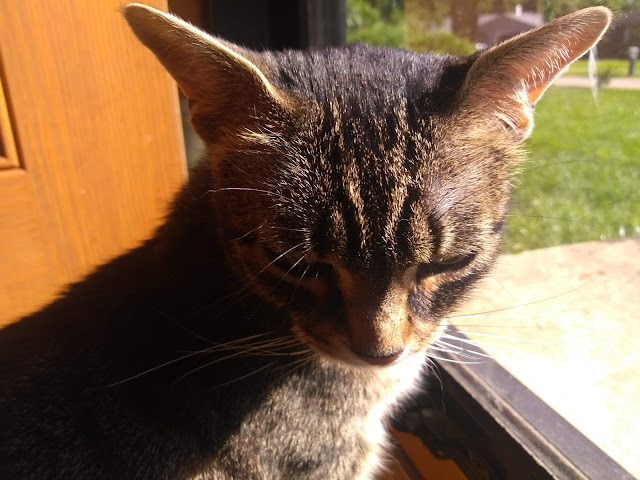 We'll see you tomorrow, friends!
***
Did you know?
Did you know that some dogs have been bred to hunt mushrooms? The Italian dog breed called the Lagotto Romagnolo has historically been bred and trained to hunt truffles, which are actually not true mushrooms since they grow underground. Regardless, there are dogs that have been bred to hunt truffles, morels, and other mushrooms. In theory, any variety of dog, or even other animals, could potentially be trained to recognize and find the scent of certain mushrooms, and some dogs and other animals have indeed been trained to do so. Talk about taking mushroom hunting to the extreme.
Posted by The Menagerie Mom at 6:51 AM

Delightful poem/story!
I certainly was glad that that what was being hunted was mushrooms!
Dumbo ears?!? (just kidding!)

Thimble, you look so great in the sunshine photo. We love the Downtown Tabby poem. It's always great seeing your cute doodles. Thanks for the share. Have a great rest of your day.
World of Animals

Thimble, you're just too adorbs! Do you have the book Downton Tabby?

We love loved your Downtown Tabby poem! A+!

That's a GREAT story poem for the photo this week - I remember Downton Tabby - it was so hilarious. This story isn't hilarious though - it's wonderful and we appreciate that you play poetry with us every week!!!

Such a fun story poem! Yes, i think a hunting cat could beat a hunting dog, if it wanted. The trick is to make it want to.

Thanks for showing off your ears, Thimble!

I love your poem and drawing. I did not know about gods that an find mushrooms. I found morels a few months ago right in my yard.