Caturday at the Bakery

I recently saw an artsy image of a whimsical little bakery. That inspired me to create a similar image, but in my own sort of style, and of course starring cats. One thing led to another, and this happened: 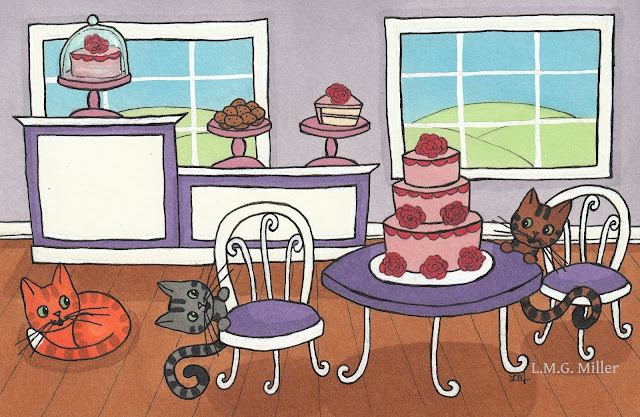 Of course, those kitties and their sugary sweets are our contribution to Athena's Caturday Art Blog Hop. Don't forget to visit Athena to see all of the masterpieces our friends have created!


***
Did you know?
Did you know that the Louisville, KY, cat café known as Purrfect Day Cat Café aided in the adoption of 357 cats in just 3 months after opening its doors in 2018? This cat café formed a partnership with the Kentucky Humane Society, and its goal was to adopt out 300 cats in its first year. It certainly achieved that, with the aforementioned 357 cats it helped adopt out in a mere 3 months. The café also donated $8,200 to the Kentucky Humane Society.

Cat cafés originated in Japan, but in recent years they have been gaining increasing popularity in the United States, and worldwide. These cat cafés often partner with local shelters or rescues, bringing in adoptable cats who would do well interacting with humans in search of coffee and feline companionship. This can lead to wonderfully happy endings for adoptable felines, as Louisville's Purrfect Day Cat Café and others have proven.
Posted by The Menagerie Mom at 12:03 AM

The cake looks very tempting to those kitties.

Oh my! Everything looks quite yummy in that little bakery and I'm wondering, if it's run by kitties is there nip in everything????

That is a wonderful thing that the Purrfect Day Cat Cafe accomplished! Your drawing is very sweet with those little cat faces!

What a great drawing. It is so cute all the kitties and cakes. You all have a super duper day.

Great graphic...as always! We hope you guys will want to be in our Patriotic Show! Just visit us for details! Your artwork is so cute, its just gotta be there!

If there were pretty baked and iced goods in our house, Da Boyz would have their paws touching everything! I love cat cafes!

The idea of a cat cafe is very appealing, and yours looks scrumptious.

Beautiful art! You are so creative :)

We hope that cake has some catnip in it!

Very cute drawing. I am glad that cat cafe has helped so many kitties get adopted.

Oh this is fabulous. Hope there's some mud pie for sale!

That looks like our local pastry shoppe. I'm gonna have to check it out. Cool doodle.