It's Sunday, it's sunny, and we're taking it easy over here. To demonstrate all of that, Thimble snapped this selfie right here: 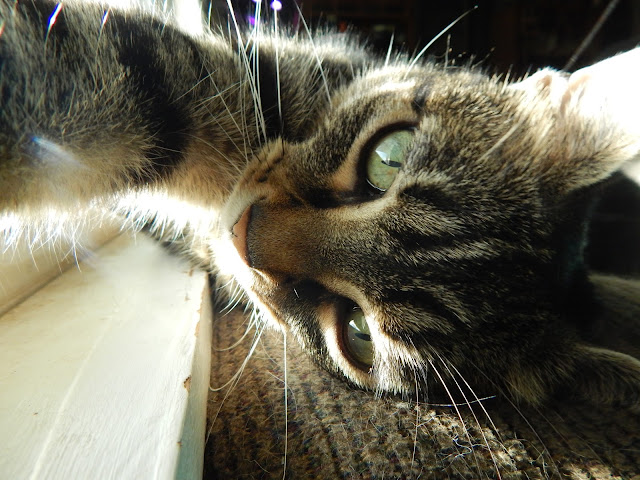 Thimble didn't think you all would mind if she just stayed lying down for this selfie. After all, she was chilling on the couch, basking in her sun puddle, and simply couldn't be bothered to sit up. So, this is the selfie that resulted.

We hope you're all having as sunny and stupendous of a Sunday as we are!

This is your forewarning that today's doodle is extra weird and random, sort of Halloween-ish in the off-season, but also maybe not. There is a reason behind this doodle. Long story short, I created it as part of a challenge going on in a small group of writers I know online. This isn't the last of the doodles I scribbled up for this challenge, either. So, for the next few days, our doodles are probably going to make no sense at all, but that's because they're silliness I scribbled up for this random challenge I decided to participate in at the last minute. You have been forewarned. 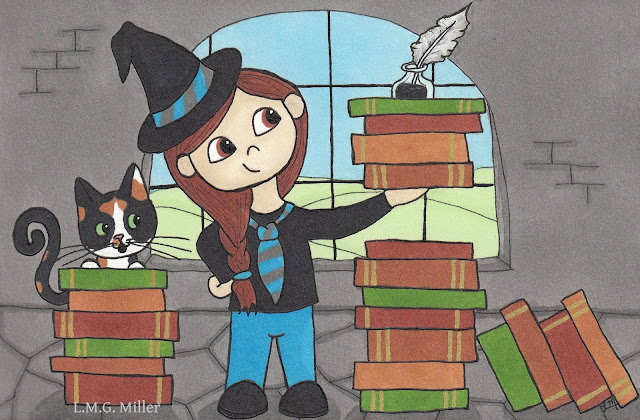 ***
Did you know?
Did you know that it's believed many cats have a dominant paw, just like humans have a dominant hand? Further studies even resulted in the theory that female cats are more often right-pawed, and male cats are more often left-pawed. Then again, some cats also display ambidexterity, or no dominant paw preference. You can try to test this out with your own cat by watching which paw they most often use when batting at an item, or when dipping their paw in a drink.
Posted by The Menagerie Mom at 12:03 AM

Oh yes - a lying down selfie is the bestest kind! Love the doodle too......

Thimble, that's what we call taking a selfie while getting your easy on. Nothing wrong with that!

Thimble, we love your easy like Sunday selfie, pretty girl. :)

That's a great doodle -- there's nothing wrong with a bit of random cuteness!

Thimble, that is the perfect Easy Sunday selfie! I like that random doodle, little witches and cats are always fun. I didn't know about the right-paw left-paw thing, I'll have to pay more attention to see who has what in our house. Thanks,

Thimble is a cutie. And I love the drawing. My KaChoo was left pawed like me :) XO

Well done Thimble. Great picture. You all have a great week.

Thimble, i'm glad you were resting for your selfie, it is important to get enough rest.

Sometimes i think all cats are ambidextrous and just pretend to be one or the other to keep us confused.