Happy Thursday to one and all! As always, we'll kick off this post with a rhyme. It is, after all, the day of Angel Sammy's Thoroughly Poetic Thursday challenge.

As always, our host gave us a photo prompt to help us get poetic. This week, that photo was this action-packed one here:

I'll be completely honest and say that I started with the above image in mind, but ended up with a poem that will probably seem completely and totally unrelated to said photo prompt. That there photo reminded me of how much roller coasters scare the living daylights out of me, and how the couple times I've been to amusement parks, I've primarily stuck to the far more low-key rides. I prefer rides like, I don't know, trolleys. Then, of course, that got me thinking about trolleys, and the classic double-decker buses, and all that good stuff. And so then there was this:


There once was a girl named Maisie,
Who had a little black and brown kitty named Daisy.
Daisy was cute and cuddly and quiet as a mouse,
Which was why Maisie didn't even notice her sneak right out of the house.

It happened when Maisie stepped out for the mail,
And Daisy waltzed through the open door with a strut and tall tail.
She was, in truth, a curious cat,
And there really wasn't much more to it than that.

Actually, there was one particular reason for Daisy's escape,
And that was what she witnessed day after day.
Each day she watched Maisie leave the house and stand not far away,
No matter if the day was sunny or gray.
Maisie would simply stand outside at the side of the road,
Until a big, tall, red thing approached and slowed.

Apparently, Daisy had heard, they lived on a bus route.
Daisy was curious what that was all about,
And so she had snuck out of the house to see for herself.
Like Maisie so often did, Daisy pranced over to the corner of Kerf and Kelf.

Daisy sat and waited with the utmost patience.
Before long, it was that big, tall, red thing she was facing.
The door on it swung open right in front of her face,
And she jumped and ran onto the bus as if in a race.

The seats on the rig were actually quite nice,
Though Daisy did hope they wouldn't give her any lice.
Daisy could not deny that it was a bit of a bumpy ride,
But she quite enjoyed watching the scenery that went by outside.

Daisy was unsure how long her ride had been,
When she suddenly saw something that made her jump and spin.
The bus approached a sign that showcased an orange cat.
It was huge and striped and would you look at that!

Daisy ran to the front of the bus,
Because that sign made her want to know what was up.
The red door on the red rig flew open yet again,
And Daisy reached the sign in seconds that numbered less than ten.

Daisy vaguely took note that the bus then drove away,
But she didn't mind, because at least for a while, here she would stay.
The sign with the big orange cat read, "Zoo".
About such a thing Daisy knew a thing or two.

She pranced into the building behind the sign,
And found herself at the back of a mighty long line.
Daisy didn't believe in cheating,
But she simply couldn't help but gain entrance with a bit of sneaking.

She soon found herself meeting all sorts of new friends,
Starting with a tortoise whose name, it would seem, was Fred.
She also met many a new friend who flew and soared,
As well as plenty who grumbled and roared,
And even a few who did nothing but snore.

After hours it was to a little shop she was steered.
Above the doors was the word, "Souvenirs".
Inside were a great many things that looked shiny and fun,
And Daisy picked out more than just one.

Back outside, Daisy sat herself where she'd last seen the red bus,
And before long yet another one pulled right on up.
Daisy intended to head straight home,
But along the way she saw other sights she wished to roam.

Daisy had not a single idea how long she had been gone,
But when she returned home it was the next day's dawn.
Maisie was sitting on the steps outside the front door,
Looking sad, tearful, and quite forlorn.
When the girl looked up and saw Daisy,
She ran directly to her in a manner quite hasty.

"Where on earth have you been?"
As she hugged Daisy, that's all Maisie said.
Daisy had certainly not meant to make Maisie worry,
But she could make up for it, and in a hurry.

Daisy dashed over to a bag sitting nearby.
Maisie asked, "What do you have there? And why?"
Daisy began pulling things out of the bag into which Maisie peered.
What were these things called? Oh, yes, "souvenirs".

Daisy dropped a hat with a striped cat at Maisie's feet,
And she knew the girl would find it really quite neat.
Next she gave Maisie a keychain and a pencil,
Both of which showcased a bird Daisy had found really quite shrill.

Daisy also happened to have for the girl a book from the library.
After all, the zoo hadn't been the last place she had tarried.
Oh, and Daisy also had for Maisie a chocolate chip cookie,
Which she had of course nabbed from the girl's most favorite bakery.

"My goodness, Daisy," Maisie said with a laugh.
"What have you been up to, my mischievous little cat?"
Daisy's only answer was a small little, "Mew,"
Before she pranced inside for an overdue snooze. 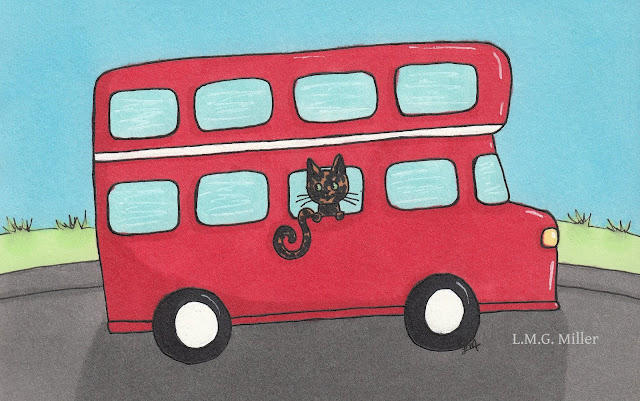 We wouldn't let this Thursday go by without also giving you your Thimble fix, and sharing Thimble's Thankfuls. Though the lighting isn't all that ideal, Thimble wanted to show you all how grateful she is for sun puddles. 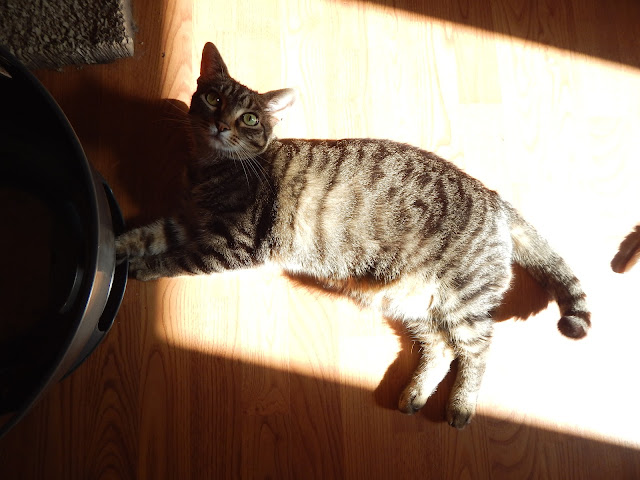 In case you can't tell, Thimble is also showing you all how thankful she is for her Jackson Galaxy Space Station toy. All the kitties around here love playing with it and are so very grateful for it. Of course, the fact that there are six cats and one of these toys means that we sure do have us some battles royale around here. 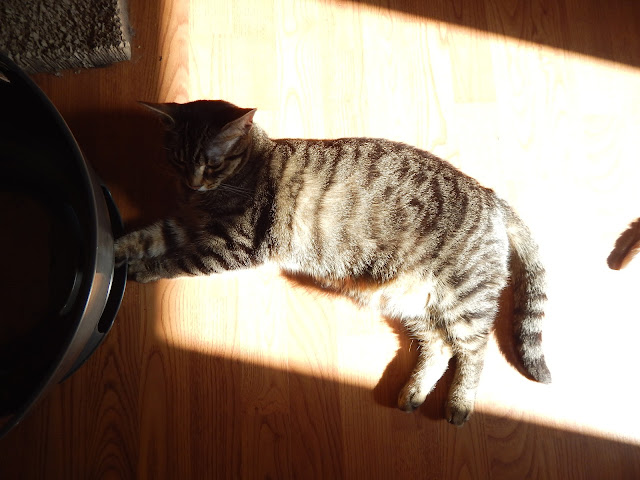 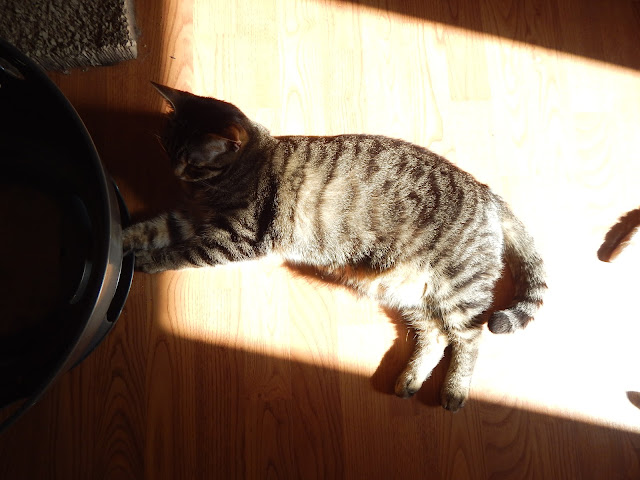 There you have it. For today's Thankful Thursday Blog Hop, hosted by Brian of Brian's Home, Thimble is extremely grateful for her sunshine and entertaining toys.

As always, all of us here are also extremely grateful for friends like all of you!

Did you know?
Did you know that Guinness World Records no longer includes a category for fattest cats and fattest dogs? Due to the health risks of overweight animals, they did not want to encourage pet owners to overfeed their cats and dogs, or other pets, just so that they could win a record spot. This category does still exist for humans, though.
Posted by The Menagerie Mom at 5:34 AM

Daisy was a confident kitty, and gifts for her person was a good way to apologize for scaring Maisie! Great story/poem.
I've tried to enjoy roller coasters, but nope, I'd rather get my thrills by enjoying beautiful artwork, or searching through library shelves. Plus, I have no depth perception AND a dodgy inner-ear that makes me seasick easily, so I'd best stay where my two flat feet are on the ground.
Thimble is adorbs, as always!

Great job with the story-poem for the photo this week. I quite like Daisy's version of a good time vs. spending time on a mad roller coaster that's for sure. Thanks for adding so much FUN to the weekly poetic endeavor Angel Sammy hosts!

That was a cute poem and drawing. It reminds me of a book I read about Casper the Commuting Cat in England. That does look like a fun toy- and I know all about kitties fighting for something. I am glad there is no longer a fattest cat or dog category- they should get rid of the human one too. I look forward to your fill-ins. XO

Daisy might want to leave a note next time! She's beautiful in her bus.

That was smart of Guinness.

As a total Anglophile, that tortie in a double decker bus really got me!!! I'm all about low-key rides too. I've tried a few riskier ones and lived to regret it.

I need to find one of those toys. I have some Jackson Galaxy tumbling balls but this looks amazing.