Welcome to another Friday, friends! We'll get right to the Friendly Fill-Ins challenge. In case you missed the fill-in statements yesterday, I'll share them again below. Ellen of 15andmeowing came up with the first two, and I came up with the second two.


And below is how I filled these in. My answers are in bold.


1. I hope Target never goes out of business.
(I just really like Target, if I'm being simple and honest. What's more, though, Target often offers exclusive cat toys, cat scratchers, and other cat-centric goodies, especially around my favorite holidays of Halloween and Christmas. One of the first things I do during both of those holiday seasons is visit Target and stock up on things that I don't need but that I really want. Oh, and the dollar spot at Target is one of my favorite places to be.)

2. So far, the highlight of my year has been the inexplicable decrease in my mancat Evan's incontinence.
(Evan's urinary incontinence never angered me. It was simply part of his hind limb paralyzed self. That being said, I was pleasantly surprised when it recently started happening much, much, much less frequently. Evan started having incontinence on nearly a daily basis last year. With all ailments ruled out, it was simply deemed a side effect of his hind limb paralysis. Understandably, I was told he would probably have it for the rest of his life. Just this spring, though, Evan's incontinence suddenly and quite inexplicably started happening far less often. Before, he'd have incontinence anywhere from once to a dozen times per day. Now, though, he might go weeks without having even a single instance of it. Now, hopefully typing that out for all of the internet to read won't bring about a return of my boy's urinary battles.)

3. Worrying takes up too much time.
(Though anxiety and worry does not affect me as much these days as it did when I was younger, it certainly still exists in my life. That being said, I know that when I worry, especially about things that I can't control, I'm simply wasting time. I've shared this before, but one of my favorite quotes is from a character in the movie Fantastic Beasts and Where to Find Them. In this particular movie, the character says, "My philosophy is that worrying means you suffer twice." Who has the time to suffer twice, let alone once? I need to take my own advice, though, and stop wasting time worrying about things beyond my control.)

4. If I didn't have to sleep, I would spend that extra time reading and writing.
(I honestly would love to use necessary yet valuable sleeping time to do more of what I love doing, but that I often don't get to do as often as I'd like. I'll be the first to admit that my full-time day job takes me away from home and my hobbies far more than I'd like, so I would definitely appreciate being able to use my sleepy time to pursue my hobbies and passions. This would indeed involve reading and writing. It would also involve drawing, blogging, some baking and cooking here and there, and of course snuggling all of the furbabies.)

Your Eddy fix today is a bit of a flashback. 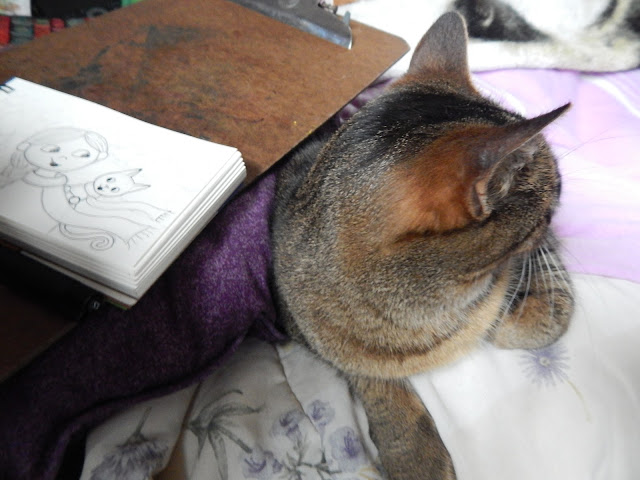 What you're seeing there is photo evidence of Eddy telling me I'm not allowed to draw in my sketchbook. I'm supposed to focus solely on her. Obviously. 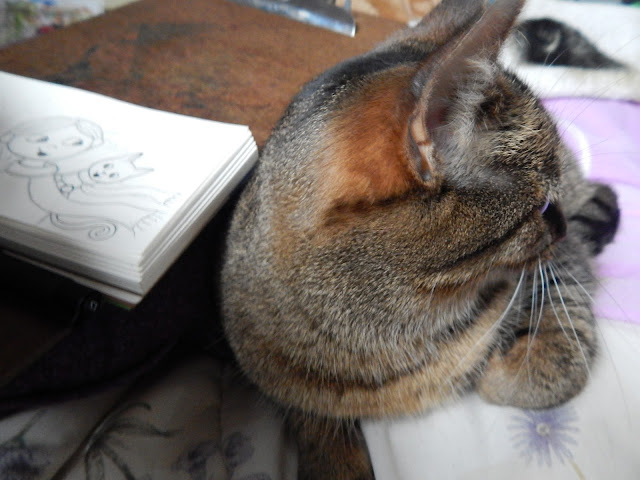 That's a winter doodle I was working on in those photos, because these shots were taken this past winter. I was going through my photos recently and noticed that I'm pretty sure I never shared these. During the winter months, I love to bundle up beneath loads of blankets when I doodle away in my sketchbook. This always prompts Eddy to come over and steal my blankets, steal my body warmth, and steal my art supplies. As always, whatever Eddy wants, Eddy gets.

Doodle of the Day: 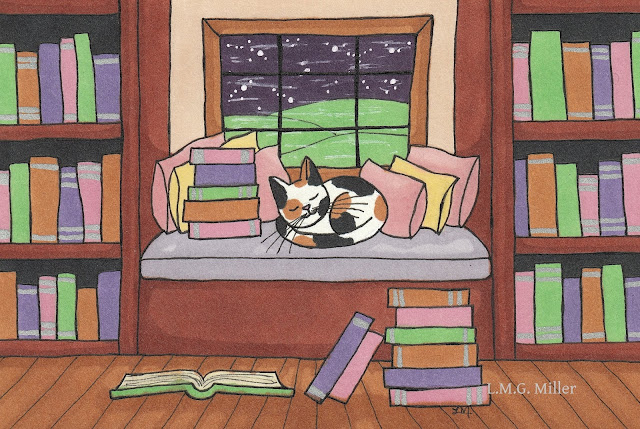 Did you know?
Did you know roughly 30-50% of cats lack the gene that would cause them to react to catnip? Indeed, anywhere from one-third to one-half of cats don't, or can't, react to catnip. It's also worth noting that even if a cat does have the aforementioned catnip gene, it won't come into full effect until roughly 3 to 6 months of age. Therefore, if you give catnip to a kitten younger than this, they will likely not react, whether or not they possess the gene for catnip reactivity.
Posted by The Menagerie Mom at 5:16 AM

Nice shots of Eddy AND your doodles! As for the "DID YOU KNOW" we did know because Angel Sammy reacted not one bit to catnip - he "sort of" did with silvervine though but only a tiny bit. Teddy is the same.....very little reaction at least compared with other cats we know! Teddy has a mind of his own about EVERYTHING including nip!

Your doodles are so adorable. :)

My MIL used to worry, worry, worry all the time. It was almost comical but I get it being a mom. Just because your kids grow up doesn't mean you worry about them any less. It just changes. I decided long ago the things out of my hands I have to trust that God will deal with the situation and when the ball is in my court then I pray for God to help me make the changes necessary. Worry robs you of your sleep and sanity. Have a furrtastic weekend and thanks for hosting the Friday fun! ;)

Meowser Ms. Lorianne! I've finally figured out where blogspot hides your comments!
Thank you for hosting this hop. Mom likes Target, too. She purrticularly likes to order online, so they have whatever she likes ready for picup ... it saves time and money (she says impulse buys).
Purrseidon

Especially with cats, we just never know what or why things happen, but if Evan is doing 'better', than that's great! The Hubby points out anytime I say something that he thinks will be a jinx. But worry comes along and I express it!

You're right about the worry part.

Lots of folks would spend their time reading. Reading is a passion of mine.

You are so right about #3!
And it sounds you wouldn't mind having more time on your hands, that's a good thing.
Have a wonderful weekend!

All but one of our seven cats are nip reactors, and that one does like to eat it, even if she doesn’t react to it much at all.

You are so right about worry getting you nothing. It’s like sitting in the rocking chair, you move but get noplace.

Great fill-in answers! I love Target too for the very same reasons. I like that quote about worrying, it is so accurate. I used to worry constantly and I still worry a lot, but I have an anti-anxiety medicine that helps. Sleep does take up too much time when we could do more fun things. Cute drawing and beautiful shots of Eddy. I am happy about Evan too. I know Tallulah was incontinent at the end and it was not fun. I have some cats not into nip like Brody and Trouble. Have a wonderful weekend! XO

TW has never been in a Target. We just found out we have one on the way to the big box store. She's been in IKEA once though. MOL. When you don't have a car, you don't go places.

We think Eddy's right! We love Target too - one of the few store we frequent.