Caturday Art for My Angels

I thought I just had a couple of final touches to add to our Caturday Art doodle yesterday, but it turns out one of those final touches requires a marker color that I didn't realize I was out of. I'm usually pretty good at keeping inventory of my markers and knowing which ones are running low on ink, but that wasn't the case this time around. I've been experimenting with some different colors I thought I could use instead, but it turns out I'm set on the color I originally planned on and so now have to wait for it to arrive from my favorite art store. There's a reason I'm set on the color I have in mind for this particular doodle, and I'll explain when we share it. It's going to be a silly doodle, it stars one of my parents' goofy little felines, and by the time the necessary marker arrives this doodle will probably end up being our contribution to next weekend's Caturday Art Blog Hop. It's supposed to be a final farewell to summer, so I wasn't planing on sharing it in September. But, since our temperatures are still warm, the summer vibe will probably still apply next weekend.
Anyway. Since I already have the rest of this week's new doodles as well as flashback doodles all planned out, I won't use any of those for today. Instead, I have decided to find another flashback doodle to share. This one is from 2018, so it hasn't starred on our blog in 2 years. I went for one that stars my angel Rosie and her angel brother Sammy. After all, their birthday is coming up on Tuesday, so it only seems right they get some extra time on our blog. Back when I created this doodle in 2018, I was honoring the fact that my angels Rosie and Sammy always helped me with my homework when I was a kid. That often meant they sat on my textbooks and notebooks, but so be it. 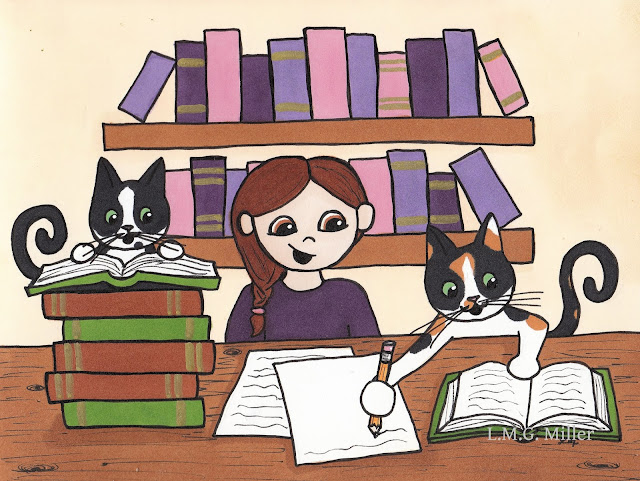 I wonder if any of the children doing remote learning these days get help like this? I hope so.
Happy Caturday to all!

***
Did you know?
Did you know that studies have been performed on how animals in classrooms can benefit children? It's become more commonly known that animals can indeed help children feel comforted and more confident, overall helping children with their emotional needs as well as their communication skills. Studies on animals in classrooms have resulted in even more specific findings, though. For example, it has been observed that having an animal in the classroom can help children focus and follow instructions, ask relevant questions, and interact with their teacher more. In some studies, it was overall found that less emotional distress and outbursts occurred in children when an animal was in the classroom. There is of course the concern that some children might become distracted by an animal in the classroom, but once the novelty of it wears off, studies have shown that children can greatly benefit from having a furry friend present as they learn in the classroom.
Posted by The Menagerie Mom at 11:08 AM

That is a cute drawing. Such a sweet memory of them helping you with homework. I wish I had a cat growing up, but I am making up for it now :)

What beautiful art and memories

Such a lovely memory and doodle. I love that Rosie and Sammy helped you with your homework!

Fun drawing of your kitties.

What a special doodle!

I can't think of a better learning companion for kids!

I grew up in a large family, and I needed to find quiet places to be, to get away from the commotion. A cat or two would have been purrfect companions for me back then, but I have them now...woohoo!

We LOVE the flashback doodle, Yes, our cats Kitty, Sylvester and Tiki used to "help" me do my homework in much the same way!
EXCELLENT Art and thanks for the memories!
Purrs
Marv, Jo Jo, Kozmo, Cinnamon and Angel Nellie

The kids were out of school by the time the youngsters game to live here.

That's a cute doodle. School and homework is appropriate for this time of year too.

I bet my momma woulda liked school more if she had kitties as her "classmates."

Mummy wishes she had had a kitty when She was at school.