As always, our host shared a photo prompt to help get our creative juices flowing. This week's prompt is this nostalgic image here: 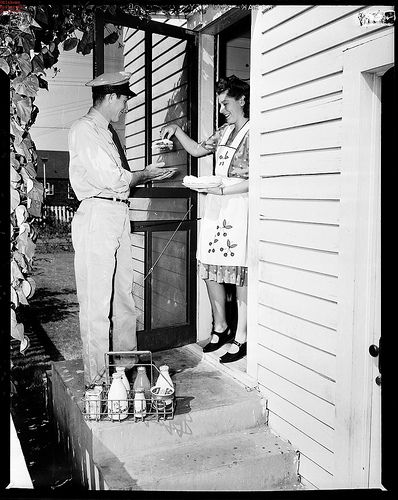 For this one, I honestly just looked at the image and started writing. I didn't really know where I was going to end up with my poem, but I ended up here:

Nancy enjoyed milk in all sorts of forms.
She drank it with cereal or plain, cold or warm.
Every day, Nancy awaited the delivery of her milk,
Brought by the friendly and kind milkman named Bill.

The only problem was that sometimes someone else reached the milk first.
Nancy would go outside only to find there was no milk left to quench her thirst.
Instead, the lids of her milk bottles would be here, there, and everywhere,
With the bottles themselves empty of everything but the morning sun's glare.
Sometimes a puddle of milk might be left on the ground,
But drinking that was an idea Nancy found quite unsound.

"Who is stealing and spilling my milk?" Nancy asked aloud one day.
After all, she had just found her milk bottles empty and in complete disarray.
There they lie scattered all over the front walk,
Empty and dryer than a piece of sidewalk chalk.

Taking the empty bottles inside and preparing herself for a milkless day,
Nancy decided she would find the culprit in some sort of way.
In the end, she realized she would simply have to play the part of a spy.
She would await tomorrow's delivery with a keen and watchful eye.

And so, Nancy woke up at the break of day.
She knew Bill the milkman always started his route without delay.
And so she parked herself right beside the window,
Where she watched, quiet and stooped low.

Before long, Bill arrived with the milk as he whistled a tune.
Sitting right there and not saying hello made Nancy feel really quite rude.
She was on a big, grand mission, though.
The identity of her milk thief she would soon know.

Nancy waited and watched and waited and watched.
She could hear the arms ticking and moving on her clock.
Nancy eagerly jumped when something moved in the bushes outside,
But it turned out just to be a bright orange cat with stripes.

Sighing, Nancy continued to spy out the front window.
Would the culprit sneak up on their tiptoes?
Was the spiller and thief of her milk a neighbor she knew?
Nancy would continue her watch to find out, even if it took until noon.

Nancy did not have to wait long, though.
In fact, she had already caught sight of her culprit, she just hadn't known.
Indeed, it was the orange cat from the bushes who tiptoed up to the milk.
He approached the bottles, moving as soft and quiet as silk.

Just like that, the cat began knocking the milk bottles to the ground.
Then, he began lapping up all the milk he had found.
Nancy could not help but laugh at the sight.
Was a cat really the first culprit she'd caught as a spy?

Still at the window, Nancy then took a closer look.
The poor cat, she finally thought, looked like a sad little crook.
He was skinny and looked like he might enjoy a much more well-rounded meal.
Now frowning, Nancy went to the kitchen and grabbed some tuna and a cheese wheel.

She cracked the front door open and sat down just outside.
Then she said hello to the cat in a voice quieter than even a sigh.
The cat jumped, but then put its nose in the air.
It approached the scent of tuna with a great deal of care.
The orange feline stepped on the porch with Nancy only after a full investigation,
And then quite some time later finally began eating the tuna and cheese with hesitation.

Nancy sat as still as a statue while the cat ate.
She spoke to it only after it had finished its plate.
"You're just skin and bones," she said to the cat.
"You must not have a family, not when you look like that."

Then Nancy said to the cat, "Would you like to come inside?
You can nap on the couch, or you're free to hide."
With another serving of tuna as a bribe,
Slowly but surely, Nancy lured the skinny kitty inside.
And so, after that day, Nancy had a cat.
She also had milk again after that,
Milk that of course she shared with her new orange cat. 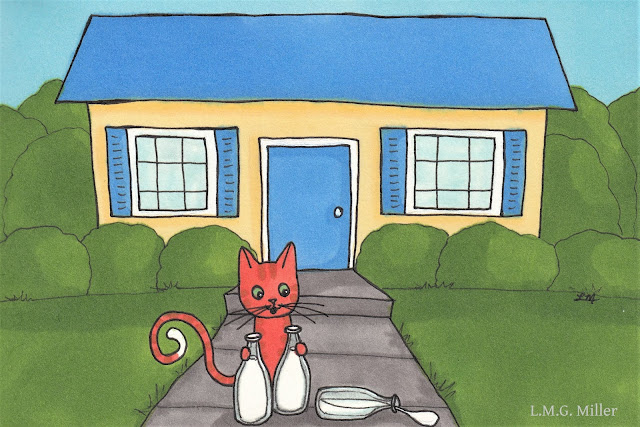 ***
Next up, how about we share some gratitude for Brian's Thankful Thursday Blog Hop?

What is Thimble thankful for today? 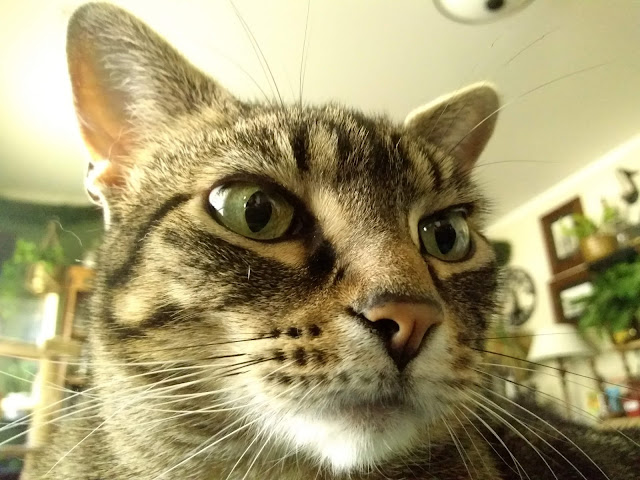 We'll see you tomorrow, friends!
***
Tip of the Day
To go along with our poem today, we're going to share a tip we've already shared before. It's relevant and a potentially important message, though, so here goes. Let's talk about dairy. Not all furbabies are intolerant to dairy, but some indeed are. This is because, just as in some humans, some cats and dogs lack sufficient lactase, the enzyme responsible for breaking down lactose, the sugar found in dairy. If a lactose intolerant kitty or pup consumes dairy, they may display symptoms such as diarrhea and vomiting.
Keeping the above in mind, especially if giving dairy to a kitty or pup for the first time, don't offer much, and keep an eye on your furbaby for a few hours to monitor if gastrointestinal issues arise. Obviously, if there is any vomiting or diarrhea, do not give any more dairy. On the other hand, if no symptoms arise within 12 hours or so, that particular furbaby may not be lactose intolerant. It also might be worth noting that certain forms of dairy contain less lactose and therefore have less likelihood of causing symptoms of lactose intolerance. Forms of dairy low in lactose include hard cheeses, yogurt, and other cultured dairy products. All in all, though, if your kitty or pup is lactose intolerant, simply avoid feeding diary in order to prevent unnecessary gastrointestinal symptoms. Even if your furbaby is not lactose intolerant, it's still wise to feed human foods only in moderation, or not at all.
Posted by The Menagerie Mom at 6:14 AM

Congratulations on your A+ sweet Thimble!

Another adorable poem/story!
Thimble, glad you are okay.

YAY Thimble! I'm so happy for you. And of course a kitty belongs in a poem with a milkman!!!

Congratulations to Thimble on a clean bill of health!

That was a great poem. I had a feeling it was a kitty stealing the milk :) I like the drawing too. And excellent tips, as always.

I remember Milkmen, they were so useful. We need them now more than ever!

We still have a milkman. Heeheehee! He has been a real lifesaver in this chaotic times and often brings extras and help me not have to visit the grocery store.DO you think the kitty was stealing the milk? Hmmmm....... Wonderful post and great questions for the Fill Ins. Thank you and HUGS across the miles XO

Ooh, did te orange cat come inside to stay
On some cold milkless day?
When all the inside warmth...

Love all your fill-ins, especially #4. I used to do that too. It's a good thing.

Fabulous - I don't know how you do it - incredible adventures in every poem/story every single week. You are amazing. I'm glad the orange kitty found his forever home (and milk!).