As always, our host shared a photo prompt to help inspire our poems. This week's prompt is this lovely image here: 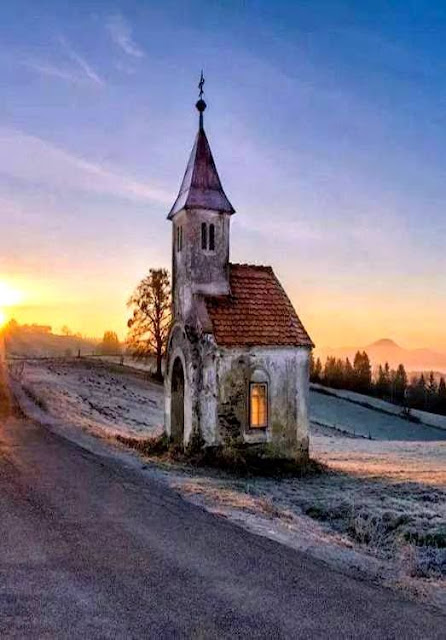 Though that photo is actually quite pretty, for some reason that little chapel made me think of the setting of some H.P. Lovecraft stories I've ready. I don't know why, because Lovecraft wrote horror and macabre tales, not tales of pretty chapels. I guess I've just been in such a mood for autumn and Halloween that everything brings that to my mind. So, I went ahead with that sort of concept for my poem. Sort of.

The chapel at the edge of town was said to be haunted.
The sight of it made most townsfolk feel quite daunted.
There were times when some folk would even run away screaming,
Especially when from inside the chapel spooky sounds and shadows began streaming.

As for young Mikey Howard,
He refused to be seen as a coward.
He never backed down from a challenge,
And so to the chapel he decided to make passage.

Mikey snuck out his bedroom window on one moonlit night,
Certain that nothing ahead of him would make him feel fright.
No ghost or goblin could scare that brave boy.
Rather, proving his courage would bring him great joy.

The full moon lit the way as Mikey walked through town.
Crickets were the only things out and about making sound.
He drew the attention of his friends Jimmy and Johnny as he passed by their house.
What was the point of proving his bravery with an audience of only a chapel mouse?

Jimmy and Johnny wiped the sleep from their eyes.
They said, "You're going to the haunted chapel? Do you want to die?"
Mikey told his friends not to be silly.
Nothing would hurt or scare him, really.

Soon enough, the chapel could be seen up ahead.
It stood on a hill, along with some trees that were good and dead.
It loomed like a shadowy figure in the night.
Given their expressions, it gave Jimmy and Johnny a spook and a fright.

Mikey couldn't help but laugh at his friends.
"It's just an old building, that's all," he said.
He added, "I'm going in. I don't suppose either of you wants to join me?"
Jimmy and Johnny shook their heads, just as Mikey thought it would be.

Shrugging, Mikey walked up the path to the chapel's blood red doors.
He thought, I bet this place isn't filled with even a single horror.
Just like that, a shadow passed by one of the chapel's windows,
Barely visible in the lighting that was already really quite low.

"Run, Mikey, run!" Jimmy and Johnny shouted as they took off.
Mikey shuddered, but he also could not help but scoff.
It was probably just a bird or a bat, Mikey thought.
He opened the chapel doors, his stomach in just a small little knot.

"Anyone here?" he shouted into the dark past the red doors.
It was so quiet in the chapel, he could have heard a fly snore.
Mikey stepped inside and took a deep breath,
Suddenly now hoping he wasn't walking to his death.

Moving along with the nearest wall, Mikey almost took a fall.
Had something just brushed past his leg in the chapel's hall?
By some small miracle, Mikey found a candle and a match on a table.
With them, he lit the room as best as his shaking hands were able.

As soon as Mikey held the candle up to light the room,
A shadow darted across the far wall in a zip and a zoom.
And what on earth was that sound?
Was that a ghost shrieking on this holy ground?

Mikey willed himself to walk farther into the chapel's depths.
That is, until another strange something rubbed against his legs.
With a jump and a scream, Mikey ran for the door.
He was wrong about this place being devoid of horror!

His dash to the door was accompanied by yet another shadow on yet another wall.
What kind of creature cast a shadow that fast and tall?
Mikey didn't stick around to find out.
He made it outside just in time to hear another haunting shout.

Catching his breath, Mikey stood facing the chapel now.
He was not, in fact, brave enough to endure those sights and sounds.
That chapel would simply have to remain haunted all on its own,
For Mikey never again wanted to enter that spooky zone.

Mikey suddenly realized he'd left the chapel's front doors open.
What was worse, out of them that spooky, haunting shadow was now poking.
The shadow grew taller and bigger on the ground outside the chapel.
With his bravery Mikey was yet again now having to grapple.

He almost screamed and ran away as fast as he could.
Except, it was then no longer a looming shadow that stood.
The shadow became a simple silhouette just like that,
And it was, believe it or not, the silhouette of none other than a cat.

The chapel was not haunted by something sinister and scary.
It was inhabited by a cat, ink black and hairy.
The little feline walked closer, stretched, and let out a sweet little mew.
Mikey looked at it and said, "All of those horrors in there, that was you?"

With a trilling meow, the cat approached and rubbed against his legs.
There was no ghost in the chapel wishing Mikey dead.
It was just a lonely little cat looking for a friend.
And that was, indeed, what the cat got in the end.

The little cat pawed at Mikey's leg until he lifted it up.
It rubbed Mikey's cheek and let out the happiest little chuff.
With a laugh and a smile, he took the cat home and named it Spook,
Who no longer had to live alone in the chapel with no friend but the moon. 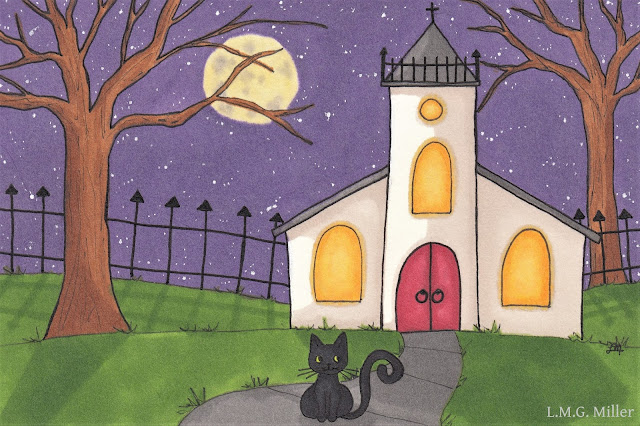 Thimble is of course here to express her gratitude today. So, what is she grateful for? 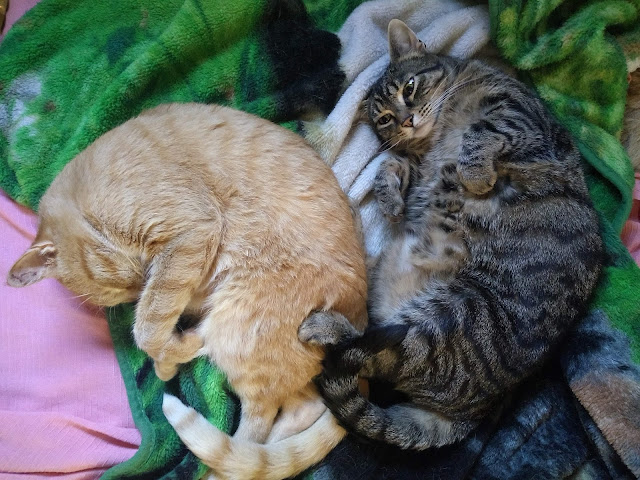 Thimble is thankful for her brother Evan, and for his patience with his furry siblings. None of the kitties here are all that accustomed to cuddling up to each other. They all simply like their personal space. But, when one of them does want to cuddle up to another kitty, Evan is often their cuddle buddy of choice. He himself doesn't seek out other kitties to cuddle, but he is usually the most patient kitty about being sought out and cuddled. As you can tell in her photo above, Thimble is quite thankful for that.
Oh, and how about a little animation that Google was kind of enough to create with the series of photos from this photo shoot?

Yesterday, we shared a bit of trivia on dog and cat nose prints. Regarding that trivia, our friends over at Eastside Cats made a comment about cats sticking their noses in their human's armpits. This is actually not completely uncommon and perhaps not even all that surprising. First of all, as you probably know, our armpits can very heavily smell like us and our sweat. To many cats, the smell of their human is a smell that makes them happy and that brings them comfort, and so the pungent armpit of their human might simply smell like a wonderful thing to a cat. In addition to this, though, the sweat glands of the armpits secrete sweat that contains fat and protein, which might actually make it smell extra good to cats. In other words, a human's armpit might actually smell tasty to a cat. In case you were curious, our resident armpit fanatic is Toby, who will go as far as to nibble his humans' armpits. Tasty indeed, huh?

Posted by The Menagerie Mom at 6:45 AM

OH! You read my comment! I figured The PO'M did that, because he wants to own every square inch of me, but your research seems spot on.
It's just the cold nose part, that makes me jump!
Adorable poem/story. My father's nickname as a kid was "Spook"!

It was a kitty, not a ghost - too fun, I love happy kitty endings! Those sweet snugglers are extra cute this morning.

The animation is just too much! And I love the poem.

A fun poem, although i hope Mikey learned the difference between bravery and bravado there.

What a good brother Evan is to allow the occasional cuddle.

I LOVE the poem- I do love a happy ending, especially hen cats are involved. Cute drawing too. And Thimble and Evan are adorable. Interesting facts too. Rosie loves my hubby's arm pits :)

Love this story! Spook and Mikey got the chapel to themselves in the end. It's almost time to put a little spook in the air - Halloween and Fall are coming and somehow I think it will feel EXTRA NICE to have some cooler weather. Thanks for being Poetic Partners with us every week!!