Some poor little calico had her annual exam at the dreaded V-E-T yesterday. 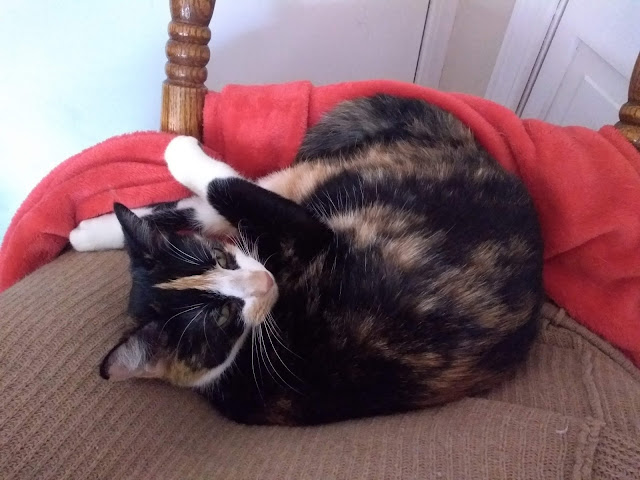 Thanks to a certain pandemic, it's still curbside care at our vet's office. It breaks my heart to send my babies in there without me, but I guess it simply is what it is. Tonks got an A+ from the vet. I was told she's in perfect health, which makes me a happy mom. Tonks was of course very uncertain and nervous, but she's not an aggressive girl and so she just turned into a scared little statue for the veterinary staff. 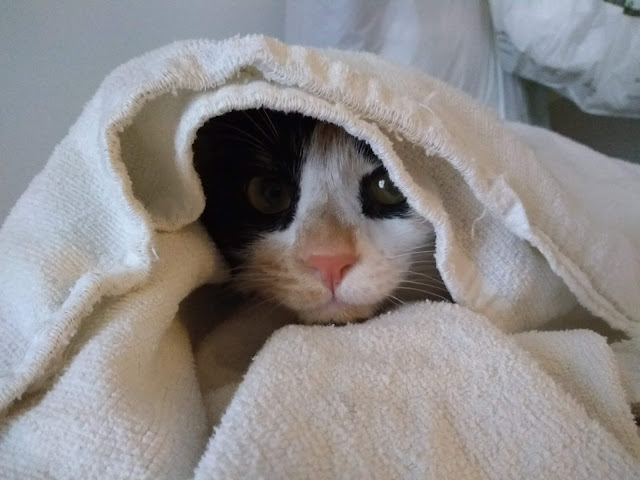 Next up, Thimble goes in for her annual. That's happening tomorrow. Though she gets nervous at the vet, Thimble's always a total sweetheart and never poses a problem. She's also been dropped off at the vet on many occasions because of various ailments and surgeries, so though it makes her nervous (as well as me nervous), I know she's sort of used to being there without me.

Evan isn't due for his annual exam until December. Like most of my cats, he also turns into a statue at the vet. I don't know whether our vet will still be doing curbside care come winter. If they are, Evan won't go all feral on them or anything like that, but he will very likely urinate and defecate on them. That's his go-to defense mechanism at the vet's office. Evan is the only cat for whom I prepare a "diaper bag" when I go to the vet. Said "diaper bag" always contains paper towels, regular towels, Evan's shampoo spray, bags for soiled towels, and all that jazz. If I'm not allowed to go in with Evan in December, I'll have a "diaper bag" ready in case the vet wants to take it in with them. Evan's nervous habits can get very, very messy.

And then there's Eddy. My Eddy girl is still wildly overdue for an exam and vaccinations. That is absolutely my fault. All I can say is that she is the most skittish cat I've ever shared my life with, and she is an absolute nightmare to get into any carrier I've ever tried for her. Eddy was trapped by a local rescue as a semi-feral kitten in the country, and ever since then she has expressed an intense and very violent fear of anything that resembles a cage. She also is terrified of every human who is not me, so unless she gives me a distinct reason to take her in during this pandemic, she's not going to the vet until I'm allowed to go in with her. I've considered at-home vet visits for her, but she she's proven more likely to freeze when at that vet, whereas at home she absolutely panics when strangers enter the house and she becomes impossible to catch or hold. I have also discussed with our vet giving Eddy a bit of sedation to get her in a carrier, but the vet and I both have a suspicion that Eddy's extreme and very physical fear will cause her to override most sedatives that can be given at home. That's not to say that won't be an option to at least try in the future, though.

Anyway, now I'm just rambling. Yet again. As mentioned above, calico Tonks got an A+ at her vet visit yesterday. She's my smallest cat. She's tall but skinny, and she weighs in at exactly 9 lbs. Then again, my other 3 kitties are only 10 to 11 lbs each, so it's not like my cats have a vast range of weights. Our housemates Toby and Winky weigh something like 16 and 12 lbs, respectively, so they're the biggest cats in the house. And then there's pup Astrid, who officially weighed 82 lbs at her annual exam last month.

So, are your veterinary clinics doing curbside care at this point in time? What are your thoughts on curbside care? I both understand it and admittedly dislike it, but the latter could very well be due to the overprotective stance I take when it comes to my furry children.

Today's flashback doodle is sort of in line with the new Edgar Allan Poe series we've been sharing the past couple of days. Sort of . This was actually a doodle I scribbled up this time last year, when I realized it was summer but I still wanted to draw something spooky. 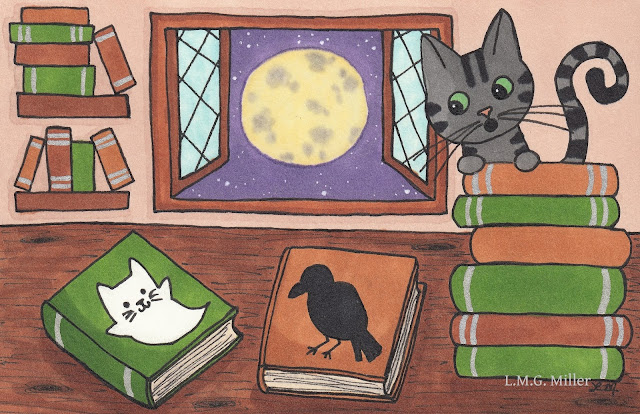 We're not yet done with our Edgar Allan Poe series of doodles, which of course also star Poe's feline companion Catterina. Stay tuned over the next week or so still to see at least a couple more doodles in this series. What's your favorite poem or story by Edgar Allan Poe? I'm quite enjoying scribbling up my Poe-inspired series of doodles, and I would be more than willing to create a couple of extra doodles based on some of Poe's other poems or stories that you friends of ours enjoy the most.

Did you know that 1 lb of extra weight on a typical domestic cat is the equivalent of roughly 15 lbs on a 5'4" woman? Obviously, our kitties at home are smaller than us, which means that any small amount of excess weight they carry can greatly affect their small body's overall health and well-being. For this reason, do your best to feed your cat only a reasonable amount of food, limit their treat intake, help them stay active, and discuss any concerns about weight with their veterinarian.

Posted by The Menagerie Mom at 6:34 AM

We're glad Tonks got a good report from the vet. Our vet is still doing curbside too. It's hard because the mom can't be there with us and to talk with the vet face to face, but it is what it is...and we know it's a temporary situation.

Good job, Tonks!
Veterinarians are still curbside here, as The Island Cats commented (we're in the same metro area!)
Also, vet practises are very busy...appointments are two-three weeks out, unless something dire is happening.
Next on the visit-the-vet list: The PO'M.

We are very happy to read that Tonks got a A+ for their vet visit. We just love these sweet photos and the doodle is just wonderful as well. Thanks for the share. Have a wonderful rest of your day.
World of Animals

Your Poe doodles are the best! It's still curbside here too. I understand it but don't like it. You wouldn't hand your human child off in the parking lot so you shouldn't be asked to do that with your fur child. I don't think Mudpie could handle it either so I'm hoping we can continue to wait.

I am glad Tonk's vet visit went well. I am so lucky our vet is still running like a normal place and letting us in with masks. I know many pets are scared at the vet and should get to be with their human. I like the drawing. Great tips too.

Tonks we're so glad your vet visit was good! We're sending good thoughts for Thimble too! As for Eddy she sounds a lot like Valkyrie. See Valkyrie was a rehabbed feral too. It's very hard to do vet stuff with her. She's delayed for her visit because of covid right now and mom doesn't want to drop her off cause she's so scared and sad.

Hooray for Tonks doing so well at the vet and getting a good checkup. Gracie and Ava are due for their shots soon, and our vet is still doing curbside. It sure is hard not going in with them.

Our vet is back to allowing regular visits with masks.

We've had to leave animals while we went to work so often that it's not that big a deal. In fact, if you are fostering for the shelter, the regular vet only lets foster parents drop off and pick up later, so again, we are used to that.

Hooray for a clean bill of health, Tonks!

While i like Poe, the person (what i've studied of him), i am easily spooked and don't do well with overly scary stories.

We have done everything we can think of to get Dansig to loose weight, and it just does not happen. At least he doesn't seem to be getting any bigger.