Hello and happy Thursday! Let's get right to rhyming, shall we? Today is, indeed, the Thoroughly Poetic Thursday challenge, hosted by Angel Sammy.

Each week, our host shares a photo prompt to help us get poetic. This week's photo prompt is this image here:

I've always found twins to be a very fascinating topic. There are multiple sets of twins in my family, but this photo prompt particularly reminds me of my twin uncles. Indeed, I have two uncles who are twins, and at least when they were babies and young kids, they were essentially identical. It's more or less a game in my family that when we find a childhood photo of my twin uncles, everyone has to guess who is who. I can often ultimately determine which twin is which, but the only ones who get it right every single time are my grandma (their mother) and my dad (their older brother).

My dad is roughly 10 years older than his twin brothers (my dad is the oldest of five boys, and boy does that make for some wild stories). When I was born, the twins were still teenagers. Let me tell you, my twin uncles' favorite game was to trick my sister and myself into thinking that we had called one of them by the other's name, and so on and so forth. Funny, huh? By the time they were that age, though, they actually weren't all that hard to tell apart, so they weren't fooling anyone. Not even my 5-year-old self.

In case you were wondering, another one of my twin uncles' favorite games was to take apart my sister's and my toys and reassemble them with parts and pieces from other, totally unrelated toys. Our toy box ended up looking something like Victor Frankenstein's laboratory. This is what you get when your dad is the oldest of five boys and you and your sister are the first grandchildren and nieces.

Anyway. Did you really want my family history? Probably not, but I sure just gave it to you. Long story short, my poem below was sort of inspired by the photo above, sort of inspired by my twin uncles, and is sort of a mess of a rhyme. It's a long and windy one, kind of confusing, and weird and wacky as per usual. Don't worry, though, I still threw some cats into the mix.

Bobby and Bonnie were happy as could be,
Most especially since they would soon be starting their family.
In fact, their doctor told them they were having twins,
A fact that made them chuckle, clap, and grin.

If we're being honest, though,
Reality soon burst the new parents' happy little bubble.
Bobby and Bonnie were now aware of every parent's struggle,
Except they were learning that struggle in double.
After all, with twins, there was such a thing as double the trouble.

Bobby and Bonnie had brought home two identical baby boys.
They started by trying to give each one his own unique toys,
So that telling them apart would not be such a difficult choice.
Even when they were mere infants, though,
A great deal of orneriness the twin boys did show.
After all, they would oft swap their individualized toys,
So that their parents could not use them to tell apart the two baby boys.

Now, perhaps you'd like to know the twins' names?
Don't worry, their names were not one in the same.
Timmy was the name of one of the brothers,
And Tommy was of course the name of the other.

Timmy and Tommy were not necessarily naughty boys,
But they did enjoy teasing others with ploys.
They oft confused their family and friends,
Of course by making their identities difficult to understand.

Timmy and Tommy's parents tried dressing them in different clothes.
After all, everything else was the same from their head to their toes,
So, their parents thought their clothes could make their identities known.
There was of course just one little catch, though,
And that was that the ornery boys would oft swap those clothes.

Even as infants these sort of games went on.
Timmy and Tommy rarely gave their parents the chance to breathe or yawn.
They would each go as far as sneaking into their brother's crib,
And they were not even above swapping out their namesake bibs.

Indeed, such name games went on for years.
Mixing up their boys was Bobby and Bonnie's daily fear.
One day, though, a solution appeared right there at the front door.
The solution was a pair of visitors, each with legs that numbered four.

Has this rhyme now become as confusing as Timmy and Tommy themselves?
This is more chaotic than a room full of Santa's elves.
Here, let us recap.
This story now has the addition of two cats.
At Bobby, Bonnie, Timmy, and Tommy's front door these cats appeared.
Believe it or not, these felines would soon allay Bobby and Bonnie's fears.

You see, the cats took to Timmy and Tommy right away.
What's more, though, each cat took to a particular boy on that very first day.
This truly was a grand solution to a problem,
Because it would make Timmy and Tommy's identities more solid.

You see, though both felines were tabby cats,
One was grey, and the other far more orange than that.
Willy was grey and the orange one was Wally.
The cats' identities were never a folly.

Bobby and Bonnie were so very grateful for this,
Because now their twin boys' identities were never amiss.
Timmy could no longer claim to be Tommy,
Because the truth of the matter would be given away by Willy and Wally.

After all, there was one boy always accompanied by Willy,
And that boy was none other than Timmy.
And then there was good ol' Wally,
Who of course could be found right alongside Tommy.

For years, Bobby and Bonnie had tried to tell apart their identical boys.
They did not know how to combat the twins' name games and ploys.
The solution, though, was in a pair of non-identical cats,
Who simply showed up at their door and chose their boys at the drop of a hat.
Good golly, who on earth could have imagined that? 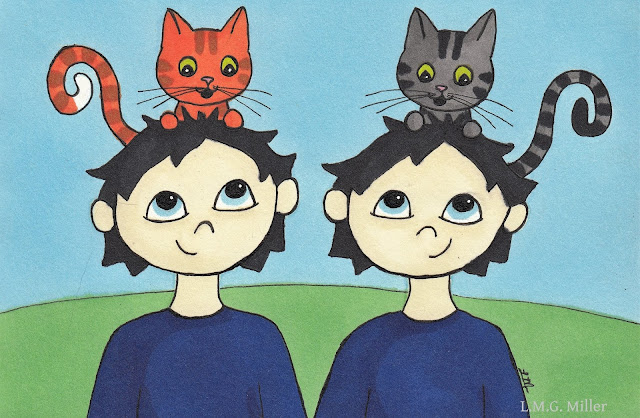 Now it's time for the Thimble and Thankful part of this Thursday. Are you ready? Of course you are. 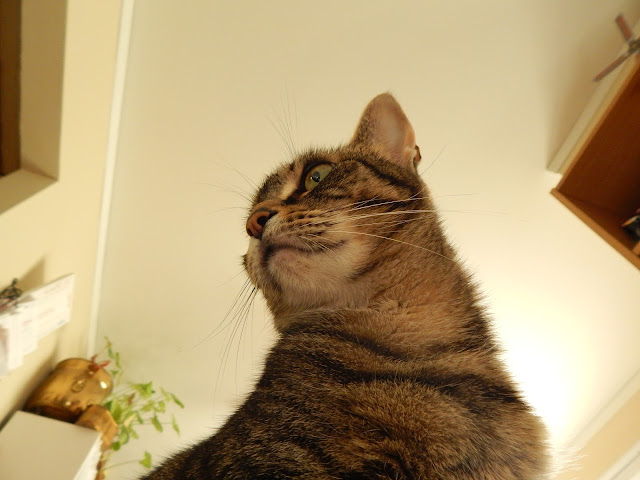 On this Thankful Thursday, Thimble is grateful that she is cute from any and every angle. 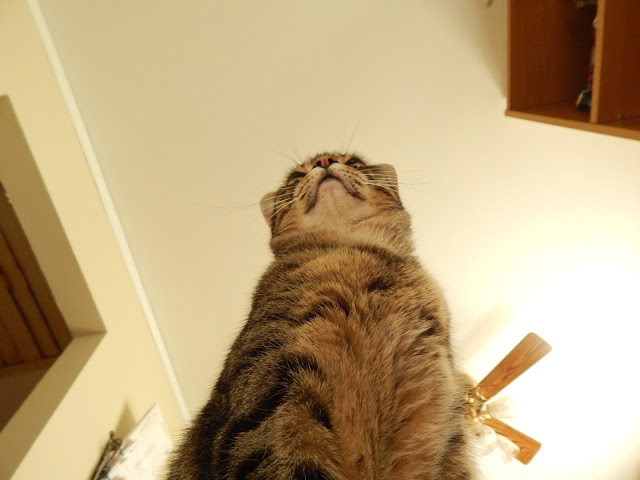 This mom of hers here is equally thankful for Thimble's adorableness. Thimble's face, and her short little legs, and everything about her makes me happy. Thimble hopes she helps you all feel happy, too.

As always, we're also of course so very grateful for all of you. Thank you for being our wonderful friends!


We wouldn't finish out this post without sharing the fill-in statements for tomorrow's Friendly Fill-Ins challenge. If you'd like to participate, those statements can be found below. Ellen of 15andmeowing is the mastermind behind the first two, and I came up with the second two.

***
Did you know?
Did you know that kittens in a litter can have multiple fathers? What's more, did you know you'd be getting a lesson on feline reproduction today? Cats are induced ovulators, which essentially means that the act of mating itself causes eggs to be released from the ovaries of a female cat in estrus. Furthermore, a female cat in estrus will often mate with more than one tomcat in a short amount of time, and any eggs that are released from the ovaries could be fertilized by any given male with which she mates. And that is why kittens from the same litter can have different fathers.
Posted by The Menagerie Mom at 5:00 AM

You really are a good looking kitty, and you model well too!

Hi there Thimble. Great pictures of you. You are a cutie patootie. Have a super day.

That's a funny story about putting the toys back together with other parts and we enjoyed your poem too. We always enjoy seeing you pretty Thimble and thanks for joining the Thankful Thursday Blog Hop!

My nieces are identical twins, but as babies and children, we'd only see them a few times a year. So, every visit, we'd all start out trying to figure out which one was which, then would have to start over again on the next visit!

Thimble you are definitely cute from every angle sweetie.

That was a fun poem and such a cute drawing to go with it ) Thimble is a cutie. ANd Yes, I knew that about kittens having different daddies sometimes :)XO

Thimble, you're too cute for words, and your mom is too creative for words!

My Sweetie and his brother used to swap for classes sometimes. They tell a really fun story of the time Brother-in-Law did something wrong and their dad spanked the wrong twin. He felt so badly he treated that one to a milkshake every day for a week!

I totally enjoyed your family history story! My family is full of twins, too. My brothers are twins. My maternal grandma's mother was a twin. My daddy's maternal grandma was a twin, and there are many, many sets of twin in the family of my birth father (that I'm only now learning of). I prayed for twins, but never got them. Maggie and Davey were pretty darn close, though. They were just over 13 months apart and were the Dynamic Duo of the family, always together, getting into stuff, and planning how to give us all heart attacks, either literally or through laughing ourselves into one. :)

In regards to your snippet about cat reproduction...does it work the same way with dogs? Battly and Petra were from the same litter, but looked absolutely nothing alike. Petra looks like the blend she is, Jack Russell Terrier and Chihuahua, but Battly looked like a tiny German Shepherd (and was absolutely the sweetest little thing!).

Such a GREAT poem...couldn't be cuter if it tried! I am sure that twins everywhere take a bit of advantage of their situation and pull pranks like changing clothes just because - well - WHY NOT?! It's got to be fun. I do love how twins are definitely on the same "wavelength" though and often complete each other's sentences. I find that fascinating. Anyway, GREAT JOB on the poem and also on showcaseing the adorable Thimble. Love the "from the floor up" shot especially!

Your poem is better than anything I can do!