Happy Thursday! Let's get right on with our rhyming, shall we? Today is, after all, Angel Sammy's Thoroughly Poetic Thursday challenge.

Our host wouldn't leave us lost at sea, so every week we get a photo prompt to guide us. This week's prompt is this adorable one here:

I have always thought that penguins are incredibly adorable, especially the insanely cute and fuzzy babies. That's probably why I was so excited that, back when I was in high school, the movie Happy Feet came out. This film is about a young penguin who learns that he, believe it or not, loves to dance. The image above made me think of that movie, and so I tried to write a poem inspired by it. The truth is that my poem didn't really come across like I intended it to, and it's certainly nowhere near as cute and fun as the Happy Feet movie that inspired me. Nevertheless, here's said poem:

Pete was a penguin, and a happy one at that.
He actually quite loved to socialize and chat.
In truth, everything made Pete happier than happy,
From dancing, to singing, and even to napping

Pete the happy penguin had one mission in mind.
A fun time with friends he wished to find.
And so Pete put on his thinking hat,
In search of a way to achieve just that.

After days and weeks and months of deliberation,
Pete finally waved his flippers in the air in celebration.
"I know exactly what to do!" Pete shouted and clapped.
Around his house he could not help but dance and tap.

Pete the happy penguin got to work day in and day out.
He took very little time to rest, and none to pout.
Each day he would disappear into a building boarded up,
Once even carrying inside a giant stack of plates and cups.

Friends and family asked Pete what he was doing,
But he would simply smile and say he had something brewing.
Everyone had lost track of time when the day arrived,
When Pete declared that he was ready to reveal his surprise.

Friends and family came from far and near,
Curious what they might see and hear.
His parents were the first to arrive at the party,
Closely followed by his friends Timmy the Tabby and Munchkin Marty.
Outside of the mysterious building where they gathered there stood a sign.
Grand Opening!, that's what it told the people in line.

"What are you opening?" a friend asked Pete.
He clapped and said, "In just one moment, you will see!"
Pete the happy penguin did not make those in line wait much longer,
Which was good, because their curiosity grew stronger and stronger.

After a singsong countdown,
And not a single hint of a frown,
Pete declared, "Go on in and have a look around!"
All those in attendance did just that.
What they found inside made them smile and clap.

Inside, counters and cases of countless cookies and cakes could be found,
As well as dozens of tables and chairs for everyone to sit down.
It was a bright and happy place to be,
And Pete told them all to dish up dessert and have a seat.
He promised a grand show for them all to see.

When all plates were filled with sugary sweets galore,
Pete the happy penguin promised this place would never bore.
"I wanted a place where friends of all sorts could gather," he said,
"And of course a place where I could entertain those friends."

With that, Pete the happy penguin put a top hat upon his head.
"Enjoy the show!" he twirled and said.
He then grabbed himself a baton,
And a grand show was indeed put on.

Pete did all the things he enjoyed the most.
He sang and danced, all while being a perfect host.
He made sure all of his patrons had plenty to eat,
And that they were never lacking something tasty and sweet.

For hours, Pete sang happy songs and danced on his happy feet,
All while his patrons sat in good company to scrumptiously eat.
The place was called none other than Happy Pete,
And it was, indeed, the happiest place to be. 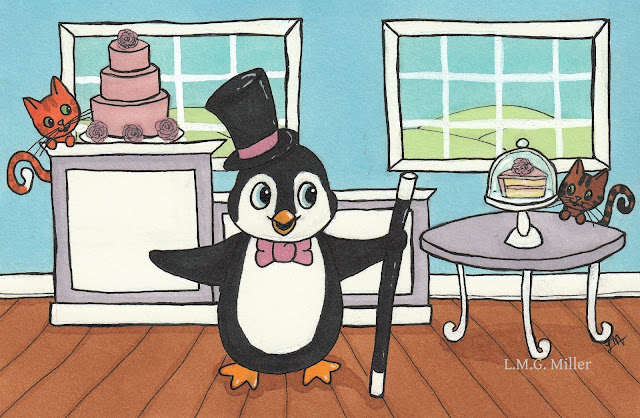 Today is also, of course, Thankful Thursday. This blog hop in honor of the wonderful thing known as gratitude is hosted by Brian of Brian's Home.

Today, we are not only thankful for our blogging friends, but also for the talents all of those friends possess. Today, we are particularly grateful and happy for Ellen of 15andmeowing, who has thus far written and published two children's books based on the heartwarming stories of two of her kitties, Prancie and Emmy. These books are called Prancie's Prayer and I Am Not a Skunk, and they are beautifully adorable tales of rescue. I am very late in posting about these sweet stories, but I hope better truly is late than never. 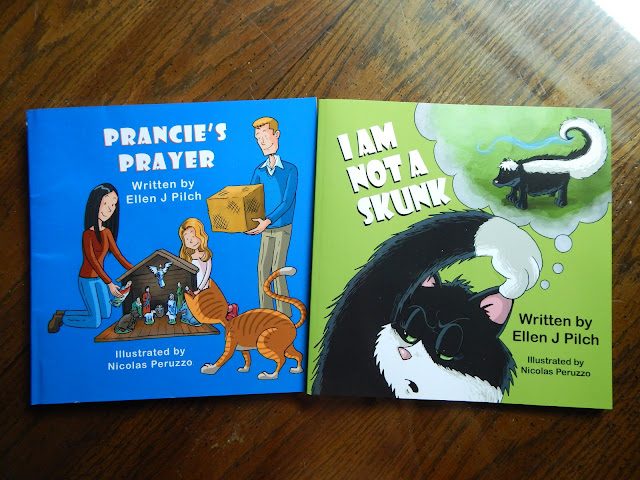 I tried to get certain kitties around here to pose with Ellen's books. I even tried to recruit the help of the resident librarian, Thimble. The thing is, while the kitties certainly showed up for the photo shoot, they simply couldn't manage to properly pose for it. 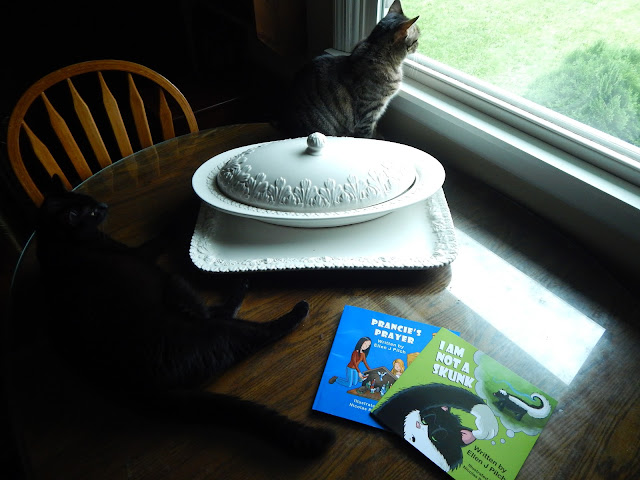 Most of the photos from this shoot would easily be categorized as bloopers, but that doesn't diminish how happy we are that Ellen has written such touching stories about her kitties. Honestly, these photos are probably just bloopers because the kitties were so excited by Ellen and her kitties' terrific tales. 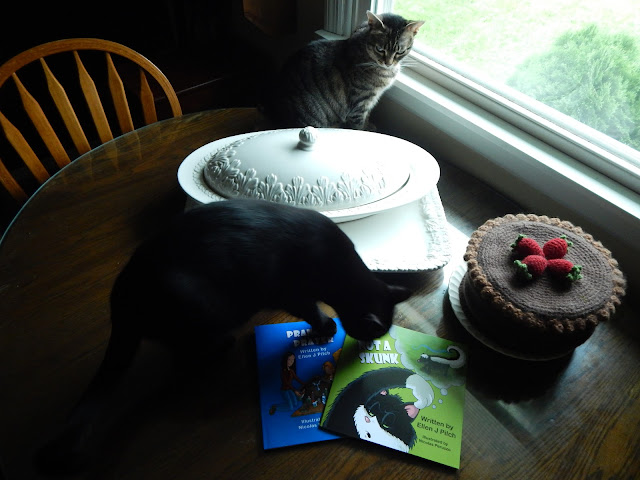 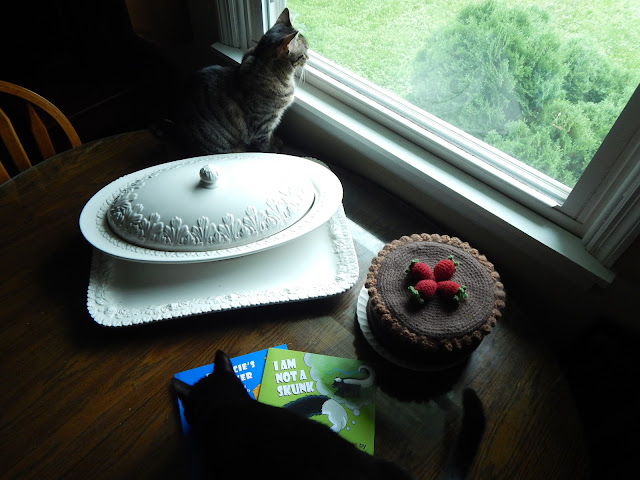 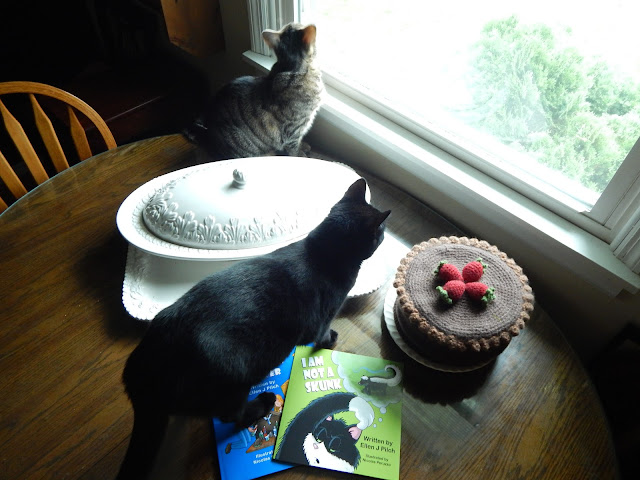 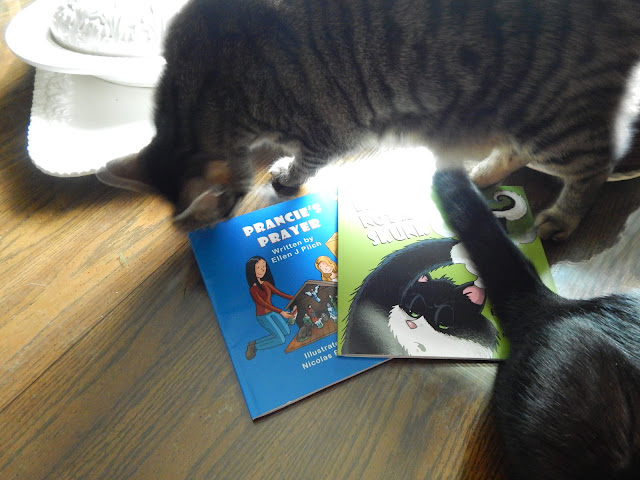 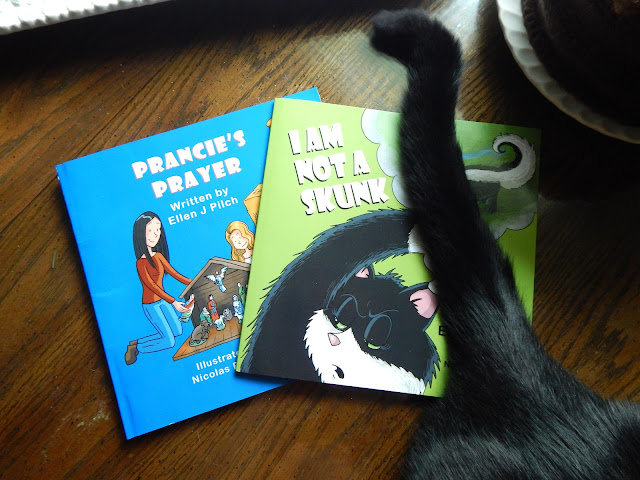 Have you read Ellen's wonderful books yet? Have you gifted a copy to any of the children in your life? If not, you can find Prancie's Prayer and I Am Not a Skunk by clicking on their titles. The books contain such heartwarming tales of animal rescue, and the illustrations are downright adorable. You won't regret reading them!


Last but not least, we have for you the fill-ins for tomorrow's Friendly Fill-Ins challenge. The same author Ellen as above, of 15andmeowing, came up with the first two, I came up with the second two.

Did you know?
Did you know that, though they're much smaller, our cats have more bones in their bodies than us humans? Cats have 244 bones, whereas humans have 206 bones. One area in which cats have more bones is their spine, which is why they are far more flexible than us comparatively stiff humans. This goes to show that the skeletal system, as well as the muscular and other similar systems, has a lot to do with how an animal can move.
Posted by The Menagerie Mom at 3:55 AM

Pete is adorable in the doodle as well as in the story-poem you crafted from the inspirational photo this week! I always look forward to seeing what kind of fun you've had with the photos and it's always something that's a JOY to read!

I just saw Happy Feet 1 & 2 for the first time. Is it wrong of me that I want a baby penguin?

Penguins are very cute and we love that picture of those two.
HOpe all of you have one heck of a good day.

That was a fun poem, go Pete go! Those books are sure wonderful. Thanks for joining the Thankful Thursday Blog Hop!

While reading your story, I was thinking about the baby penguin that appeared in an old Bugs Bunny cartoon, when Bugs misread his map and showed up in the South Pole by accident. The wee penguin cried when Bugs said that he couldn't go with him, and his tears fell as ice cubes.

Fun post today, thanks! I love seeing the kitties, they're darling even if they didn't pose the way you wanted them to.

That was a terrific poem. We love penguins and remember seeing Happy Feet movie with the family when it came out. Maybe next photo shoot you will be able to get a good photo with the books. Thanks for the share. Have a great day.
World of Animals

What a fun place, dessert and entertainment, i like that poem!

That was an excellent poem- as always. I love the drawing too. And thank you so much for the shout out on my books. I am glad you like them. And yes, i knew cats had more bones- they sure are more flexible than we are. I look forward to your fill-ins. :) XO

Cute poem and doodle! We haven't read I'm Not a Skunk yet, but we luved Prancie's Prayer.

I love penguins! Have you seen The Pebble and the Penguin? And March of the Penguins? And we adore Ellen and her books.