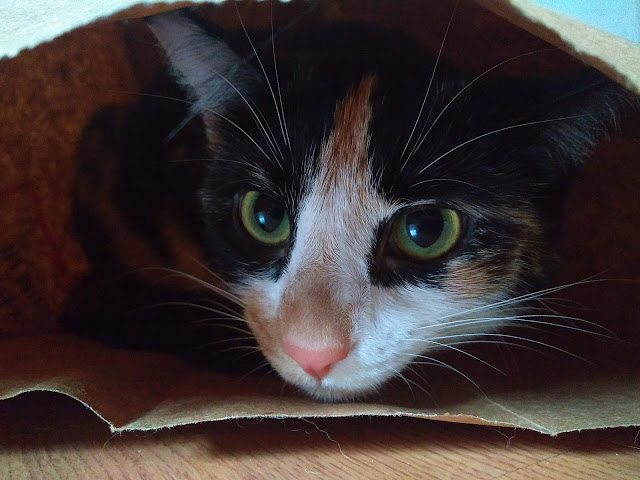 I have learned that if I can't find Tonks, I need to look inside anything and everything that would fit her like a glove. She's a petite and flexible girl, so I have found this ornery calico hiding in some tiny spaces. In fact, do you remember the photo below from yesterday? 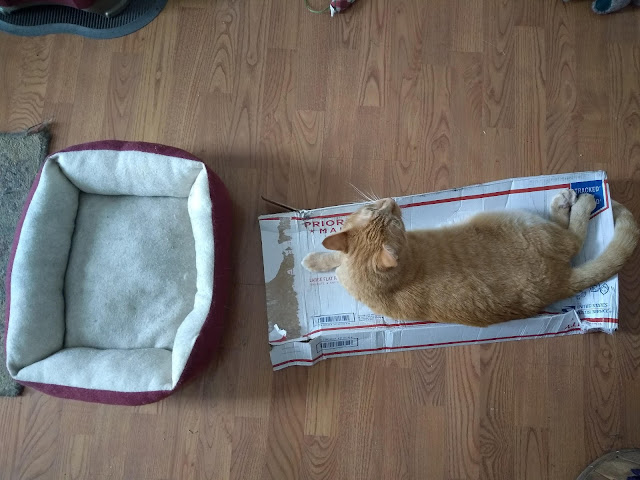 You can probably tell that the box Evan is lying on is one of those long albeit flat shipping boxes. It's roughly 2 inches in height, and yet Tonks can fit inside that thing. She just flattens herself out and wiggles on in. Don't worry, though, she wasn't inside the box when Evan decided to take a nap on top of it.


***
Flashback Doodle of the Day

One of our Thanksgiving doodles from last year starred Tonks and a certain pup named Astrid. 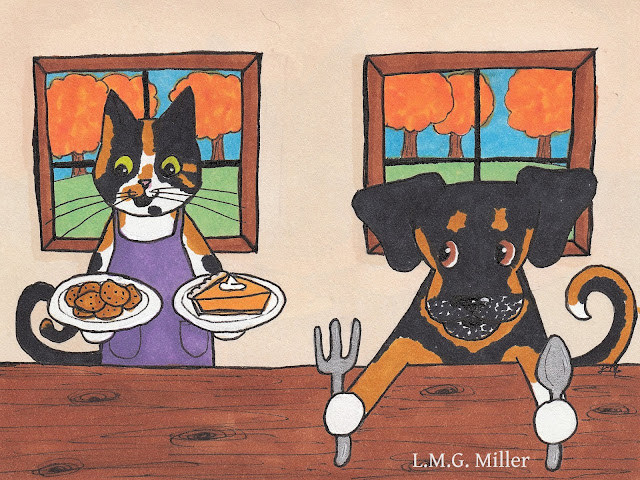 I find this doodle even more fitting this year than it was last year. Tonks has really started to take to Astrid more than she used to. She's always tolerated her pretty well, but at Tonks's request, she and the pup always had a long distance relationship. That is, until recently. These days, Tonks enjoys chasing Astrid as well as rolling in Astrid's leash, and sometimes even rolling around directly on the pup's feet.

We've previously mentioned sweet potatoes and green beans, and how these vegetables are safe when fed plain, but are best left out of your furbaby's diet if prepared in a casserole or with other added ingredients. Today, we're here to remind you of some of the other vegetables that could make for nice Thanksgiving treats for your pup or kitty, of course as long as they are fed plain. One common and nutritious vegetable is carrots. This orange vegetable can provide a large variety of beneficial nutrients, such as beta-carotene, vitamin C, vitamin K, potassium, and others. Other veggies that are generally safe as a snack for a kitty or pup include broccoli, celery, cucumbers, spinach, and peas. So, if you're pup or kitty wants to be included in the Thanksgiving feast, go for a safe and healthy option, such as a plain vegetables. Of course, though, even when it comes to veggies, it is still best to feed them to your kitty or pup in moderation. And, as you've heard us say many times now, always be aware of any ingredients that are added to foods prior to feeding them to your furbaby. If a veggie dish has been topped with onion, garlic, excess salt, or other similar seasonings, then it is no longer an ideal or safe treat for your kitty or pup.
Posted by The Menagerie Mom at 12:00 AM

Some cats seem to be "part bat" loving caves, closed up spaces, being under everything or in everything. Teddy's an "out there" guy and has never been one to get in bags or boxes. Very unlike Angel Sammy in that way - Sam's favorite thing was when I'd make a tent with pillows and afghans...he's stay in there all day!

Cats do love to squeeze themselves into most anything. But boxes are the best. Have a fine day.

I've been known to squeeze myself into those types of boxes too. ~Ernie

That first photo is just darling!

Andrea and the Celestial Kitties said...

It's amazing what tight spots they can squeeze into!

Manny will jump onto a bag or box that CB has wriggling into, or vice versa! Must be why they wrassle so very much...

Look at that precious little face!

Such a cutie. That is funny that she can get into that box :) Cute drawing and excellent tips too.

We have a bag lover, too, but he isn't quite so flexible. Dansig needs a king size bag!